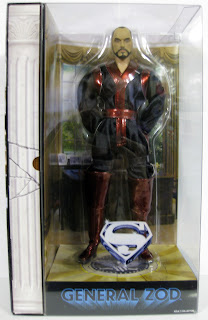 I ordered Superman on December 15th when Mattycollector.com offered him. I decided that if General Zod was still available that Friday (payday) I’d go ahead and order the Man of Steel’s Kryptonian nemesis, as well.
Does it end up working for the figure? Or should Zod be working it on a corner? Find out… NEXT!
I initially avoided Zod because I just couldn’t deal with the metallic red detailing on him. And the matching hooker boots. Mattel insisted that all that stuff really was that particular shade of ruby in the movie – we just didn’t remember it like that. 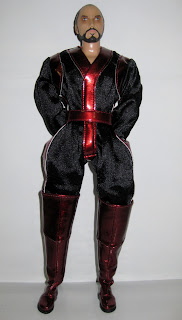 First Glance: Zod is immediately more impressive than Superman and the red actually looks pretty cool. Not nearly as bright as the photos on the website made it look. 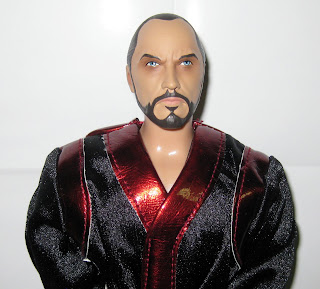 Sculpt: Zod has what has become pretty standard 1/6th scale articulation – double-jointed knees and elbows, ball-joint hips and shoulders, ankles wrists; etcetera, etcetera. His body moves in pretty much any way you might want it to. Except for his neck. Just like Superman, the General just has this meat post sticking out of his shoulders with a loose (but not as loose as Kal-El’s) ball-jointed head on top. It doesn’t matter quite as much with Zod, but it’s still irritating that Mattel chose to do this poorly.
Zod's feet look too damn small, but that's actually a design issue. 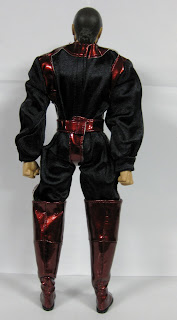 Design: Just like with Superman, this figure’s face would look so much better if Mattel had opted for glossy paints on the eyes. Other than that, his head looks very good. The paint apps make an already outstanding likeness of Terrance Stamp look even better. As a matter of fact, Zod looks so much better than Kal-El I’d say completely different individuals must be responsible for the designs.
Zod’s outfit must have been a challenge. I’m always impressed by fabrics that look correct on a smaller scale and Mattel almost got it right here. I don’t know that there is a fabric that could accurately recreate the lightness of the evil Kryptonians’ clothing at 1/6th the size – particularly for the budget Mattel had to work with. Remember, these figures are sixty bucks. They aren’t the $100+ works of art that Hot Toys and Sideshow produce. They are still toys. Given that, Zod’s clothes look pretty great.
Except for his hooker boots. They flair out too much as they go up his leg, making his feet look extra-teeny-tiny. And stupid.
Not only do the red parts look just fine, I actually like them now that I’ve seen them in person. But there’s no getting around the fact that this guy’s wearing hooker boots. 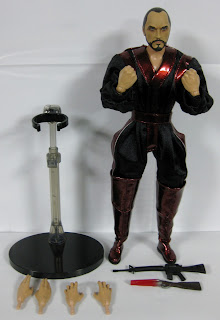 Accessories: The General comes with the same awesome stand that Superman had. I really am impressed with the construction of that stand. I do think it would have been nice to put some sort of design on it, though. Even the movie logo in black would have been fine.
You also get two pairs of alternate hands; for a total of three sets – fists, “in-flight” hands and “aaaargh” hands. As in “Aaaargh, it’s Kal-El, son of Jor-El!” 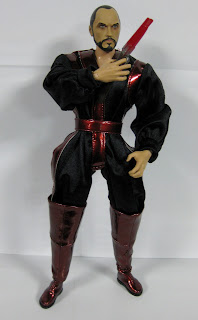 Zod also includes some accessories that I find kind of funny. He has a bendy assault rifle and a shotgun with a “Heated Up” melted barrel. Good idea, but it’s funny that a super-powered being from another world comes with a couple of Earth guns. Also, they're super-tiny and look pretty stupid. Boo. 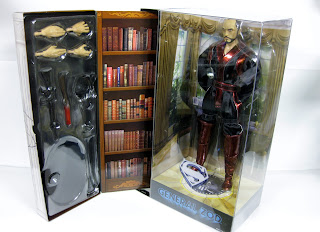 Packaging: General Zod’s box didn’t open any more easily than his nemesis’ did. This design looks fantastic, but should really be consistent with the Ghostbusters’ version as far as how easy it is to open and retain afterwards. 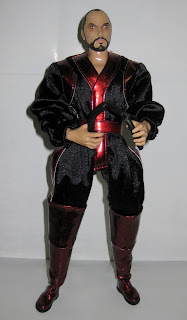 Overall: I really like Zod. I’m not sure I would think as much of him if I hadn’t gotten that disappointing Superman first. But I did, so General Zod gets
3 out of 5 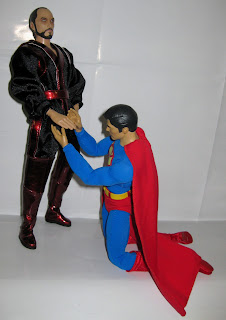 That may seem a bit high for a toy I don’t love, but it is fair. You’ve got to take that price into account. Naturally, that means I don’t think you should pay a cent over sixty bucks plus shipping for this one. Shockingly, both are still available on Mattycollector. I’d recommend against them, but if you have to have them for some reason, get them from the source while you still can. Or, better yet, buy mine! Seriously! Make me an offer! 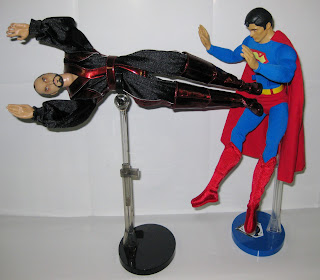 In all honesty, if I hadn’t had to destroy the packaging to get them open, Zod and Superman would both be on eBay right now. I don’t outright hate them, but they are easily my biggest toy buying regrets of last year. I thought that would end up being the bunch of Transformers I ended up buying due to some kind of weird Cybertronian impulse right before the end of the year, but I’m still perfectly happy I bought those. 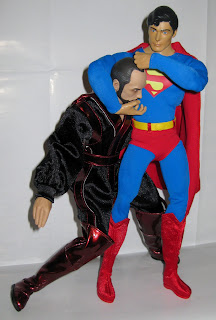