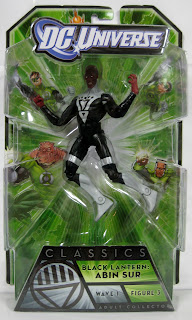 I had zero interest in this figure the first time I saw it. I’ve collected a good number of DC Direct’s Black Lanterns and I really did not intend on buying any that might come up in a DC Universe line. I think the concept of the Black Lantern lends itself more to DC’s way of doing things than Mattel’s. They need to have weird shoulders and bad posture and all the stuff that DC Direct likes to do.
But then I found out that Arkillo was the build-a-figure and knew that at the very least I was going to open this guy and play around with him a bit before he went up on eBay. Did he turn out to be a keeper? 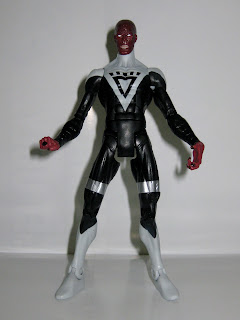 First Glance: It’s funny, no matter how I position this guy his head ends up being shadowed in that first package shot. Creeeepy! That being said, he doesn’t do much more for me in person than he did in pictures. Let’s open him up… 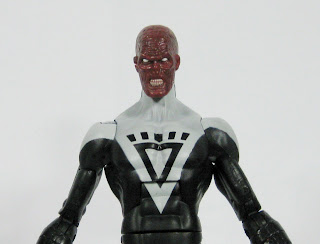 Sculpt: I believe this is the Sinestro body. Whatever it is, it works. Especially the – drum roll, please – double-jointed elbows! Which, it turns out, are critical to this figure’s success. He has the regular knees, but that’s okay. Black Lanterns pretty much just stand around yelling anyway. Not a lot of squatting action. Or riding motorcycles. Other than the elbows, Sur has the standard DCUC articulation.
His head looks absolutely evil. For such a normally bland, pink-headed character Abin Sur makes a surprisingly good space zombie. He may well be the creepiest figure Mattel had produced in the DC lines, and that’s including Desaad (who I just realized I do not have and have never seen at retail).
Sur’s hands are also suitably fiendish. His right is a pruny fist sporting a Black Ring and his left is a weathered claw that looks ready to rip your throat out. 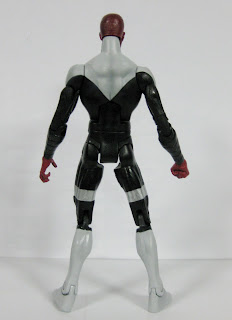 Design: Abin Sur has a very nice paint job. His exposed fleshy bits are repulsively detailed and his beady little eyes look… hungry. He’s got hungry eyes, one look at you and he can’t disguise… that he wants to eat your face.
White must be easier to deal with than yellow. Everything is tight and there is no bleeding. And I guess that’s pretty much it. 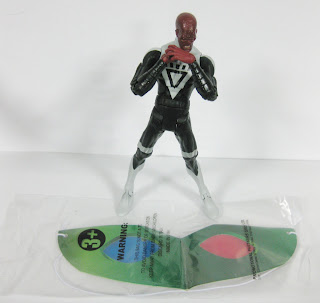 Accessories: Nothing. Just those 3D glasses. 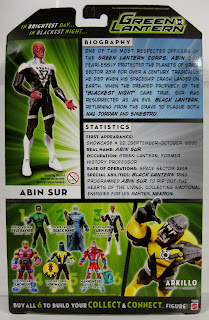 Packaging: I like the GLC packaging quite a bit. Not only is it a nice break from the yellow DCUC look, The blisters themselves have a new and interesting shape. Not to mention the holes punched in the side that allow you a nice pre-purchase whiff of that sweet, sweet New Toy Smell.
However.
Ahem.
CURSE YOU, MATTEL AND YOUR ABSOLUTE FUCKING INCOMPETENCE WITH REGARDS TO YOUR DECISION-MAKING ABOUT HOW TO PACK FIGURES.
Abin Sur is packed into the blister card in some unnecessarily goofy fucking position that totally warps both of his legs. I am sick to fucking death of having to run Mattel figures under hot water. Listen; have you ever – ever – passed on a figure because it wasn’t posed dynamically enough in the packaging?
Me either. I’m sick of this shit. 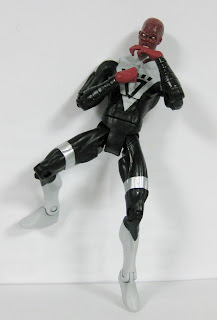 Overall: I think this guy that started out as a pass might be a keeper. Once I put him in the creepy pose and got to stand him around a little I ended up liking him a lot. Unless I see him going for some ridiculous amount loose on eBay he’s staying over.
5 out of 5
You may or may not want an undead Abin Sur or specter of his memory or ghost from a parallel dimension or whatever the heck the Black Lanterns turned out to be. But if you want a DCUC Arkillo you’re sure going to end up with one. I ended up liking him. 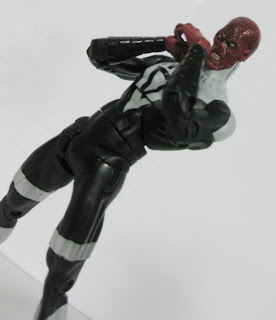