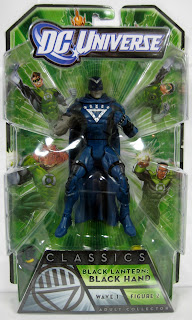 Obviously Mattel was going to do at least one Green Lantern-centric line of DC Universe Classics. I just didn’t expect them so early. I preordered Series 2 from BigBad because I knew I wanted the whole set and absolutely had to have STEL – the build-a-figure. For some reason, though, I didn’t know that the Series 1 build-a-figure was Arkillo until later on. I had already preordered the three must-have figures from Series 1 – Kyle Rayner and two of the Low/Maash sets – from Amazon because they were initially offered at $14.99. This is the retail price, and as we all know if you top $25 you get free shipping. It seemed like the thing to do. I also wanted Black Hand, but I wanted to see him in person first. I didn’t care about Black Lantern Abin Sur or the Manhunter and I specifically didn’t think I needed Mongul because of the gigantic DC Direct version (and we’ll get to that later).
But then I found out about Arkillo and he looked a lot better than DC Direct’s version (despite his tongue being in his head rather than around his neck) so I ordered the rest of Series 1. I reasoned that I could unload the loose figures I didn’t want on eBay and get back at least a little of my money.
And then I ran across the entire series - except for Green Lantern Rayner – at Toys R Us the other day. This was shocking for a couple of reasons: 1) I rarely find anything at Toys R Us anymore. I would say I get 40% of my toys at Target, 30% at Walmart, 20% online and 10% at TRU. Toys R Us’ prices are too high and they don’t ever seem to get restocked on the lines I collect. 2) They actually had an almost complete set that hadn’t been pillaged by employees or scalpers, complete with the Low/Maash packaging variants.
So I bought what Toys R Us had and cancelled my Amazon order as soon as I got to the parking lot, though I still have Rayner pending.
Overall, I am pleasantly surprised by this initial series of Green Lantern figures. But we’ll get into all of that over the next week… 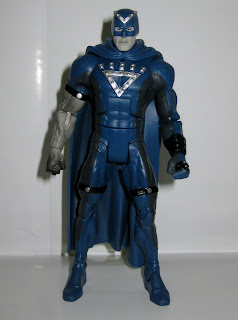 First Glance: Black Hand looks really cool. If I had seen this in person before I would have preordered him from Amazon along with the initial two. 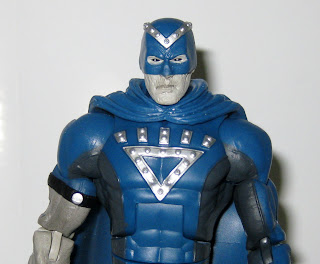 Sculpt: I’m going to go ahead and say this is one of the very best figures Mattel has produced in the DC Universe line in this scale.
Black Hand’s articulation is the best we’ve seen since the Jamie Reyes Blue Beetle, and I would rate it a bit better simply because he looks a bit less weird proportion-wise. The figure has the standard DCUC articulation, but with double-jointed elbows and knees. And these double joints are some of the nicest I’ve seen from a US toy company. Action figures have come a long way since Toy Biz’s initial Marvel Legends offerings. All of the points of articulation on my figure work just fine, with no assembly errors or weird bent parts. His neck movement is a bit more restricted than I’d like, both by his cape and by poor design; but there’s only so much looking around I need this figure to do.
The head sculpt looks great, with a very good likeness of the villain. He has the weird mask that doesn’t go all the way down and all the little rivets are sculpted rather than painted.
Which brings me to the rest of the figure. His costume is sculpted absolutely fantastically. Rather than simply painting on the details of Black Hand’s costume – a move that probably would have been perfectly acceptable – Mattel sculpted on the seams and logo. It looks outstanding and really sets a new standard for what the company should be doing with fifteen dollar figures. I am still somewhat resistant to that price point (though obviously not strongly so) and feel that Black Hand goes a long way toward justifying it. While his stiff cape does make the added articulation a bit superfluous (he doesn’t exactly look awesome squatting, which is generally the first pose you put a super-articulated figure in), I still really dig this guy a whole heck of a lot more than I thought I was going to. Hopefully high-quality sift-goods capes aren’t too far off in this line. But just capes. I draw the line there unless we’re talking about MEGO-style stuff. 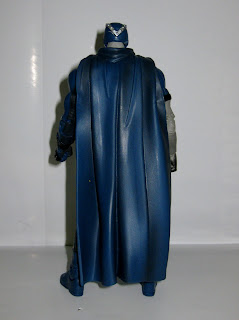 Design: Black Hand’s paint job is about as close as Mattel gets to flawless. There is no bleeding anywhere that I saw and the colors are accurate and bold. All of the little details are exactly where they should be – his eyes, all the rivets, his logo. I hate to be impressed by things as necessary as accuracy and precision, but Mattel does not have the best track record in the paint app department, particularly in the DCUC line. 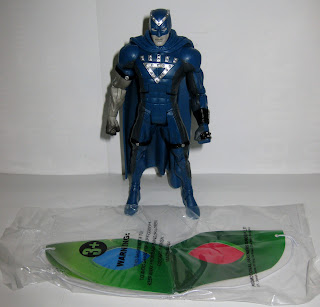 Accessories: I’m not sure how I feel about the almost complete lack of accessories in the DCUC line. With all of the recent purchases I have made in the GI Joe Pursuit of Cobra series, it’s a bit of a letdown to buy a figure with no pack-ins. Well, I can’t say no pack-ins. You do get an absolutely hideous pair of cardboard anaglyphic 3D glasses in the shape of Hal Jordan’s mask. Which I felt the need to take a picture of with each figure in the series. I mean what else was I going to put here?
Apparently the glasses are for some website you can go to. I haven’t and likely won’t because I can’t see video 3D due to some weird eye condition. Packaging: I like the GLC packaging quite a bit. Not only is it a nice break from the yellow DCUC look, The blisters themselves have a new and interesting shape. Not to mention the holes punched in the side that allow you a nice pre-purchase whiff of that sweet, sweet New Toy Smell. I love that on the back of the package Black Hand’s listed occupation is “Conqueror”. 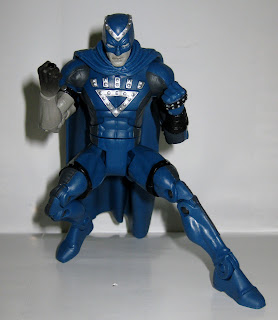 Overall: If you are any kind of collector of DC Universe Classics or the Blackest Night storyline I have to recommend this toy. As a matter of fact, I think any toy collector should own Black Hand because he may well represent a turning point for the DC lines from Mattel. He is just far enough above the quality of the rest of the line that I really feel a new standard has been set, and enough of the other figures from Green Lantern Classics Series 1 feel the same way that I think 2011 is going to be a very exciting year for Mattel, DC and action figure collectors.
5 out of 5
Seriously, just buy him.
Until next time, stay creepy
-Phantom
Posted by Phantom Troublemaker at 1:00:00 AM