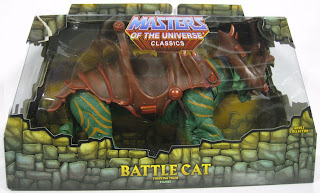 Battle Cat was first offered back when I still thought I was going to get away with only buying a very small percentage of Mattel’s Masters of the Universe Classics toys. Since then more and more figures have been awesome enough to whittle away my resolve. First I was only going to buy people with skull-looking heads. Then I was only going to buy villains. Then I decided I just had to have Moss-Man, then a He-Man, and it’s been all downhill from there. I’ll still skip one every once in awhile. I have no plans to buy Buzz-Off this month and I already know I’ll be putting some of my subscription figures up on eBay next year. Yeah – that’s how bad it got. I ordered the subscription for 2011.
So when I saw Battle Cat being offered again on November 29th I knew I’d have to get him. I never had a Battle Cat when I was a kid and always wanted one. Especially once Matty let slip that Skeletor’s feline steed, Panthor, was on the way next year. Dammit. I don’t even like cats. 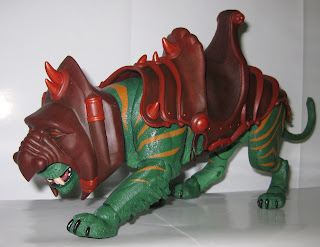 First Glance: I feel like this guy was a bargain for thirty bucks. Twenty seems a bit high for the normal figures, but thirty just seems like a deal for these oversized ones. Battle Cat looks great in the box, which is appropriately old-school. 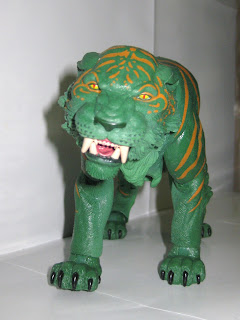 Sculpt: Battle Cat looks very, very good and is amazingly articulated. His face is vicious, which pretty much rules out the possibility of this being Cringer; but we never really had a Cringer figure anyway. I don’t think I’d buy one if they made him. On my shelf He-Man is He-Man, Battle Cat is Battle Cat and Orko doesn’t even fucking exist. Battle Cat’s body has a great assortment of fur sculpts, with a nice texture covering most of him and longer, ruffled detailing around the neck. It really looks good. He has a ton of articulation. His jaw is hinged, he has two points on his neck, one behind his shoulders, one at his tail. His limbs each have three points. Unfortunately, the joints in his neck are too loose, so Battle Cat cannot hold his head up when his headgear is on. It doesn’t make the toy look bad or anything (as you can see in the pictures), but it does reduce the joint’s usefulness. 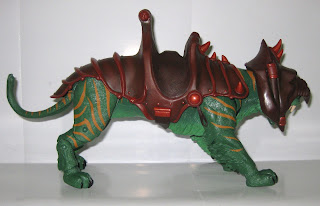 Design: I am a huge fan of the shades of green and yellow Mattel went with. They are dark enough so that Battle Cat doesn’t look too cartoony, very much in line with the old pack-in comics. The updating is where this figure really wins. He has lighter shades of green underneath his torso and around his face that really look amazing. As a matter of fact, I think Battle Cat’s face is one of the best paint jobs I have seen in this line so far. It looks so good I almost don’t want to put his headgear on. The only issue I have is that his stripes almost stand out too much. I think maybe they should fade into the green a bit more. Maybe not, it certainly isn’t a big deal.

Accessories: Battle Cat comes with his signature red saddle and headgear armor. They are both easily removeable. As a matter of fact, the headgear comes off a bit too easily. I don’t know if they should have made a chinstrap or just sculpted it so that it would fit more tightly around his head, but it doesn’t attach to the figure’s head at all. The saddle fits very well and uses an old-school peg-in-hole to fasten. Both pieces have fantastic paint jobs that really get across the look of red armor pieces attached to dyed leather. Once again, Mattel has updated monochromatic accessories to look believable and detailed. He-Man fits in the saddle very well thanks to the loincloth-accommodating notches set in the front and back, but he still looks a little too big to be riding this giant kitty. The scale isn’t off or anything, I just think they look funny. 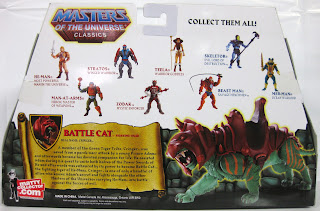 Packaging: Battle Cat comes in a big ol’ box that is very reminiscent of his original packaging. It is a new design that you can bet will be reused for Panthor and probably nobody else. It looks nice and will naturally fit in with the rest of your MOTUC collection if you’re not an opener; though with this line you’re really missing out if you’re not opening them up. 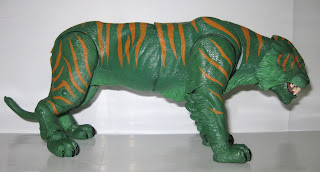 Overall: What a great figure overall. The lower neck joint is a problem and the headgear not attaching more firmly bothers me, but neither affects the aesthetics of the figure too negatively. If you were on the fence about Battle Cat, I’d say you need to get him. Granted, He-Man looks a bit silly on his back but if you put them side-by-side they look pretty great. As a matter of fact, if you have a He-Man and no Battle Cat I’d say your collection just isn’t complete.
4 out of 5 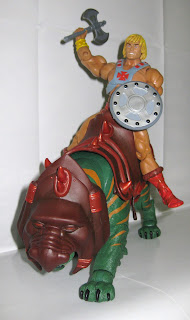 As always, Battle Cat is available on BigBadToyStore (oops - he sold out between when I wrote this and now. Looks like eBay is it, but you should be able to score one for under $40 plus shipping). You’ll pay a premium, but I have no idea if or when Matty will reissue him. 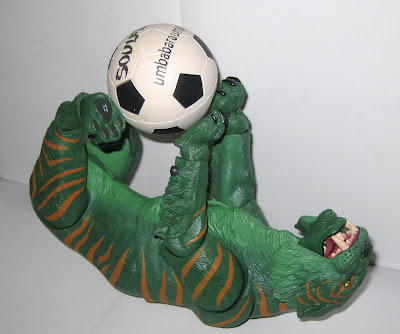