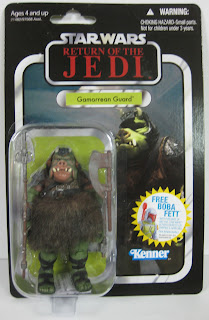 I said earlier that Admiral Ackbar was the figure I had been anticipating the most from this assortment. While that is true, this Gammorrean Guard had ended up being the jewel of the bunch. As far as a fat, slobbering pig-man can be a jewel anyway. 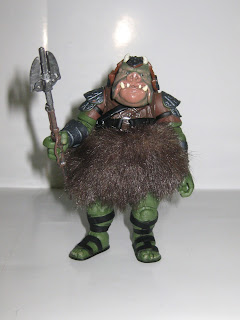 First Glance: This guy is huge. His furry underpants are huge, as well. And yes, I know that since we can see them they are not, in fact, underpants. I don’t care. 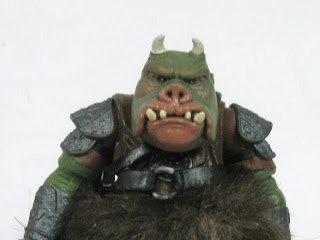 Sculpt: There is not one part of the Gammorrean Guard that I don’t love. From his big, piggy head with the horns on top and the jowls that are sculpted so wonderfully you can almost see them quivering to his big, fat toes sticking out of his sandals. Look at those beady, little eyes. His proportions are excellent, as well. The Gammorrean has all the articulation you could ask for and none of it takes away from the figure’s look. His knees and elbows have joints sculpted around the fat folds to conceal them. 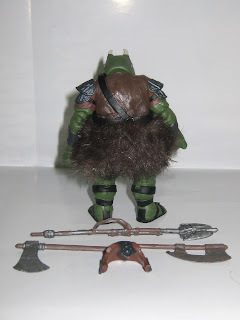 Design: This is one of the best alien paint jobs I have seen from Hasbro. You might just think of Gammorreans as being green, but next time you watch Jedi check them out. They are mottled and have the same pink highlights this figure does. From the tips of his horns to his toes this guy just looks great and real. His armor is all detailed and cleanly decorated – no bleeding into the skin or vice-versa. His furry underpants may look a tad large, but that is simply due to the fur and the scale. And I’d much rather have these than sculpted, painted ones; wouldn’t you? His harness and belt are separate sculpted pieces and fit snugly while boasting a nice amount of detail. The underpants and harness seem like they might be removable, but I’m not messing with them. I can’t imagine why you’d want to take them off, anyway. Also, I bought two of these (so far – I plan to get at least two more) and they have slightly different paint jobs. I don’t know if this is necessarily intentional, but I think it’s great. They are just different enough to feel like two individual guards. 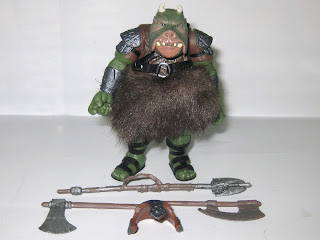 Accessories: With a figure this large, you might think Hasbro would skimp on accessories. Not so fast, junior. Our Gammorrean friend comes with an axe, an two-handed axe, some sort of pike and a removable headpiece. The headpiece is loose but stays on just fine. In what I think is an incredible feat of design genius, this guy can actually hold the two-handed axe with both hands. If you know anything about 3 ¾” figures, you know how impressive that is for one this, uh… broad of girth. 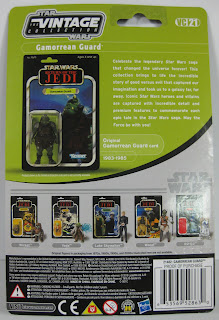 Packaging: It’s the new Vintage Collection blister card and it looks fantastic. It isn’t that the packaging is all fancy or anything – I’ve seen much nicer packaging. It’s that whole nostalgia thing. For a brief moment I didn’t even want to open these. I got over it, though. The Gammorrean looks particularly impressive on this narrow card. 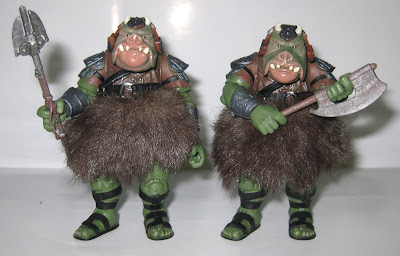 Overall: I don’t want to get all internet hyperbole crazy, but this guy might be the best figure Hasbro has produced. Yeah, I have a soft spot for Gammorreans anyway; but this figure literally could not be any better. Everybody should have one.
5 out of 5
I have this crazy idea now where I want to buy an AT-TE, strip all the doors off, give it some crazy paint job and just fill it with Gammorreans. And a droid pilot. They’d be like the Vikings of whatever planet they inhabited. Everybody would hate them. It’ll never happen – I’d buy a Juggernaut (sorry, Turbo Tank) before I’d pick up another AT-TE - but if I ever come across a junked one, I’m doing it.
My only hope now regarding this figure is that Hasbro releases Piggy, the Gammorrean pilot from Wraith Squadron.

(from Wookiepedia)
Until next time, stay creepy
-Phantom
Posted by Phantom Troublemaker at 1:00:00 PM