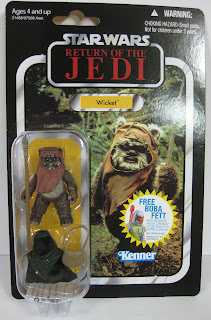 I am a fan of Ewoks.
I get why people don’t like them, I just don’t agree. Ewoks are savage little brutes that were going to eat not only Han Solo and Luke Skywalker, but the mighty Chewbacca as well. And people scoff at the fact that they played such a big role in the Empire’s loss at the Battle of Endor. You know what? That generation of Imperials has been proven to be the most incompetent of any, while the Ewoks were wild savages backed into defending their homes and their way of life from invading aliens. If Randy fucking Quaid can save Earth from the Independence Day aliens, the Ewoks can damn well do the same from a bunch of poorly trained morons who can’t even shoot straight and think the most efficient weapons of war are a giant dog robot that explodes when it gets tripped and a giant robot chicken that is apparently made of the Star Wars galaxy’s equivalent of tin foil.
So Ewoks are pretty damn cool in my opinion. That’s why I bought two of this one. 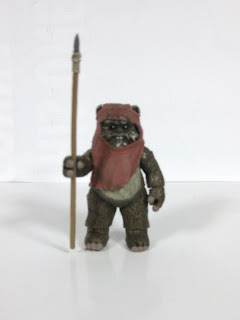 First Glance: The actual reason I bought two is that Hasbro was awesome enough to include Wicket’s movie gear and his cartoon gear. Just looking at the little guy inside the package he appears to be the best Ewok Hasbro has produced thus far. 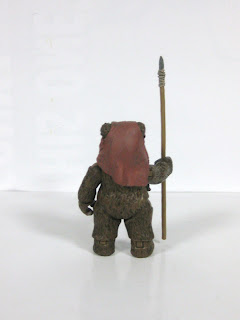 Sculpt: Most of the other Ewok figures we’ve seen seem to have been sculpted to reflect the physiology of an Ewok if they were real creatures. This Wicket appears to have been sculpted to look like Warrick Davis wearing a furry, little suit and I think it is great. His legs don’t quite come together as much as they could have, giving him the slightly awkward stance the character had in Jedi. His arms don’t line up quite well enough to hold his spear with two hands, much like the movie. I would’ve loved it if the figure came with a two-part spear.
Wicket has as much articulation as you need in such a tiny figure, the most important being his analog ball-jointed legs that allow him to sit very much like a teddy bear. The fur on his body has a nice amount of detail, but Wicket’s face is what is truly amazing. The likeness is dead-on and the detail of all of the facial fur is just tremendous. 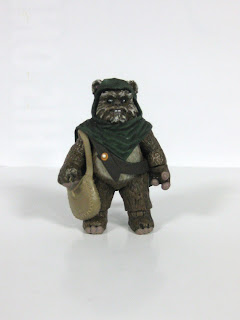 Design: That face is truly wonderful. The eyes are a glossy black and the fur is subtly brushed with paint to look more like millions of individual hairs and less like a sculpt. The rest of the body has the same attention to detail. Wicket’s fingers and toes even sport slightly different colors and stand out so much more than any of the other Ewoks. 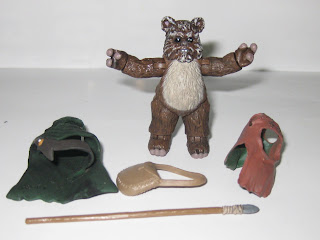 Accessories: Wicket comes with a brown hood like the one in Jedi, a green hood/cloak/belt combo inspired by the Ewoks cartoon, a spear and an over-the-shoulder pouch; by which I mean a purse. I calls ‘em like I sees ‘em. Wicket looks great with the brown hood on and holding the spear, but I prefer the green cloak thing.
The detail on the accessories is great. The stitching is apparent on the brown hood and the belt on the cloak really stands out. The spear has paint on the shaft and the head, while the purse has a detailed fastener.
Just out of curiosity - out of all the garments Ewoks could have chosen to wear, why hoods? And where do they keep their genitals? Is that what the purse is for? 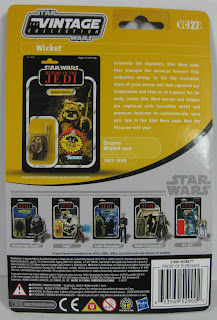 Packaging: It’s the new Vintage Collection blister card and it looks fantastic. It isn’t that the packaging is all fancy or anything – I’ve seen much nicer packaging. It’s that whole nostalgia thing. For a brief moment I didn’t even want to open these. I got over it, though. I think it was great of Hasbro to throw in the extra gear to fill out the blister on this one. 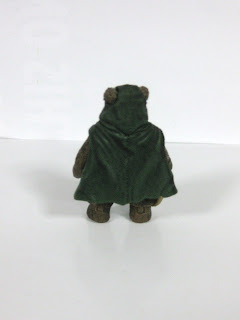 Overall: This is another great figure. If you like Ewoks, buy two of them. If you don’t like Ewoks, buy one anyway just because it is a great example of Hasbro’s Star Wars team creating something great. Regardless of your opinion of the inhabitants of Endor’s forest moon, this is an impressive figure.
5 out of 5
Until next time, stay creepy
-Phantom
Posted by Phantom Troublemaker at 1:00:00 PM