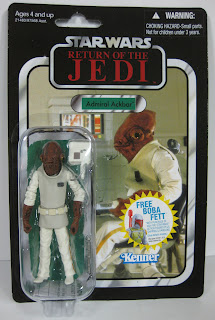 Admiral Ackbar was by far the figure I was most excited about from this wave. He’s always been one of my favorite alien characters, and not just because of the ToyFare attention. Part of his appeal to me comes from how great and important his character ends up being in the Expanded Universe, the other part comes from the fact that he just looks awesome and weird and out there. 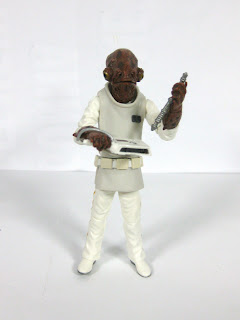 First Glance: I’ve always preferred the old Kenner Ackbar to the ‘roided up Power of the Force version and this new one is definitely reminiscent of that original version. He’s slim and bright red like he should be. 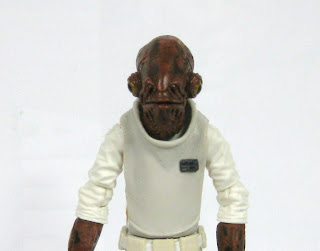 Sculpt: This is the best Mon Calamari head Hasbro has produced. Granted, the only one other than an Ackbar was Ibtisam. She looked really good, but only had comic book likenesses to live up to. This Ackbar goes beyond just looking like his species and really looks like Ackbar. There is just enough personality in the eyes, the mouth and the tendril things around it and just the stature of the figure that Hasbro will not be able to reuse this sculpt. Not even for some of the background Mon Cals. His uniform is straight and the bottom of his shirt – a separate piece – looks like part of the figure as opposed to something that was just stuck on. The Admiral has plenty of articulation, all clever enough so that it doesn’t interfere with his aesthetics. 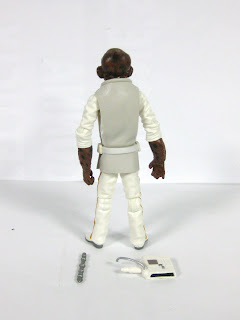 Design: Ackbar’s uniform is a clean white (that hopefully won’t turn yellow) with the yellow stripes down the pant legs. The vest is a nice off-white with some minor details. Where this figure truly stands out is in the paint apps on the skin. He has a bright color mottled with darker spots, and it all looks very natural as opposed to something an artist was doing to try and create texture. Ackbar’s face is just great, with big, expressive eyes and plenty of shading around the mouth and all the little folds. 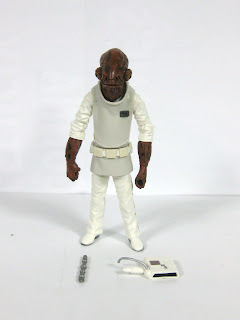 Accessories: This Ackbar figure includes a data pad and a baton that looks like a marital aid. In a bizarre coincidence, this is the second figure I bought this day that came with such a device. The data pad looks good and Ackbar can hold both items. The only accessory that would have been better would have been his command chair, and I think that’s probably a bit much to ask for. 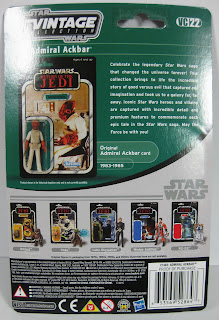 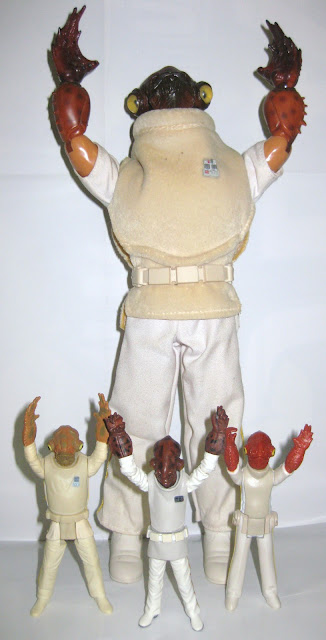 Overall: I can’t imagine Hasbro needing to make another Admiral Ackbar after this one. Granted, they may see fit to release a set with the command chair in the small vehicle/deluxe figure line; but I doubt it. You need one of these to command your Rebel Alliance/New Republic forces, so just go get one. He’s awesome!
5 out of 5 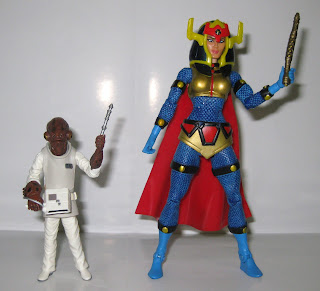 Until next time, stay creepy. Like that picture.
-Phantom
Posted by Phantom Troublemaker at 11:00:00 AM