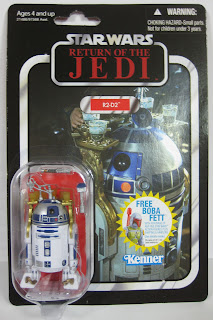 How could anybody possibly get excited about a new R2-D2 figure? We’ve got over eleven billion variations on the world’s most famous astromech, with no end in sight. It’s unlikely we’ll ever get a definitive R2-D2 figure in this scale, because for a little white garbage can he does a whole lot of different stuff over the course of the Star Wars saga.
But this release is one of the better ones. This little R2 unit features a new, more accurate size and shape. It also comes equipped to perform all of the tasks you saw in Return of the Jedi. This is a fairly impressive accomplishment when you consider that in the sixth chapter of the saga R2-D2 was a bartender, a champion saber-tosser, a lockpicker and a co-pilot. 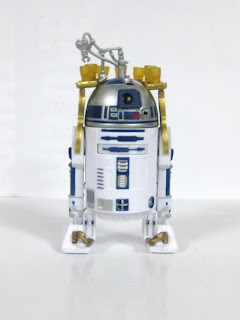 First Glance: I’m not a guy who knows how many squares are in an Imperial rank badge or where the parking brake is on a speeder bike, so I can’t say for certain that this R2-D2 is more accurate than any others. But he seems more accurate when you look at him (I try to stick to neutral gender identifiers when I am talking about robots or droids, but Artoo has been specifically identified as having a male identity), to the point where all of your other astromechs suddenly seem wrong. 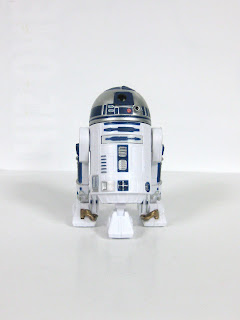 Sculpt: Like I said, this version of Artoo just looks right. Aside from his size and proportions appearing more accurate, he also has almost as many features as those fantastic Clone wars astromechs. His third leg is functional and articulated, his chest panel opens to reveal the little manipulator arm he used to hack the bunker on Endor’s moon, his legs are articulated and one of the panels on his dome extends to resemble his sensor scope; but also pulls out completely so you can place Luke’s lightsaber hilt inside. The cool and not-so-cool thing is that Artoo’s third leg is the activator to launch the lightsaber. While the feature is clever and works fairly well, it means that when you have the panel with the sensor scope on it plugged into the hole the droid’s third leg has to be extended. Since R2-D2 can’t recline when he has the drink tray accessory attached, you end up with a serving droid that has an unnecessary third leg extended or has a hole in his head. It’s a minor issue, but it is kind of wrong.
As far as the droid’s actual sculpt goes, he looks great. All of the panels and circle things and circuitry look great. His dome rotates just like any other Artoo and he reclines in an almost accurate fashion. For some reason the sculpt on his feet hits the sculpt around the bottom of his chassis and he can’t go back as far as he probably should. 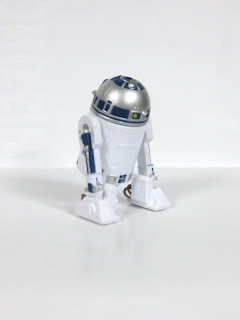 Design: He’s blue and silver and white, just like a good R2-D2 should be. I like the fact that his dome is a painted silver instead of being vac-metallized. That process looks neat, but really isn’t accurate. Even C-3P0 – who is much shinier than any part of R2-D2 – doesn’t ever look right with a vac-metal finish (but he does look more awesome that way). 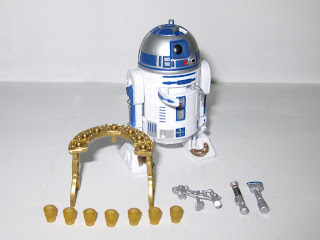 Accessories: Artoo comes with Luke’s Jedi lightsaber, the sensor scope peg and a serving tray with seven removable(!) glasses. I love the way they designed that tray – the glasses can be removed and held by other figures, but stay on the tray thanks to a subtle peg design that does not detract from the aesthetics of the glasses or the tray. 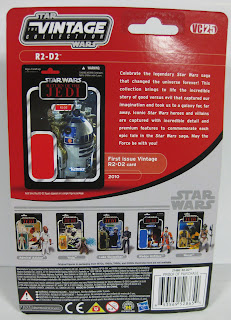 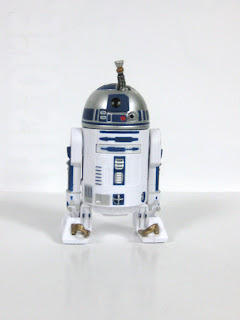 Overall: I’ve always been a big fan of the sensor scope feature on R2-D2 figures. Combining that with the lightsaber shooting feature (which I think has only been done once before, and the figure I’m thinking of was terrible) makes this my favorite R2-D2 ever. And he serves drinks!
4 out of 5
He loses a point because the third leg thing does bother me. I don’t know that I could come up with a better way to do it, but it just isn’t quite right.
Until next time, stay creepy
-Phantom
Posted by Phantom Troublemaker at 1:00:00 PM