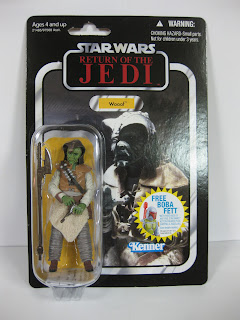 The newest wave of Star Wars Vintage Collection figures is the first in over a year that has offered more than a couple of figures I felt compelled to purchase. The wave is made up of characters from Return of the Jedi and fills in a lot of holes in the modern collection.
Today’s figure is one of those characters that Kenner screwed up the first time around. He was released in the 80’s as “Klaatu”. This is inaccurate in the same way that releasing a Phantom Troublemaker figure and calling it “Human” would be inaccurate. This guy’s species is Klaatu, but his name is Wooof; which is a stupid name, but what are you gonna do?

Fucking Blogger what is your problem with page breaks!?! 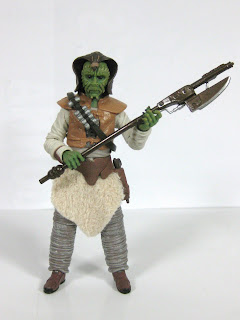 First Glance: I really like Wooof’s pants. Like, to the point where I want some pants like that. They look really comfy. They look kind of like a pug. Okay, now I don’t want them anymore because that is a really upsetting thought. 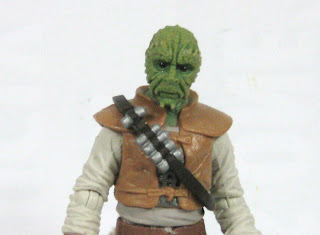 Sculpt: This is easily the most morose face I have seen out of Hasbro. This man obviously hates his job. Considering his job is tossing people to the Sarlacc that lives at the bottom of the Great Pit of Carkoon, I can understand. Beyond the incredibly expressive and well-sculpted face, Wooof has an amazing amount of detail for what at first glance appears to be a somewhat bland figure. Obviously the pants are great, his shirt and boots also have the Hasbro standard of detail and realism. I love that his vest and bandolier are separate rather than sculpted on. It gives the figure so much more texture and depth – one of those things that helps make these look like little replicas rather than toys.
But Wooof is a fine toy, as well. He has a great amount of articulation, can hold his weapons and his blaster fits in the holster. 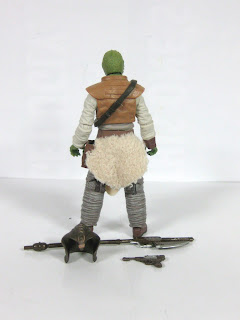 Design: Wooof has about as much detail as he needs. He’s not exactly one of the standout creatures from Jabba’s crack security staff. As a matter of fact, this is Hasbro’s first update of him. As recently as three years ago they were still releasing the crappy, five points of articulation version with minimal paint detail. Compared to that one, this one is a fucking miracle. His face is painted just as intricately as it is sculpted, with glossy eyes and wonderfully detailed warts and scales and whatnot. His clothing looks dusty and old. In another amazing use of soft goods (which I am rapidly changing my mind about, at least until I get another Jedi with a crappy robe), Wooof’s loin cloth looks great and is made of some sort of material that has a nice texture and hangs well at this small scale. 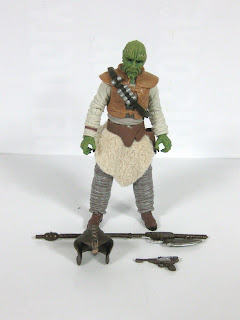 Accessories: Woof comes with a blaster pistol that can be holstered and a force pike. Both look accurate, with the pike looking especially nice and used. His head covering is removable and looks great, but doesn’t stay on so well. 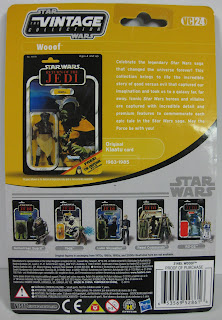 Packaging: It’s the new Vintage Collection blister card and it looks fantastic. It isn’t that the packaging is all fancy or anything – I’ve seen much nicer packaging. It’s that whole nostalgia thing. For a brief moment I didn’t even want to open these. I got over it, though. It’s interesting to note that on the back of the package Hasbro acknowledges Kenner’s mistake by showing the old “Klaatu” card. I love seeing those little differences between then and now. 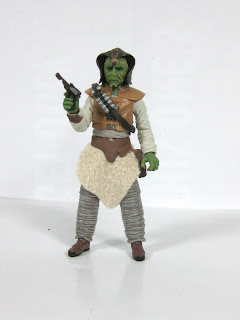 Overall: I really dig Wooof. If I felt he could be altered enough I would probably buy another one, but he’s actually too well-done and distinctive to serve as two different characters. That’s okay, I managed to make the last Klaatoonian Hasbro released twice as useful. I’m okay with getting less mileage out of this one.
4 out of 5
Until next time, stay creepy
-Phantom
Posted by Phantom Troublemaker at 11:00:00 AM