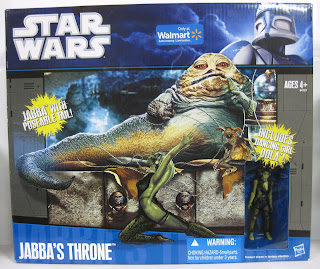 I honestly thought that the search for this set was going to drive me nuts. It’s a Walmart exclusive and that means one of three things:
1) Every Walmart on the planet will get absolutely deluged with the things. They will get marked down again and again and you will be able to buy one for around twelve cents before all is said and done. Of course, your dumb ass bought it the first time you saw it and therefore paid 75% more than everybody else.
2) We in Georgia will hear for months about how whichever exclusive item it may be is showing up all over the country. It will be plentiful but expensive on eBay. After months of watching the Walmarts in your area (I have five in my normal driving circuit) you will finally give in and buy one off of eBay for almost twice the retail price. Naturally, the next day option 1 will happen.
3) You will never, ever see the item at a retail location near you.
As a toy collector, I live in perpetual fear of numbers 2 and 3. Apparently these Jabba sets started showing up in the rest of the country in June. Georgia didn’t see any then. By the end of August, toy reports and reviews were referring to the Jabba’s Throne set as a thing of the past, a summer release whose time had come and gone. Georgia still hadn’t seen any. It is now November, and Jabba is old news and the Target exclusives (which are plentiful and I’m going to wait for the inevitable markdown or sale because it won’t break my heart if I don’t get them) are the hot shit. I have still never seen one in Georgia.
Luckily for me, the Troublemaker’s went to Walt Disney World in Orlando for Lil’ Troublemaker’s 3rd birthday and a Walmart down there had like, fifteen of them.
So now I can review it for you lucky folks. 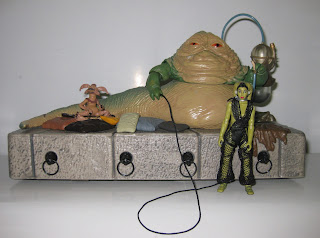 First Glance: It’s the standard packaging that all the new toys have. There’s a little window to show off Oola. The blurb above it reads “Dancing Girl Oola Included” and it was pointed out to me that if the figure did not dance that was false advertising. Fair point. Once Jabba was out of the box, it struck me how bland he really is. Oola looks maybe a tad more complicated than she needs to be. I’m still very excited about the set, though. 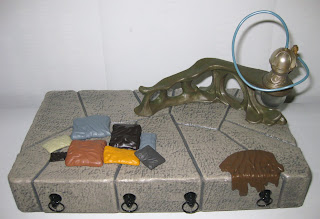 Sculpt: The throne looks tons better than the old Kenner version. It’s larger, has more detail and the little gargoyle heads look great. While it doesn’t have the trap doors of the original (that didn’t make sense anyway), it does feature wheels on the bottom so you can slide the Hutt gangster back and forth. 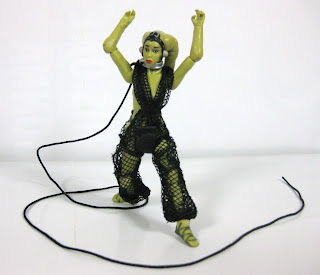 Oola looks great. She has all of the articulation of the current standard Star Wars figures. The head is a marked improvement over the old mail-away version that came with Salacious Crumb. And this might actually be the very first (humanoid) figure from Hasbro to be sculpted completely nude. Kind of ironic that it’s a Walmart exclusive. And no, there are no lady parts you perverts. 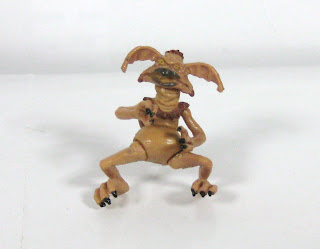 Speaking of Salacious Crumb, the Kowakian Monkey-Lizard is also included in the set. It’s the same sculpt as the one that came with the C-3P0 from a couple of years ago and maybe not entirely appropriate for this set. I would rather have a fully seated one. He looks good and accurate, though; so I’m happy enough. 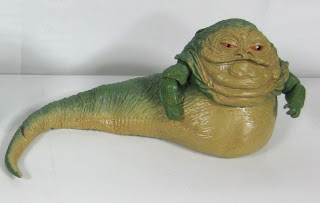 Jabba is a plastic head and arms on an armature covered with a rubbery skin. He sports both the tattoo on his right forearm and the scar on his tail. His arms are about as poseable as a 10,000 pound intestinal parasite’s need to be. He can hold the hookah pipe that he comes with, so that’s good. His tail is on some kind of articulated piece that I can’t quite figure out the mechanics of, but it can be posed pretty much any way Jabba might be situated. Much like the recently reviewed Abigail Whistler, I’m a little concerned about the shelf life of Jabba’s rubbery skin. I guess we’ll see. Jabba’s head sculpt is accurate, but his mouth is kind of odd. I think this is more due to the paint than the sculpt, though, so I’ll address it in a minute.

Design: I can’t help but think that Jabba doesn’t look totally awesome. I mean, he looks accurate, but maybe this is one of those rare cases where a little embellishment over the movie would have been okay. He does look a whole lot better than the Jabba he’s replacing – the one with the slime (or Jabba Glob, as you giant nerds will no doubt know). His mouth is my main problem. I think a little paint inside could have really improved things. I might have to do something about that. Also, the paint Hasbro used on Jabba’s body and tail is a bit adhesive. He kept sticking to the white paper on my little photo shelf. Be careful where you put him, because the tan parts will probably pick up print like Silly Putty. Just keep his fat ass on that throne.
Crumb has a fantastic paint job. He actually looks a little better than the last release to use this sculpt.
Oola has a very subtle and well done paint job. Her skin is several shades of green rather than just the base color. Her face looks great and Hasbro did a great job with the makeup, something you can’t always say. She’s wearing a fishnet catsuit thingy just like in the movie with some kind of leather diaper over it. The diaper looks kind of stupid and I’m thinking about taking it off. Oola also has her slave collar and what would work out to be about forty feet of rope scale-wise attached to it.
The throne has minimal detailing as far as paint goes, but what is there is good and is really all that is needed. Just a few touches here and there make it look so much better than the Kenner version.

Accessories: You get the hookah, the pipe, the thing that the hookah sits in, a bunch of multi-colored pillows and what basically amounts to a Hutt mung rag that sort of hangs off the front of the throne. The hookah-related gear all looks nice, but I’m bummed we didn’t get Jabba’s snack bowl. The pillows and the rag are well sculpted but could maybe use a little more paint detail to look less generic. They just don’t quite fit in with the rest of the throne as nicely as they should. 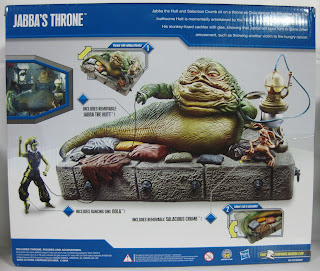 Overall: I’m glad I finally found this set, and it does look great on the shelf. That being said, I’m almost a little disappointed. I can’t point to anything specific that is overwhelmingly bad, maybe it’s just that after spending so much time looking for this one the reality couldn’t live up to the expectations. The set is really good, but I think it could be better. Especially for $38.88. Hasbro really needs to get a grip on their exclusive prices. The new Hoth sets at Target are almost underpriced at $39.99 apiece, while this Jabba probably would have felt more reasonable for $25 - $30. And I still can’t believe I paid $110 for the new Slave I. Especially since it’s currently on sale for $79.99; so go get one now if you want it. That set is absolutely worth that price. Jabba and his throne, on the other hand, get
3 out of 5
Until next time, stay creepy
-Phantom
Posted by Phantom Troublemaker at 1:00:00 PM