Toy Review – Masters of the Universe Classics: Grizzlor By Mattel 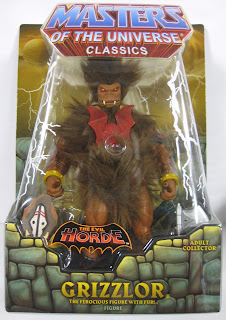 The last couple of weeks have been crazy action figure-wise. Everybody is unloading their hot, new Christmas stuff. Also, not only did I get two figures from completely different lines that both came with what basically look like science-fiction dildos; I also got two figures whose appearances are greatly enhanced by fur.
Friday’s Gammorrean Guard was the first; today’s Grizzlor from the accursed Mattycollector.com is the second.
Lord knows I’m getting tired of doing Matty rants every time I get a new figure from those incompetent boobs, and chances are I’m working on another one as you read this. You see, Matty is putting a ton of older merchandise up on their site today in very limited quantities. They are also offering Battle Cat again, so I’m planning on ordering him and the Adam Strange/Starfire 2-pack. Since I spent a record seventy-five minutes ordering Grizzlor, I don’t expect this to go well. This is the one that I’m going to be trying to do from work on my phone. The Roboto sale went fine from the phone, but for Grizzlor I was trying on my phone and on my PC and the PC got through faster. I’m sure I’ll have a magnificent new rant for you tomorrow.
It wouldn’t be too far-fetched to say I ordered Grizzlor as sort of a joke. The character has no special attachment for me (like, say, fellow Horde member Leech; who I hope they get to in 2011), but he’s all furry. Like Sean Connery. The production photos on Matty were hilarious so I had to have him. I can enjoy ridiculous toys just as much as straight-up awesome ones. But once I opened Grizzlor up, I realized he actually leaned more towards the awesome side.
In other Masters of the Universe news, Matty has changed the January figure form Bow to Vikor. This is important to me since I got the subscription for next year. Now I can start the year with a figure I actually wanted instead of one that is 85% likely to be instant eBay fodder. It depends on how great that mustache looks. 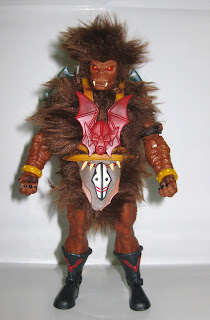 First Glance: Grizzlor’s fur looks a little wacky in the package. Maybe he should have come with a little brush. Still, I could immediately tell he was cooler than I expected. His head looks kind of familiar… 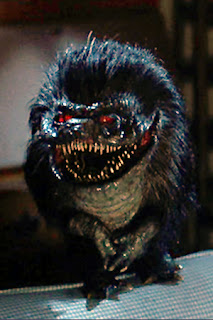 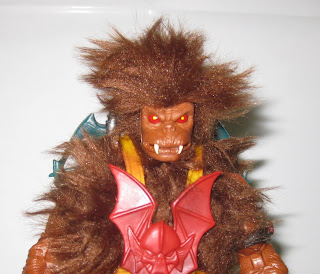 Sculpt: And once I opened him up, I got it. Grizzlor’s head looks like a Crite. You know - from Critters. And that makes me like him about twice as much before I’ve even taken in the rest of the figure, which I believe sports new arms, hands, legs and feet. His torso is covered with fur, but I’m sure it’s a standard He-Man buck. His arms and legs have hair sculpted on that looks surprisingly acceptable next to his actual torso and head hair.
I have been reading about people having problems with joints that are either too loose or too tight on various MOTU Classics releases (and DC Universe, for that matter). This is the first one I’ve gotten that has had any kind of problem. Grizzlor’s arms are a bit loose, but his left knee is the real problem. It is just plain floppy. As in, if you shake Grizzlor all about his leg does the Hokey-Pokey from the knee down. It’s really bad. Being a thirty-plus year veteran of action figure posing I can work around it, but I can hardly feel like it’s acceptable. I suppose I could return the figure, but I have enough hassle in my life right now without trying to get something from the worst-run site on the internet. I’ll just deal with it.
Note: I just came back to this after writing about Grizzlor’s giant Horde crossbow. It made me remember that not only can Hordak barely hold his, but that his joints were a bit loose too. Not anywhere near as bad as Grizzlor’s knee, but still fairly loose. What have you got against the Horde, Mattel? 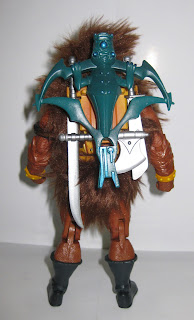 Design: Obviously we need to start with the fur. It’s great. There’s pretty much no way to avoid the fact that you’re going to have to basically style Grizzlor’s hair once you get him out of the package, and I was only half-joking that he should have come with a little brush. But with some effort you can fluff him (shut up) to the point where he looks okay. The fur has a great texture and is just thick enough for this scale of figure to look good and… Huh. Normally I would say “hang right”, but I guess “stand up right” is more accurate in this case.
His face looks just awesome. Not even considering its resemblance to the classic 80’s movie creature, the paint is nice and subtle like most of the Masters Classics. This line is so good at producing paint jobs that appear simple from far away but very detailed up close.
His wrist bands look good and I think they’re new, though Grizzlor might share those and his forearms with Beast Man (I don’t have Beast Man – after the amazing 200x sculpt I find I can’t go back to the Classic style). His shin armor is different from Hordak’s, which surprised me a bit. While his harness is removable, I’m going to consider it a part of his design rather than an accessory because I don’t think it would be a great idea to take it off. The front has the Evil Horde sigil and looks great, but the back is where things really get awesome. You see, something you don’t realize until you get Grizzlor out of the package is that he has a ton of weapons. And they can all be stored on the back of his harness. These are the kinds of details that keep me coming back to spend absurd amounts of time buying Matty’s figures. 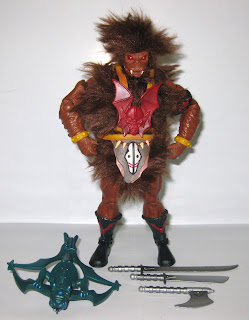 Accessories: Grizzlor comes with a lot more stuff than I originally thought. He has a sword, a shorter machete-style blade, a short axe (when do you use “ax” and when do you use “axe”? I’ve come across this dilemma a few times in the last month or so), a Horde crossbow and a loin cloth. 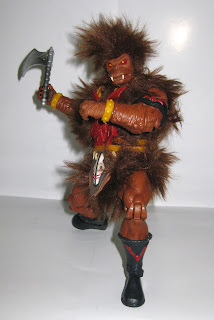 I believe he was originally going to include an alternate head, but I don’t miss it.
The weapons all have the same impressive type of paint deco as the head. From a distance they appear to have simple, one-color paint jobs. Once you get up close, though, there is detailing on the grips of all the weapons and the grip, body and head of the crossbow. As an added bonus, he holds all of his weapons very well. Even the ridiculously oversized and unwieldy crossbow. 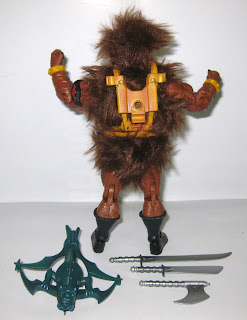 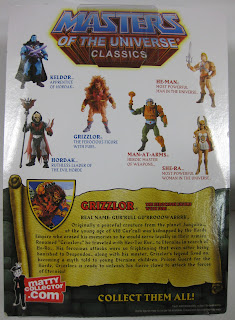 Packaging: Speaking of packages, Grizzlor comes in the standard Masters of the Universe Classics packaging. It looks nice, makes the figures look even bigger than they are and in Grizzlor’s case conceals just how much stuff he comes with. You also get a bio on the back that is sort of a composite of each character’s history. 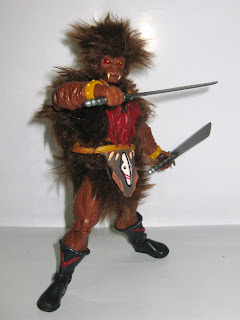 Overall: I’m surprised by how much I’ve ended up liking Grizzlor. Critters head aside, he looks pretty badass wielding wither the set of blades or the ax. That little thing just looks brutal. The quality of the design of the figure is sadly brought down by the lack of quality in the production. If Grizzlor was produced and assembled as he was intended he’d be an easy 5 out of 5. As it is, that trick knee drops him down to
4 out of 5 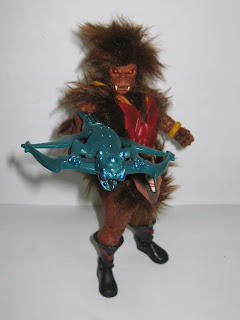 Some of you may think that’s too generous for what is essentially a defective figure, but he does stand up and I was able to get several poses out of him. It’s not optimal, but it’s okay for my needs. This figure has gotten me even more excited to see what the Four Horsemen can do with my Horde favorite, Leech. I don’t need him to spit, but he better damn well have suction cup hands. Preferably interchangeable ones.
Until next time, stay creepy
-Phantom
Posted by Phantom Troublemaker at 1:00:00 PM