Go ahead and just skip this opening part if you read my review of Black Widow and Winter Soldier. I just recycled since they’re from the same series and I don’t have any other generic comments to open with except to say that I do not understand the Marvel Select figure line.
Okay, don’t skip just yet. Marvel Select recently put out a Deadpool figure that doesn’t look very good. Actually, they just put out two Deadpool figures that don’t look very good – a seven-inch scale (who the fuck does seven-inch scale? That’s as stupid as DC’s thirteen-inch scale…) and a 1/6th scale. I don’t like either of them because Marvel Select clearly has very little skill at designing fun action figures. They are very good at designing large characters, though. I was tempted to buy the Hulk and Ben Grimm figures they put out and did buy a Watcher. I guess they’re good at zombies too, because those Marvel Zombies figures are great. I guess Select should avoid the standard heroes and villains. Just leave it to Hasbro, guys…
You can skip to First Glance now. 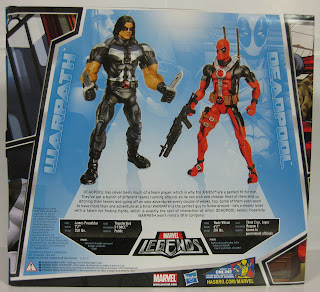 I love it when I lose track of when toys are supposed to be coming out. Sometimes the internet is a pain in the ass, what with letting us know when toys are hitting the rest of the country so we can waste countless hours dropping in on our favorite (and not-so-favorite) toy retailers to check the shelves.
The last time I heard anything about the newest series of Marvel Legends 2-packs was back in February after Toy Fair. I’m not sure I even remember them being mentioned at SDCC. Then I get a message from Evil the other day letting me know that he’d gotten them and that Valkyrie didn’t look so great. I had no idea they were coming out, but managed to get them on my very next trip to Toys R Us.
The series consists of three 2-packs: Valkyrie & Hulk, Black Widow & Winter Soldier and Deadpool & Warpath. I skipped Valkyrie & Hulk because Evil was right and because I don’t need another Hulk. The other two were worth picking up because Widow and Bucky look good, Deadpool looks great (far better than the stiff and too-large Marvel Select offering) and Warpath has always been a favorite of mine. Warpath + gigantic knives just sweetens the deal.
Thirty bucks is too much for these. And yet, technically it is a bargain. DCUC figures are fifteen bucks apiece right now and share A LOT of parts. Marvel Legends are all brand-new sculpts (at least, these six figures are), but cost the same as Mattel’s DC figures. I know I should feel good about that, but thirty bucks for two figures just seems steep. I balked at the $24.99 price tag on the last series. Oh, well. 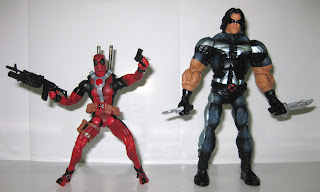 First Glance: I think Hasbro missed the opportunity to make a crappy character here. I mean, they could have put a SuperPro figure in with Deadpool and it still would have sold. I’m glad it’s Warpath, though. I always liked him and the fact that he’s in his X-Force uniform with a couple of giant knives is just awesome. 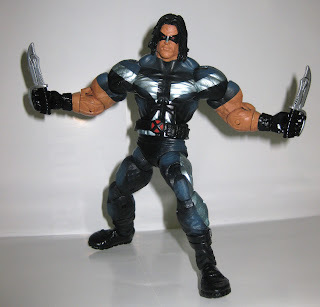 Sculpt: Warpath kind of reminds me of ToyBiz’s Bishop figure, and that’s just about the worst thing you could say about an action figure that isn’t “It reminds me of ToyBiz’s Scarlet Witch.” I don’t know how or why this effect is accomplished, but just like Bishop Warpath appears to have been sculpted out of clay by a ten-year-old. It would be one thing if these two came from some kind of Mark Texiera tribute line or something, but when you put them on a shelf with the rest of your smooth Marvel Legends that look like non-golem representations of human beings they just look like shit. I don’t get it. His articulation is even weird. Why the fuck did they put swivels halfway up his forearms? They clearly weren’t interested in preserving any kind of aesthetics, because when you do swivel the joints the sides don’t line up and the fucking black plastic underneath the paint shows. He also doesn’t hold his knives very well. This thing looks like a big piece of shit with arms and legs. I’m putting him in a dark corner of shame. 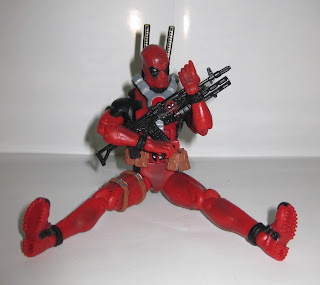 Deadpool, on the other hand, is great. His face/mask looks very good and he has the little hangy part on his hood rather than a smooth balaclava-type thing. His gloves and shoes are detailed extremely well. Deadpool’s articulation is great. Hasbro incorporated double joints into his shoulders so that he can pull off all kinds of crazy shooting poses. 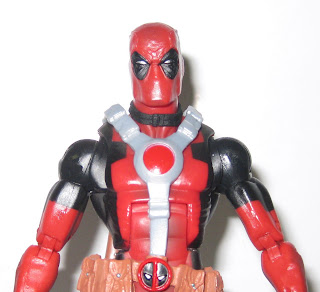 Design: Deadpool is painted up just right. From his eyes to the little clasp things on his gloves to his shoes, Hasbro caught every detail of Mr. Wilson’s person. 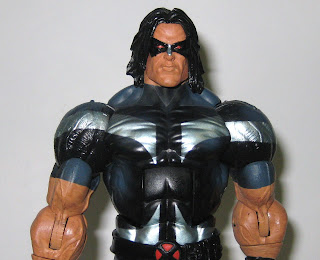 Warpath looks like a well-painted turd man. I can’t imagine being the guy who put together the paint apps for this one. He did the best he could. Warpath has all kinds of nice little touches and I really like the metallic blue. 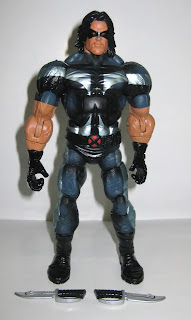 Accessories: Warpath includes two giant knives, which fit into a sheath on the back of his belt. The knives look great, but it doesn’t matter because Warpath sucks. 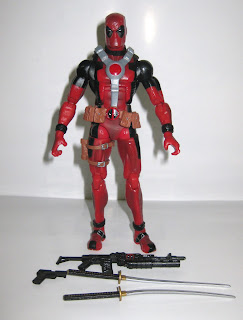 Deadpool includes a pistol, two katana, a belt/harness thing, a holster and a rifle. The pistol fits nicely into the holster and the katana slide into sheathes on the back of the harness. Unfortunately, the blades are made of the same shitty plastic NECA uses to make feet, so they will be forever warped and stupid looking. Deadpool’s rifle has a tiny little Deadpool painted on it and I think that is one of the neatest touches I have seen on a toy since Hasbro’s secret message inside the AT-AT. The belt/harness is a little too big, but it was done so as not to interfere with the figure’s poseability. I can appreciate that. That and the holster just wouldn’t have looked nearly as good sculpted on. 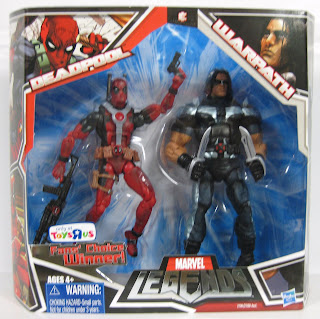 Packaging: Good lord. That is one blurry picture. Sorry about that - don't know what happened there. The packaging is the same as the last series – a window box that is surprisingly logical and easy to open by today’s toy packaging standards. I like it. 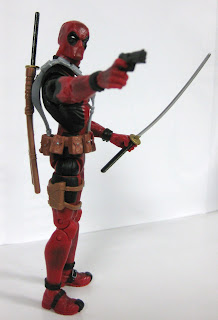 Overall: I didn’t realize how disappointed I was by that Warpath until I started writing this review. I need to go home and look at him again just to make sure he’s as bad as I think he is (I think he is). Deadpool, is great, though, and is probably the reason most people are buying this set anyways. Like I said, they could have thrown anybody in with that guy and people would have bought it.Oh, but Deadpool should have come with an alternate, unmasked head. I mean, c'mon Hasbro.
3 out of 5
Deadpool’s awesomeness offset Warpath’s suckitude just enough to keep this set from failing. It’s not like Warpath is total drawer-fodder, after all. I mean, I’ve had that fucking eyesore Bishop on the shelf for what, like eight years now? 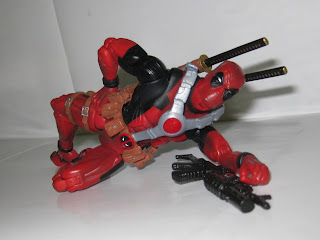 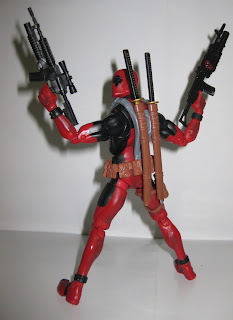