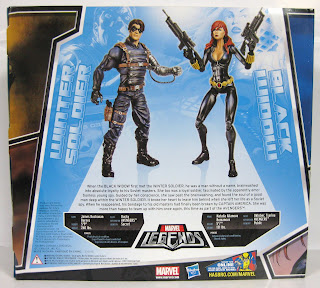 I love it when I lose track of when toys are supposed to be coming out. Sometimes the internet is a pain in the ass, what with letting us know when toys are hitting the rest of the country so we can waste countless hours dropping in on our favorite (and not-so-favorite) toy retailers to check the shelves.
The last time I heard anything about the newest series of Marvel Legends 2-packs was back in February after Toy Fair. I’m not sure I even remember them being mentioned at SDCC. Then I get a message from Evil the other day letting me know that he’d gotten them and that Valkyrie didn’t look so great. I had no idea they were coming out, but managed to get them on my very next trip to Toys R Us.
The series consists of three 2-packs: Valkyrie & Hulk, Black Widow & Winter Soldier and Deadpool & Warpath. I skipped Valkyrie & Hulk because Evil was right and because I don’t need another Hulk. The other two were worth picking up because Widow and Bucky look good, Deadpool looks great (far better than the stiff and too-large Marvel Select offering) and Warpath has always been a favorite of mine. Warpath + gigantic knives just sweetens the deal.
Thirty bucks is too much for these. And yet, technically it is a bargain. DCUC figures are fifteen bucks apiece right now and share A LOT of parts. Marvel Legends are all brand-new sculpts (at least, these six figures are), but cost the same as Mattel’s DC figures. I know I should feel good about that, but thirty bucks for two figures just seems steep. I balked at the $24.99 price tag on the last series. Oh, well.
Today we’re going to talk about Black Widow and Winter Soldier. I’ve always dug Black Widow’s whole hot redhead superspy thing, but I’ll admit that I’m not totally up on Winter Soldier’s story. I mean, I know his story – Bucky got brainwashed then turned into Cap – but I don’t think I’ve ever read a single comic that had Winter Soldier in it. I’ve always stuck to the mutant side of things with Marvel (I think I just lied – I’m pretty sure Winter Soldier was in an issue of Wolverine I read). But Winter Soldier has a cool look and comes with a figure I wasn’t going to pass up. 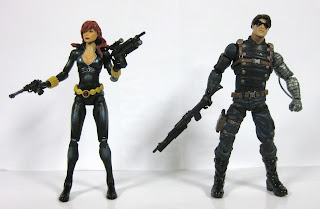 First Glance: Same old packaging, which is fine. Both figures look good to the point where I didn’t even hesitate to buy them. I’m stoked about the fact that each figure has an alternate head. 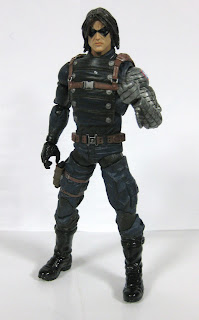 Sculpt: Winter Soldier is a big dude. I love Mattel’s DCUC figures, but these toys make me remember just how bland that line really is. There is just so much detail on this guy. His face is craggy and has all kinds of character. He’s like, emoting or something. The cybernetic left arm looks very good. The cable going from triceps to forearm is a pretty solid achievement, as it does not interfere with movement at all and looks good at the same time. Winter Soldier’s wrist articulation is a bit iffy, as both look a little funny, but I’d rather have the movement than a totally perfect sculpt. His abdomen is particularly clever, as the front panel of his shirt is a separate piece that is connected to the straps going around his torso. This is cool because it gives the figure a more solid look, eliminating the functional but awkward-looking abdominal joint that most figures have nowadays. Don’t get me wrong – I love that joint. It’s just nice that Hasbro worked around it on this figure. All of the folds and seams on Winter Soldier’s clothing look nice and consistent and his articulation is plentiful without making him look weird. Both heads look great, but I prefer the one with long hair. He can hold his firearms just fine, but only in his right hand. His cybernetic hand, much like love, is a fist. 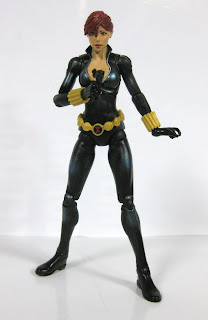 Black Widow seemed kind of plain at first, but I realized as I was doing the photos that this is actually a very stylized figure. She has very clever articulation that is effective without screwing up aesthetic quality – something that seems extremely hard to do with female figures. Widow’s balancing is fairly amazing – just to look at her you’d think she might be a difficult one to pose in anything other than just a standing position, but her feet are just big enough to allow for a lot of variety. I like the fact that her belt and wristbands are separate pieces. Her bodysuit is fairly straightforward, but the details that are there are nice – that zipper just looks great. She can hold both of her guns, which is good. I initially thought I was going to display her with the long-haired head sculpt, but once I put the short-haired one on I liked it better. They both look great, though. 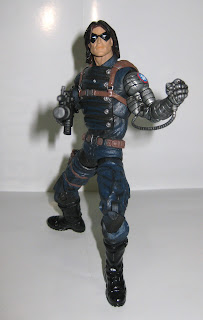 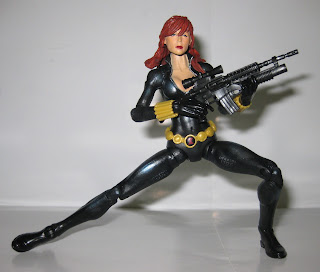 Design: When Hasbro is trying, they do paint apps better than anybody. I feel like these two figures are a prime example of that. 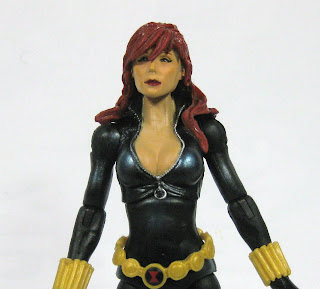 Widow has subtle blue highlights that keep her bodysuit from being bland. She also has a shiny black deco on her gloves and boots that looks really nice. Her face(s) looks nice as well. 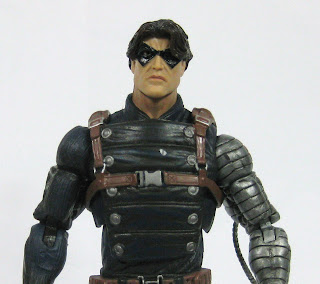 Winter Soldier seems pretty basic at first, but there are actually a pretty fair number of paint applications on the guy. There is a lot of subtle detailing on his clothing, he has nice shiny boots and his cybernetic arm looks great. 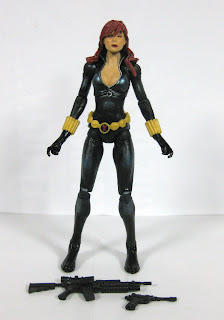 Accessories: Widow comes with a pistol and a rifle. Normally I would like a figure to have a holster for a pistol, but that would have messed up her aesthetics. They could have put a strap on the rifle, though. 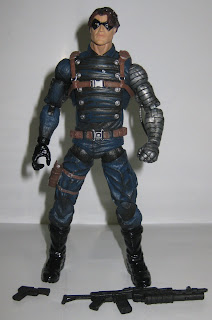 Winter Soldier has a pistol that fits nicely in his thigh holster and a rifle. Again, the rifle could have used a strap.
Both figures have alternate heads that look great. Oddly enough, I prefer the long hair for the dude and the short hair for the chick. 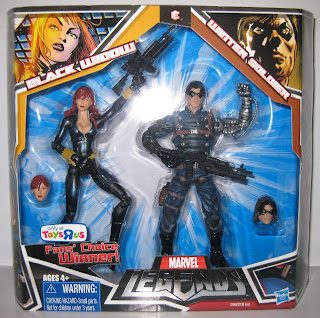 Packaging: Same as the last series – a window box that is surprisingly logical and easy to open by today’s toy packaging standards. I like it. 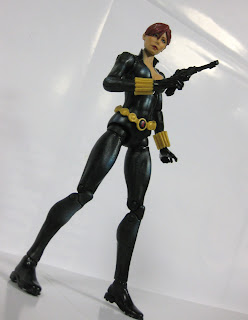 Overall: This is a great set. If you still collect the larger-scale Marvel figures, I’d say this one is a must. I am particularly impressed by this Black Widow. She is definitely one of th best female figures I’ve seen in this scale.
5 out of 5
Any set of figures that consists of characters that I’m not a huge fan of that impresses me this much gets a perfect score. Aside from putting straps on those rifles, there is not a single thing I would do to improve either one of these. Go buy ‘em now!
Until next time, stay creepy
-Phantom
Posted by Phantom Troublemaker at 11:00:00 AM