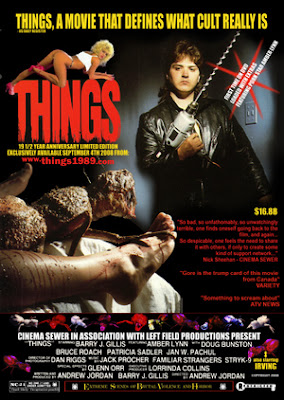 I cannot believe I actually have this movie on DVD. This is very exciting for me, because it means I can start my crusade to stain people’s minds with this awesomely wretched cinematic turd all over again; and with special features. I liken my need to share THINGS with people to taking a bite of something awful, saying “Oh, lord; this is terrible,” and offering it to the person sitting across from you. You want to share that singular experience of awfulness and watch the corresponding reaction to see if yours is justified. Only, in the case of THINGS, there won’t be ANYBODY who says, “oh, it isn’t that bad.”

THINGS on DVD is more satisfying than I could have possibly imagined. I would never have dreamed that anything could have made the THINGS experience more bizarre and surreal than the movie on its own. As a matter of fact, I was a little nervous that extra material might lessen the overall impact of the movie; giving us insight into the minds of the regular, everyday guys who just did the best they could to tell a horror story. Not so. At all. Tim and Eric could never even come close to being as strange and off-putting as the THINGS crew, not on their most inspired day.

The movie itself is virtually unchanged. Zero effort was put into making the film look good for DVD. It is indistinguishable from the VHS transfer and I am profoundly grateful for that. I would never, ever want a pristine, crystal-clear copy of THINGS.

The commentary track is fairly painful to endure. It consists of Barry J. – front-and-center, as is his habit – along with Andrew Jordan, a couple of other cast members and a young girl who has a foul mouth and verbally abuses everybody for making such an awful fucking movie. Thanks to a little research by Gnoll, we discovered that this delightful young lass is none other than Barry J.’s daughter.

The deleted scenes are fantastic and I literally cannot figure out why they were cut from the movie. There is a magnificent exterior shot of Doctor Lucas’ castle that really would have tied the fucking room together.

The local news segments with a twenty-three year-old Barry J. are hilarious. The stated budget for the film fluctuates between forty thousand and three-hundred-fifty thousand dollars; sometimes within the same interview. Barry J. also makes more than one comparison of himself with David Cronenberg. Despite starring in a $350,000 film, Barry J. never really seems all that comfortable in front of a camera.
The reunion footage is the real crown jewel of this DVD, though. We reveled in every single awkward minute of it. The reunion is held in what appears to be a classroom of some sort and is inexplicably hosted by three individuals: Barry J.’s charming daughter, an old hippie ventriloquist and a ventriloquist dummy that is twice as terrifying as ventriloquist dummies already are. Through some marvel of incompetence, the dummy’s sound level is about three times that of anybody else’s – including the ventriloquist(!), so you have to turn the volume way up to hear anybody speak. This means when the dummy talks (but not the ventriloquist!) it hurts your ears ever-so-slightly. I cannot begin to describe how awkward this entire segment is. From Barry J.’s shifty behavior to Andrew Jordan’s outright fucking weirdness to the guy that played Doug calling the aforementioned daughter a whore; it is all deliciously horrible.

It was during the reunion that Gnoll pointed out that Barry J. has my address and could very well show up on my doorstep one day. The thought does not bear contemplation. If I had seen this DVD previous to TB finding the website and the Facebook group I NEVER would have initiated any sort of contact with this nut. I probably would have had the DVD shipped to a P.O. box. I don’t know what Canadian trailer park these people got washed out of, but I never want to end up there. And yet, if I had the one million dollars Barry J. claims to need to produce the follow-up to THINGS, I would fork it over in a second.

The rest of the special features are all spectacular madness. I’m not going to detail every one of them here, just know that not a single one disappoints.

Overall, the THINGS DVD is more than I ever could have dreamed of. I would have been happy enough just to have a bare-bones replacement for my dying VHS, but this edition just enhances the whole THINGS experience in a way I would never have thought possible. It’s kind of sad, in a way. My search is done. I will never find anything else as singularly horrible and wonderful as this DVD. I’ve heard tell of circles of celebrities who trade tapes of the bizarre and the horrible – ranging from the torture of animals to instructional videos showing mentally retarded adolescent females how to use feminine hygiene products, but those are just objects of horror and discomfort. There is no real magic there. No love of creation was involved in those items. THINGS is an outpouring of undirected, undisciplined creative stew, like Technicolor diarrhea. There is no doubt that equal parts passion and lunacy went into this movie. Ed Wood was far too skilled to ever make THINGS. Lloyd Kaufman too refined. THINGS was created by a very special set of circumstances and people from the bowels of the Great White North and it’s like will never be seen again.

Go to the website. Buy this movie now and share it with as many people as you can. You’ll find out pretty quick who your real friends are.
Bizarro 5 out of 5
And recipient of
The Official Phantom Troublemaker Worst Fucking Movie of All Time Award


Until next time, stay creepy
-Phantom