Dammit! I could have done this one yesterday when it would have been more appropriate.
I had no intention whatsoever of buying this figure until I pulled him off the peg at Toys R Us. I like the remake, I just didn’t see the need for another Jason figure. I’ve got plenty (although if I can find a Jason X I’ll get it).
But as I was standing there looking at the “Totally Inappropriate for Kids” section in the World’s Greatest Toy Store, inspiration struck for an article. More appropriately, for a portion of an article that I’m already working on. This incarnation of Voorhees looked pretty cool and was reasonably priced for today’s expensive toy market, so I bought him. 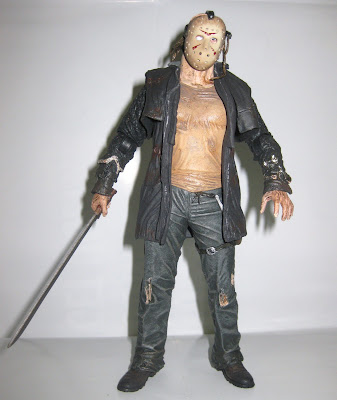 First Glance: He’s pretty huge. Like, I think he’s going to dwarf the McFarlane one. As much as I love articulation, I’m not too sure I like how his elbows look. 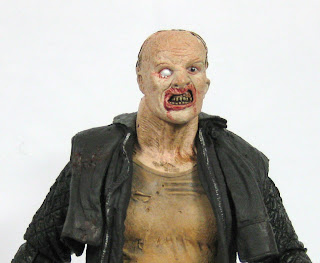 Sculpt: Like all of NECA’s toys, Jason looks very good. All of the fabric textures look great. The sack head is super-creepy and features an actual separate piece for the sack – not that you can remove it, but it just looks better than if it was all a single sculpted piece. The mask head looks nice as well, but I don’t like the fact that the hanging hair is part of the mask, not the head. This becomes a bigger problem for me because the particular figure that I got has a broken strap on his mask, so it sort of hangs off to the side, taking the hair with it – it looks stupid.
Jason’s face under the mask is gross and movie-accurate. Aside from the lack of hanging hair.
The articulation is honestly sort of stupid. NECA has this annoying habit of putting swivels on the ankles of its figures and casting the feet in a weak plastic. This is the reason my Tall Man figure has to lean on his little minion. They’ve done the same thing here with Mr. Voorhees. I’m sure he’ll be leaning in no time, but it kind of doesn’t matter because the fucker doesn’t stand up very well anyway. Moving upwards, the next articulation is a waist swivel. He has ball joints at his shoulders, ball/hinge joints at the elbows, swivel wrists and a double ball-joint neck.
If this was some kind of super-articulated Jason those shoulder and elbow joints would be fine, but since the rest of the figure is basically static they are an eyesore. What else is he going to be doing besides standing there holding his machete, anyway? Well, leaning there. 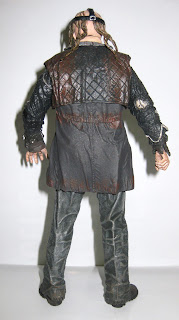 Design: Jason has a ton of paint applications. Everything from his layers of clothing to his deformed face look very real and disgusting. NECA even thoroughly detailed the shirt collar sticking out of the back of his jacket that you barely even see except for when the figure falls over on its face. 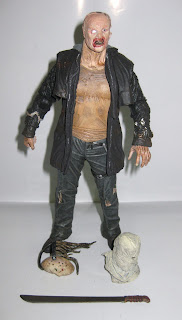 Accessories: Jason includes two interchangeable heads that both look fine except for the whole hair issue on the mask version. He also has his signature machete - and it is HUGE. It’s also nicely detailed and not overdone, aside from being the bastard sword of machetes. 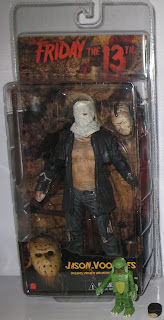 Packaging: It’s NECA’s normal clamshell package. I hate these. I don’t want to have to use scissors to open a new toy. Oh, and that Gill-Man in front has nothing to do with this review. Don't look at him. 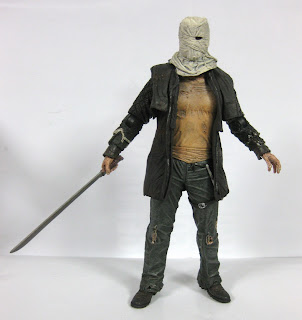 Overall: Meh. It might have been worth buying this guy for my article (probably not), but I don’t think I’d be very happy with him if I was buying him just to have.
2 out of 5 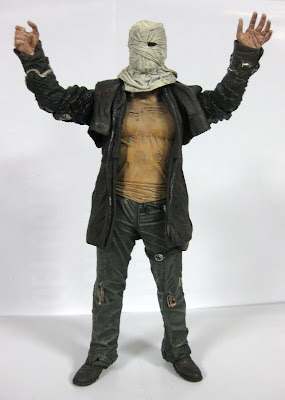