This is the very first toy review I ever did. It has no format, isn't entirely helpful and doesn't do the awesome figure justice. But here it is, in all its totally three years ago glory: 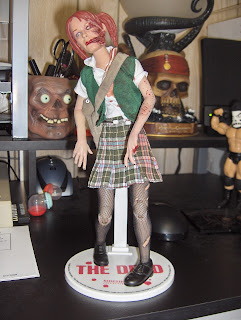 I received this tremendous zombie toy today, so its time for a review! This is the first The Dead figure I have gotten from Sideshow Toys, so I did not know what to expect from packaging. It has a nice, white box with a big, bloody handprint on it. Very classy. I don't generally care about packaging that much since I open just about everything for display, but it doesn't hurt if it looks good! 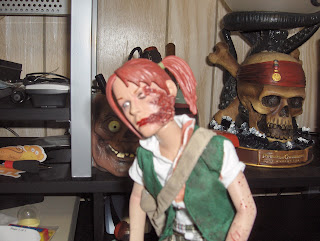 The figure itself is 1/6 scale (my favorite format). First off, let me say that they've done a really great job with the "story" this piece tells. All of the damage is on the left side of the babysitter's body and not overdone at all. It would be very easy to get carried away with this sort of project and just create a heap of gore, but this figure's nasty bits are very refined and believable. The eaten and clawed parts are all the more disturbing when contrasted with the young schoolgirl parts that remain. The facial damage looks amazing - just torn open and very hamburgery. You can even see some teeth through the part of the wound on the mouth. The eyeball on the wounded side is visible behind the remnants of the eyelids. The attention to detail is awesome. The left arm has three claw gashes surrounded by just enough blood spatter as well as two fingers and a thumb. Notice I said two fingers and a thumb. 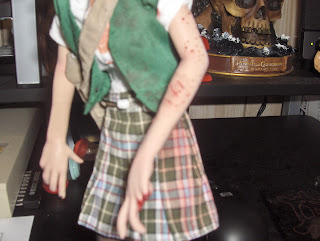 This is because the pinky and ringfinger of the left hand appear to have been bitten off! Only gnarly little stumps remain! Also on the left side are torn fishnets and suitably bloodstained shirt, vest and tartan skirt. All in all the damage looks very feasable and consistent. 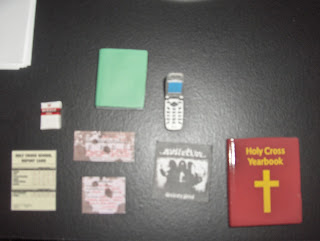 Included with this unfortunate young lady is a white "The Dead" logo display stand (which I would assume is standard for the series), an army-style messenger bag and several goodies that fit nicely into said bag. The goodies indicate that our young damsel in decay may not have been as sweet as her blue eye and red pigtails suggest. They include a detention slip, a failing report card, a pack of "Royale" cigarettes, a flip phone that actually flips open, a Catholic school yearbook (will the naughtiness never end?), a plain green textbook and, best of all, a record album (music used to come on big, vinyl discs, kiddies!) by what would appear to be a death metal band called "Kollectur" called "Walking Dead" (eat your heart out, Kirkman!). The album has a big 'ol goat head pentagram on the back too. 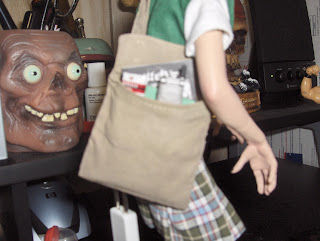 Initially, I was dissappointed that the arms were static from the bicep down, but now I think it was the right call. As much as I am an articulation junkie, if she had regular Sideshow arms it would look really shitty.
This awesome figure makes me regret not buying the previous entries in the collection when they were initially offered. Now I'm gonna have to spend a bunch to get them or hope I can buy them from the guy at DragonCon that always has a bunch of Sideshow stuff for cheap.
Since I haven't done a toy review before, here are my scores:
1 - Buy this immediately, all of your friends will think you are cooler
2 - Buy this soon, you'll be bummed if you miss it
3 - Get this at some point, but it isn't a priority
4 - Wait for clearance
5 - Fuck this piece of crap
I descend from 1 to 5 for toys because 1 is the best, like Funaki. 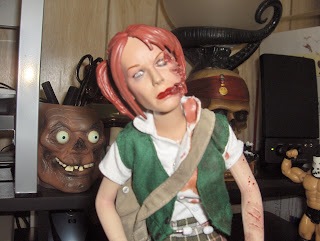 This toy definitely gets a 1. Anything that looks this badass and makes me want to buy the rest of the line is obviously a winner. Way to go, Sideshow!
I would have included sculpting credits, but none were on the packaging. I think Sideshow usually has them on their website, though.