Since the new one just came out, I think it's entirely apropriate and not at all lazy to post my review of the first one. Not lazy at all - no sir. 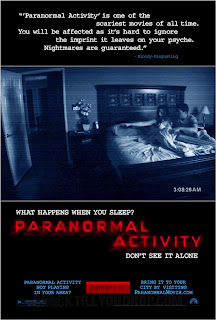 Huh. I'm not sure what to make of this one.

Mrs. Troublemaker was more stoked to see this movie than any other movie we've seen since I've known her. I was pretty excited about it, too. Honestly, seeing two movies in a month is a record for us, much less a freakin' week. The internet had hyped the dhit out of this one. Even our friend, John, had told us it was awesome and had scared the piss out of him to the point where he couldn't sleep. We were both ready to be even more scared than when Obama won the election. Expectations were high. In other words, this neat little movie was kind of fucked from the start.


It is exactly what you've heard. Weird shit is happening to this innocent, young couple; so they decide to get it all on film to send in to America's Funniest Home Videos or something. The girl is sweet and kind of rabbity and the guy is sort of a douche. They are both likeable enough.
The story is actually pretty cool, but I'm not going to give it away here. Suffice it to say, it is just a tad (seriously, maybe a dab; even) deeper than it appears to be. Things do drag a little in between the modest scares, though. I don't want to bee too harsh on the movie, here. The scares were done in an extremely clever way, and were built up very skillfully throughout the movie. Its just that with the limited budget they had, there's only so much you can do. Loud bumping noises are kind of your main option.

The way everything goes down is pretty cool. These people had a budget – I think it was like, $8,000, but I'm not going to look it up – and they did a good job with it. And that is the important thing to remember: this is an INDIE film with almost NO BUDGET! This is not the greatest or even scariest movie ever made. It probably is the most efficient horror movie ever made, but don't go in with all that internet hype in your head about people running out of the theater and injuring themselves and bullshit like that. Just go in expecting a neat little indie film and I think you'll be pleasantly surprised. I sure wish I could have gone in with a less tainted perspective.

Also, you should be aware that the camera work is VERY handheld. If Blair Witch or Quarantine made you sick, then Paranormal Activity will make you throw up your feet. I think they might have actually mounted the cameras on vibrators attached to those little spring-horse things you see in McDonald's Playlands.

Mrs. Troublemaker had a fucking fit after it was over. I had to bring her down from a "STUPIDEST MOVIE EVER!" proclamation to a more reasonable point of view: Paranormal Activity is for people who thought The Blair Witch Project was too exciting and scary.

And that really is it. This movie is from extremely clever people, but it never should have been hyped like it has. It should have seen a low-key release and it probably would have developed a solid following on DVD. As things stand, I'm afraid once John Q. Public has a gander things might fall apart; and that would be a shame because I would love to see what these people could do with some money behind them.

I think you should see this movie, but wait until it comes out on DVD and you've kind of forgotten about it. You might be pleasantly surprised. And not just a little creeped out.

2 out of 5 Mysterious Moving Sheets