Here's a toy review from last year. I like this one because we were just getting the thing out of habit - Rob Zombie, Halloween; had to have it. But it ended up being a superb toy.

This actually came a couple of weeks ago from bigbadtoystore. I pre-ordered it back in May because I thought it would make a great anniversary present for Mrs. Troublemaker. I was right (I have the coolest wife). We didn’t get to really see it until the fifteenth when she opened it, though. 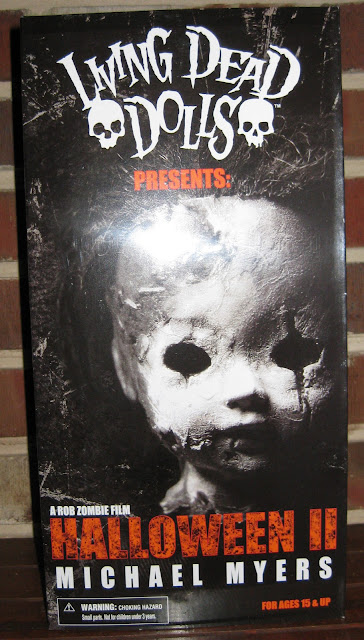 First Glance: Way scarier than the prototype picture that was up when we ordered it. We both remembered that as being creepy but kind of cute. This thing is really just sort of unnerving. And awesome. 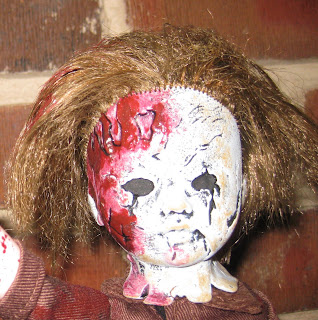 Sculpt: The mask looks about eight billion times better than the incredibly shitty Halloween 2 mask they’re selling at retail right now. That thing looks like it was designed by a blind infant. This doll, however, is almost creepier than Tyler Mane is in the movie. The complete lack of eyes is just wrong. Those empty, black holes seem to follow you around the room. The damage to the mask is sculpted incredibly well, and the missing part behind the right eye is all covered in blood and prompts Lil’ Troublemaker to point and say, “Boo boo”. The hands are your standard LDD hands. 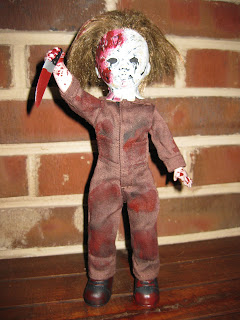 Design: The Shape has rooted hair that acquired an odd Flock of Seagulls style while in the package. We almost didn’t want to fix it. It is appropriately coarse and has some kind of dry gunk in it, so it can be easily moved into a more ominous style. The coveralls have all the requisite gore and random spatter on them, as do the boots. My only complaint is that the right arm came loose in the box at some point. It pops right back into the shoulder socket, but not securely. I’m not really sure if this is intentional so that you can pose the doll with the knife raised or if something is actually broken; because it doesn’t seem to want to stay put. I’m not going to bother with finding out. He’s standing on the shelf just fine, so I don’t want to push our luck. 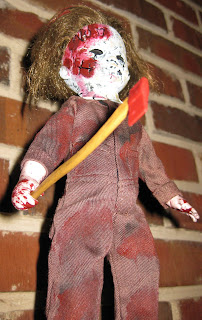 Accessories: Michael comes with a big, bloody butcher knife and the most petite little axe you ever did see. The knife is well done, but the axe is a little disappointing. It looks like a toothpick with something stuck on the end. I would think that Mr. Meyers would warrant a manlier tool of decapitation. 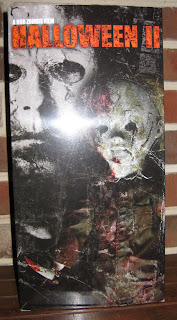 Packaging: At first I thought the box was kind of uninspired, but upon further inspection I realized the design is very subtle and complex. This might actually be my favorite Living Dead Dolls packaging, even over the Captain Spaulding.
Overall: If you are a fan of Rob Zombie, this is another cool collectible with his name on it. If you are a fan of Living Dead dolls, well, you’re probably a fan of Rob Zombie. I recommend this one as a purchase because who knows how many they made and how long they’ll be available. At a measly twenty-five bucks, I think this one is a steal. It got several “No ‘Ween!”s out of Lil’ Troublemaker (his newly found response to scary stuff he doesn’t like) before he got used to it being up on the mantle.
5 out of 5

Until next time, stay creepy,
-Phantom