Last Minute Bonus Post! - DragonCon 2010: Why Steampunkers Should Not Be Allowed

This article is meant as a work of comedy. It is not meant in any way to imply that the subjects herein are in any way lame, socially awkward or completely unnecessary.
This one’s for you, Pete. 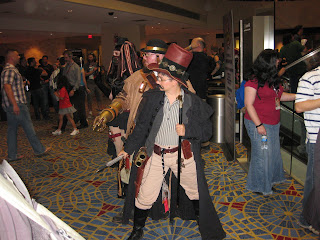 I think we’ve all seen the weirdos with goggles and accordions or fucking bird cages strapped to their backs at this point. Or some ass with a musket and a robot hand. Steampunk is fucking huge and I’m about damned sick of it.
Now I’m not saying we ban this obnoxious niche genre from Dragon*Con entirely; it is a valid interest that entails a huge amount of creativity and has roots dating back to one of the masters of science fiction – Jules Verne. Clearly, these fans play a critical role in making Dragon*Con what it is. I guess.
I just think these gear-adorned, petticoat-wearing geeks should be kept away from the evening activities. Part of it is because their insufferable smugness brings down the tone. Part of it is because their ornithologists will blatantly hit on your friends’ girlfriends right in front of God and everybody. And part of it is their stupid fucking goggles. 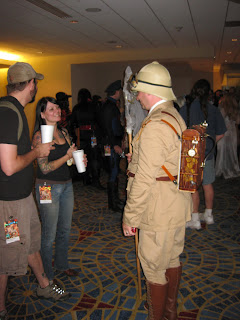 But believe me when I say I have many good reasons for declaring a ban on all steampunkness during the later hours of our favorite nerd gathering. And here they are:
They assimilate everything – like the Borg
This particular niche of nerdery thinks that is perfectly acceptable to stain other genres with their Rube Goldbergian “technology”. They have bastardized everything from Ghostbusters to X-Men to… I can hardly bring myself to say it… Boba Fett. 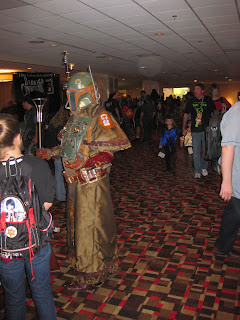 Their accoutrements violate personal space
They stand around the Marriot with giant tubes and pumps and dials attached to their arms or heads or sticking out of their asses or whatever. It’s damned inconvenient trying to navigate around that sort of thing when you’re in a drunken stupor, which brings me to my next point:
God forbid you bump them
All of that delicate, bronze spray paint-covered equipment might break off with the slightest contact. This means these weirdos are in an almost constant state of rotation, constantly whirling about trying to determine who nudged the stupid vacuum cleaner strapped to their back and if the three glass balls on top got knocked off. And man, do they get ornery if they pinpoint you as the culprit; which you are bound to be at some point due to the fact that
They block travel routes
Since most Steampunkers are nerds of the highest order, they live in the state of constant fear that was ingrained in them during their high school years, even at nerd-friendly gatherings like Dragon*Con. This leads them to congregate in groups consisting of no less than five members. When you’ve got six or more groups of five fat nerds with vacuum cleaner attachments and goldfish bowls protruding in every direction it gets a little hard to get back to the bar for another Fanta Troublemaker. And they don’t care because 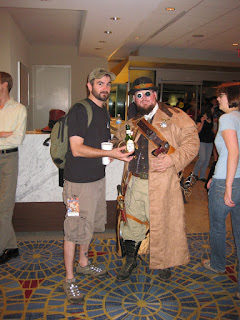 They don’t even drink
They’re all giant techno-nerds that maintain precise control over their faculties at all times so they can come up with genius stuff like bolting a circuit board to a Dustbuster and making a hat out of it. As a matter of fact, after Darth Pete caught the guy in the above picture off guard and tricked him into holding a beer, he exploded in a cloud of cogs and brass spray paint particles. In the evenings, if you’re not in the Marriot to swill down as much alcohol as humanly possible while ogling hot chicks (or dudes) in skimpy, skin-tight superhero costumes then you shouldn’t be there at all. Especially not if you intend to
Accost people in order to explain the stupid, overly convoluted names of their imaginary equipment that is made of egg beaters and PVC pipe
Seriously. I don’t give a fuck what Professor Belltower’s Marvelous Enflibberator would do if it was real and not two “C” batteries glued to a staple gun. Or how many hours you spent making it. Go get me a beer, homo.
There is probably more meanness in this article than is strictly necessary. I hope nobody that reads it takes it seriously enough to come after me with Milo Twinklebottom’s Stupendous Volternator. Unless they have enough room in their personal orifices for a Volternator, anyway.
In the words of a great man,
“Nice goggles.”
Until next time, stay creepy
-Phantom
Posted by Phantom Troublemaker at 1:00:00 PM