It’s about time for another one of my weekly comic book updates.
HA! Yeah, right. I haven’t written one of these in months – but I always mean to; I pick my comic books up so erratically that it never seems worthwhile to review anything. Instead, I’ll sort of generalize the state of my pull list every couple of months.
For the most part things are pretty awesome right now. There are a couple of titles I might be dropping soon, but there are quite a few more that have redeemed themselves lately. Let’s see where everybody stands. 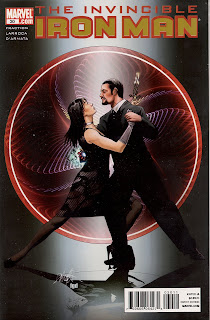 Invincible Iron Man – As of issue 30 I am still loving this one. Like several comics I read the title is working on a build-up right now. I keep reading about this “decompressed storytelling” thing that comics apparently do nowadays – it means drawing narratives out much longer than may be necessary in order to involve more issues of a title in a single storyline. The best example of this is probably Garth Ennis and Steve Dillon’s Preacher, which basically told a single, complete story over the course of seventy-five comic books. The most prolific example is probably Chris Claremont’s run on Uncanny X-Men, which told a single story over the course of like, eight hundred issues.
Back to my original point – Invincible Iron Man is headed towards something big, and when the current issue ends with a car-wrecking, better-than-the-awesome-movie knock-down drag-out between the protagonist and one of the primary villains you know it’s going to be something really big. 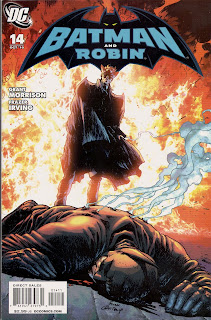 Batman & Robin – The current issue – 14 – of this title is one of the best comics ever. It is typical Morrison bat-shit crazy (pun pretty much intended), but also very coherent and enjoyable. This continues to be a top-of-the-stack title.
GI Joe – I have to say that I’m glad I hung in there on this one. The burn was a little too slow – issues 1-20 are probably a great example of decompressed storytelling being more frustrating than anything – but things are really starting to take off. All of the seeds that have been planted over the last twenty-two months are bearing sinister, familiar fruit. We’re finally getting within shooting range of the GI Joe versus Cobra stories we all know and love. If you’ve been skipping this one and are a Joe fan, now might be a good time to give it a try. 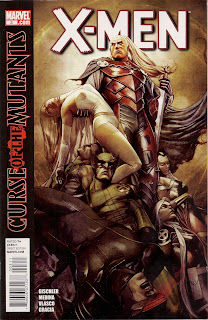 Curse of the Mutants – X-Men versus vampires has me hooked. While I do wish the creative team had overcome the temptation to “modernize” Marvel’s Dracula (and by modernize I mean “make him look like a 90’s-era video game villain instead of awesome like Marvel’s Dracula should be”:

I am still loving the story. I also like the fact that I can follow it without buying all of the X-titles. Granted, X-Factor and New Mutants are on my list anyway, but I can still avoid four or five monthly titles that just aren’t that appealing to me right now. I also really liked the Smoke & Blood one-shot. The adventures of the X-Men’s in-house science team are always a whole lot of fun, and I think deserving of an ongoing title. 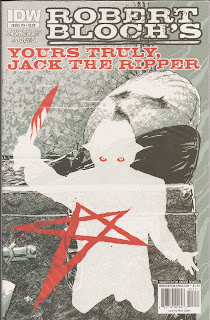 Yours Truly, Jack the Ripper – This was a great adaptation of the Robert Bloch story. It has a unique visual style and a thoroughly readable story (mostly thanks to the amazing Joe R. Lansdale). You can probably still pick up all four issues, or you could just wait for the inevitable trade. 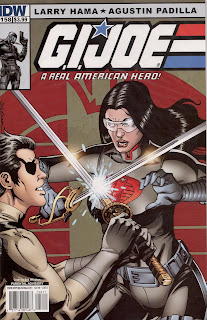 GI Joe – A Real American Hero – I consider Larry Hama to be the true father of GI Joe. He was the man who wrote almost every issue of the Marvel comic and literally wrote every single file card of the ARAH toy line’s original 80’s run. This comic is a direct continuation of the Marvel comic, going as far as to pick up the numbering where the original left off. While this does mean that the wonderful Image and DDP comics are now out-of-continuity; I’m curious to see where Mr. Hama goes. So far it is classic Joe action all the way – a lot more fun to read than the current IDW title. I’m not necessarily saying better; Hama’s style is still a bit 80’s for modern comics, but he definitely isn’t as out-of-touch dialogue-wise as, say, Chris Claremont. I really like this, but if you’re not as big a Joe fan as I am it might not be for you.
Buffy the Vampire Slayer – This series has been about as on-again, off-again as a title can be without me dropping it. In between all the great there has been a certain amount of really terrible. We are currently in a great spot. Issue 36 features Spike as the captain of an airship that is manned by giant bugs. Seriously. Oh, and (SPOILER!) he is telling Buffy not to trust Angel. I doubt I’ll ever cancel this one, especially with Dark Horse getting the Angel license from IDW. I’m very excited to see Angel Season 6.
Batman: Odyssey – I gave up on this one two pages into issue 3. It’s bat-shit crazy (pun definitely intended) in a bad way. Maybe it’s just me, but I think we should maybe leave Batman’s early career alone for a little while. The hip thing seems to be to tarnish the character by making him some kind of unruly, childish brat (this title) or have him wetting his pants during one of the most iconic moments of his career (Kevin Smith – I don’t hate you, but I’m not defending you anymore. How can I? All anybody in a Smith-bashing conversation has to do is point out this childish move. This was a clear example of your immature need for dick jokes overriding your natural storytelling ability. Only this time, instead of fucking up one of you enjoyable-but-one-dimensional man-children; you fucked up The Batman and one of his most-revered stories. You suck.)
Sorry. I was talking about Odyssey. It took me two issues and a couple of pages, but I’m giving up. The art is fantastic but the story just isn’t anything I need.
Green Lantern – This is still following the Brightest Day story pretty closely. I’m digging it just fine, but I honestly like
Green Lantern Corps – A whole lot more. Cyborg Superman is pissing me off more than any other villain right now. Damn this is a good story.
Batman – They’re going to need a good hook to keep me buying this one once Batman, Inc. and Batman: The Dark Knight start up. 701 & 702 were awesome Morrison-penned fill-ins of the time gaps in Final Crisis and 703 is one of many lead-ins to the actual return of Bruce Wayne. After this, I’m going to need some substance to convince me to keep buying.
And you know what? While we're here let's go ahead and discuss Bruce Wayne's new Batman costume:

I don't care much for it, and that isn't helped by this other image:

that looks like art for a 7-11 cup or something. Maybe it'll be better in action, but they need to stop with this shit. Dick Grayson's current Bat-suit is about as different as I can tolerate outside of a video game or movie. And as far as video games go, Arkham Asylum wouldn't have gotten away with that monstrosity if the game wasn't so damned good.
Detective Comics – Bleh. I’m dropping it unless Dini is coming back. This fake Joker storyline has sucked. 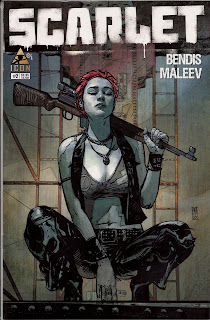 Scarlet – This title is so fucking good I’m going to have to go back and find collections of Bendis and Maleev’s previous collaborations. I’m a huge fan of Bendis’ solo-character titles and have loved what I’ve seen of Maleev’s work. Scarlet has sold me on the team. 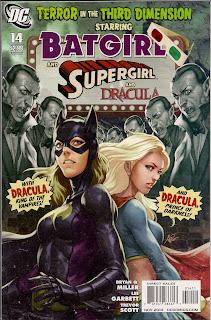 Batgirl – While I can’t honestly say Batgirl is the best monthly title I get, it might well be my favorite. It’s fresh and new and if you aren’t down with the latest issue’s story of Batgirl and Supergirl fighting twenty-four Draculas then we just can’t be friends. This is a good issue to start with, as it is a stand-alone. I highly recommend this series if you like fun, lighthearted comics. I recently composed a lengthy e-mail to Comics Alliance justifying her thigh pouches. Not because I really need that kind of reality in my life, but because I love this title and think everybody else should, too.
Brightest Day – Speaking of decompressed storytelling – they need to get a fucking move on with this book. Didn’t Blackest Night wrap up the main story in eight issues? And here we are at Brightest Day #9 and we’ve barely dipped into what is going on… I’m enjoying the title, it just feels like about two things happen in every issue. But you know what? Anything with Deadman as the central character is getting my dollars. 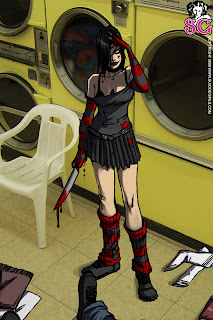 Hack/Slash – This is a weird one because I have two friends who have just recently gotten into the title. Here’s what I had to say on the subject in a recent top-secret communiqué:
I love the new series and really like the art. This is, however, coming from someone who started with the very first issue and watched the quality of art decline steadily over the past five or so years. Some truly horrible artists worked on hack/slash during the DDP years. Particularly toward the end when all the financial troubles started - they really seemed to be scraping the bottom of the barrel. I'm just happy that someone is on the title that grasps human proportions. I do like the art fine, though. Overall 1st Manic has been a refreshing reboot of a property that used to be a top-of-the-stack favorite but was close to being dropped before the move to Image.
So Image is clearly a better home than DDP. Here’s the Suicide Girls link if you’re interested: Cassie Hack: SG
X-Factor – Still great. Still top-of-the-stack.
Ultimate Spider-Man – Ditto.
Birds of Prey – This is the first Gail Simone title I’ve read and I’m totally hooked. This whole White Canary storyline got me immediately.
Batman: Streets of Gotham -  This is one that might get dropped unless it gets a great team or a great story. Or just becomes about The Question, which would be fine.
Garrison -  bought this one because Francesco Francavilla's art is absolutely the shit, but the story did nothing for me. Thankfully, Francavilla will be on Black Panther: Man Without Fear in December. I'll check it out.
GI Joe: Origins - continues to do it better than IDW's flagship Joe title. As long as they continue with the short, self-contained arcs about individual Joes I'll be happy.
The Walking Dead -  If you don't already know how amazing this title is then there probably isn't any way you're reading my little blog. This is one of the greatest ongoing series I have ever read. As a matter of fact, I would say Preacher is the only one that still beats it.

Astonishing X-Men - So there's the ongoing series and also the mini-series; Xenogenesis. They're both great reading and self-contained. As in, you don't need to read any other comics to know what's going on. The art in Xenogenesis is some of the most interesting and original I've seen lately.
Deadpool/Deadpool Team-Up - As long as they're funny I'll keep getting them.
Lex Luthor's Action Comics -  can't stand Superman, but comics about his nemesis sure are great. Especially when they are written by Paul Cornell, who I am very excited about following for the time being. You should go ahead and add Knight & Squire to your pull list right now.
Until next time, stay creepy
-Phantom
Posted by Phantom Troublemaker at 1:00:00 PM