The Super-Incredible Greatest and Best Album in the History of Music
#1
By Phantom Troublemaker
So this is it. What could possibly top Dookie or Raising Hell? What could be so much better than Pretty Hate Machine or Life is Peachy? What album can possibly be more appealing than Stankonia, Black Sabbath: The Dio Years and even the Holy Grail of awesome that is Faith No More’s Angel Dust? What album would I, being made to choose, put before all other albums? Irritated yet? Well, here you go: 1. The Gift of Game – Crazy Town
HA! I kid - Shifty Shellshock is the biggest douchebag name I have ever heard someone give himself. Somebody punch that motherfucker in the dick. There is no way this album should even exist, let alone be on any kind of list other than “Top 10 Albums By Dudes Who Obviously Touch Themselves While Looking At Pictures Of Unicorns” So, seriously: 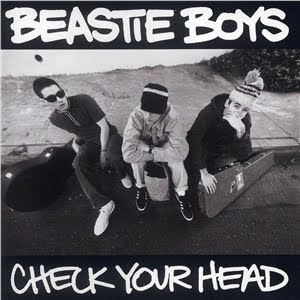 I got this album from a super-shady CD store about a week before the release date. The owners had the store listed as a radio station somehow, so they got promos and early releases of most hip-hop and rap albums that came out, and some rock albums. Needless to say, I was the coolest guy my friends knew for about a week. We rode around in my car (the one with the homemade subwoofer) for hours listening to that thing. Just driving around, aimlessly, being amazed by music. Gas was about 97 cents a gallon back then, so you could do that sort of thing.
I still don’t quite understand how the Beastie Boys fit all of this onto a single disc. I’m sitting here looking at the track listing and wondering if any other album has ever been as packed with such a variety of goodness. Speaking of relentless, if you don’t want to read several paragraphs of blatant ass-kissing and praise, you might as well just know that I think this album is the awesomest ever and consider yourself done with this list.
Jimmy James opens the album up and just kicks your ass all over the place. I think the Beasties’ game has never been stronger than the first four tracks of this album. They let you know that they have returned with some shit you never even could have imagined. Funky Boss is exactly what the title implies, while Pass the Mic is the smoothest hip-hop track on the album, letting you know, “hey, big guy, it’s okay. There are still some singles on here.”
Beastie Boys - Pass the Mic
Uploaded by EMI_Music. - Explore more music videos.

(although I’m pretty sure Jimmy James was a single, too) Then Gratitude pops up to show that these guys could be a great rock band if they decided to.
It makes sense that they follow Gratitude with Lighten Up, just to give you an opportunity to think about what the rest of the album may contain while listening to some hippie mumbling. And then they take off running again with Finger Lickin’ Good, another fast-paced display of lyrical acumen.
Next up is – to my mind - the Beastie Boys’ signature track. So What’cha Want was the video we were all waiting to see and hear back in the day.
Beastie Boys - So What Cha Want
Uploaded by EMI_Music. - Explore more music videos.

I can’t say the video necessarily lived up to the hype, what with the whole weird psychedelic lumberjack vibe, but the song sure as Hell did. That guitar riff is awesome and the flow from all three Beasties is absolutely on point.
The Biz vs. The Nuge. Who the Hell comes up with that? Then we get Time For Livin’, a kick-ass punk rock track, followed by Something’s Got to Give to mellow your excited ass back out and give you a couple minutes to reflect on awesomeness. The Blue Nun is just weird, but we all knew Peter was a pimp, even before pimps were as big a part of pop culture as they are now. Stand Together is another fast-paced hip-hop track that the first time you hear it, you wonder how they would even do it live.
The next four tracks go together as nicely as the first four, feeling like a mini-album of jamming you might hear at a small club. POW kicks off this little quartet and remains my favorite instrumental by the Beastie Boys. The Maestro is my favorite track on the album, and getting to see it live at whichever Lollapalooza they played at was incredible, but I remember being sorely disappointed that Q-Tip didn’t come out to do Get It Together from Ill Communication (Tribe was there, too).
Groove Holmes is another funky instrumental that inspired me to seek out bands like The Meters. Cap those off with more funk courtesy of Live at P.J.’s and you’ve got a hell of a little quartet, there. I really can’t listen to one of these tracks without hearing the rest.
The final four are like a good, quick workout. Mark on the Bus is another weird little thrown-together bit that leads into the classic intro – “Professor, what’s another word for pirate treasure?” “Why I think its booty!” I can’t tell you how many times that line was quoted in my crew. Professor Booty was, for some reason, the new Paul Revere for us. And we all still fought over who got to be MCA. That guy is still the coolest. In 3’s and Namaste let you cool down and recover nicely after the musical field trip you’ve just experienced.
Man, this album just rules. I’ve sat here and listened to it while writing this, and it holds up to and surpasses anything else I’ve ever heard. It is just as fresh and inspiring today as it was when it first came out sixteen years ago. I have had to repurchase it over five times due to wearing it the fuck out. My current copy is the Japanese version, which features several extra tracks, including the awesome Skills to Pay the Bills, one of my favorites.
-Favorite song – The Maestro, as noted above
Well, there you go. That is my untrained opinion. I, despite having been in a band, have no real technical knowledge of music. There probably isn’t much on this list that an artsy music snob would agree with, this is just the taste of a regular guy who has loved music since hearing the first Muppets record when he was five years old. Hopefully at least one entry on here has piqued someone’s curiosity enough to check out something new, or maybe even make a list of their own. If you post it somewhere, send me a link. I’d love to see it. Until next time, stay creepy.
-Phantom
Posted by Phantom Troublemaker at 11:00:00 AM