Top Fifty Albums
Number Two
Well this is kind of a dubious honor to award my favorite band. “Hey, guys, your album is better than every other album I own. Except one. It just isn’t good enough to beat that one. Sorry.” Oh, well. Faith No More doesn’t even exist now, so I doubt they’d care. 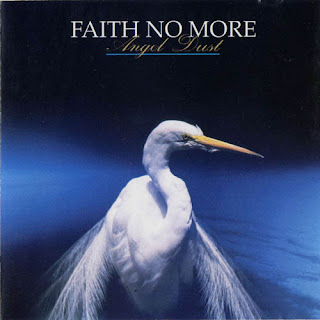 I consider this their second album even though it is technically their fourth. As I mentioned before, Chuck Moseley sounds like a dumpster being fucked by a sloth, so I don’t count him. As far as I am concerned, it isn’t Faith No More without Mike Patton.
I think this is the only sophomore effort (I hate that term, but what else are you going to say?) that I immediately liked. I think I even liked it better than the first album right away. That is very unusual. I really like the numbered format of entry #3, so I’m repeating it here, but about each individual song.
1.Land of Sunshine serves as an excellent bridge between the last album and this one – interesting, not too out there, but definitive Faith No More.
2.And then Caffeine stomps into the room and yells at you about a bunch of stuff you don’t understand (if you haven’t seen the live performance of this song from TRL predecessor Hangin’ With MTV, you need to). According to some, the title of this song is the only drug Patton ever used. After meeting the guy, I actually believe that could be true. You couldn’t ask for a more level, congenial person. He’s really into food. I promise I’ll tell the story of our meeting soon.
3.Midlife Crisis was the first single off the album. I remember the video getting hyped like a week in advance on Headbanger’s Ball (I don’t think they had 120 Minutes yet or else it might have belonged there) and recording it when they finally played it. I still have that tape, but I haven’t watched it in awhile. I used to keep a tape in the VCR at all times to record videos and shows and stuff that I liked. I still have three or four of them – six hours’ worth each. I’m pretty sure I Touch Myself is on one of those, too. That chick was hot!
4.RV is a weird almost country song/dirge-type thing about being white trash. In all honesty I couldn’t really relate to this one when the album came out, but I have since met the character the song is about. Many times over. Patton must have lived in Georgia at some point.
5.Smaller and Smaller is my least favorite song on the album. Remember, though, that bad Faith No More is still way better than good almost anything else – and this song is far from bad. It just doesn’t really get me pumped up the way the rest of the album does.
6.Next up is Everything’s Ruined. It was around this point that I started to realize Mike Patton was displaying a far greater vocal range on this album than he did on The Real Thing. It’s funny, if you listen to the music, the song is very beautiful, but if you listen to the words, it’s a fucking bummer.
7. Hi there! Welcome back to crazy land! After a mellowish three song break, Malpractice reminds you that Faith No More is nuts. This is just a crazy, chaotic display of the free-form sounding stuff that Mr. Bungle fans know so well. Faith No More can do it, too.
8.Kindergarten is a song about kindergarten. But weird.
9.Actual cheerleaders kick off this dirty, dirty song. Roddy Bottum wrote the vocals for Be Aggressive, the chorus of which repeats the phrase “I swallow”. It is about exactly what you think it is about. That filthy queen.
10.A Small Victory is a great, melodic song that inspired a bunch of great remixes. The single for this is great if you can find it. I want the chair from the video.
11.I’m not sure what to make of this. Crack Hitler seems to be Faith No More’s tribute to the funk, and I love it.
12.I can’t sum it all up in a sentence. Jizzlobber is another very strange one that doesn’t seem to be about the title. This would be an excellent song to murder someone to. I’d love to see David Lynch direct a video for this one. Hell, I’d love to direct a video for this one. I’ve had it in my head for years. I do have a video camera…
13.Midnight Cowboy is a cover of the theme song from the movie Midnight Cowboy. It is so similar to the original that I’m not even sure why they did it, but it is an excellent closer for this album.
(This wasn't the best video for this song, but the guy with the accent saying, "Cuckoo For Caca!" at the beginning cracks me the fuck up.)
Man, I just can’t convey how much I love this album. Angel Dust is really the foundation of my musical taste. This is actually my favorite album of all time, but the #1 album edges it out on this list due to listenability. This album is a little dark, and I’m not always in the mood for that. Usually, but not always. Faith No More is a band that got the wrong kind of credit. Everybody knows them for Epic, which was written for the talent-free Chuck Moseley. This band found their voice immediately after that album, but is just not known for having a true, genre-spanning style and one of the most creative, talented lineups ever assembled.
I know I go on and on about Mike Patton, but Billy Gould, Roddy Bottum, Mike Bordin and James Martin (of Bill & Ted fame) all contributed just as much as – in some cases more than – Patton. I feel so fortunate that I got to see them live on the Album of the Year tour – their final one – in as small and intimate a venue as the Masquerade. If you haven’t heard anything beyond Epic, do yourself a favor and pick up Angel Dust and Who Cares a Lot: Greatest Hits.
Tomorrow, number one. Good night and stay creepy.
-Phantom
Posted by Phantom Troublemaker at 1:00:00 PM