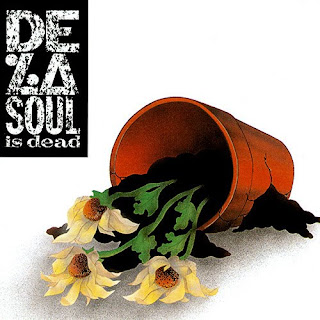 Here is a list of awesome things about this album:
1.It begins in the middle of the game show sketch the last album ended with
2.It is a concept album about a boy finding the new De La Soul tape in the trash, getting jacked by bullies, and the bullies listen to the tape, offering commentary such as “Hated it,”, “Maybe if you put it on 45 so I could dance to it,” and ending the album, of course, with the titular “De La Soul is Dead.”
3.It is suggested that De La Soul owns a donut shop
4.R&B is referred to as “rap and bullshit”
5.There is a dis track about Burger King
6.There is a song called A Roller Skating Jam Named “Saturdays” featuring Q-Tip
7.On the CD release, there are tracks not included on the cassette (I can’t recall which ones, but there are two)
8.De La questions organized religion throughout the album, which is rare in hip-hop (I do not have a problem with Christianity or most other religions, but I am a bit wary of The Church, which seems to be their deal)
9.There is a dis track about house music
10.Ring Ring Ring (Ha Ha Hey)
11.They portray a radio station called WRMS throughout the album
12.There is a dis track about demo tapes
13.One of the bullies calls our hero an “Arsenio Hall gum-having punk”
14.The opening of Let, Let Me In (and the rest of the song, too, but that opening is awesome)
15.I bought the tape cassette version used at a music store near Georgia Southern when I went there for a visit to see if I wanted to go there (NO.) It was easily the best thing that came out of that trip. My dad refused to believe that everybody else went drinking that night. “The drinking age is 21. Nobody here is that old. How would they even get into a bar?” He went to college! My father is not stupid, but sometimes I wonder if he wasn’t born 40 years old and wearing a suit. Either that or he was so insane that he can’t even admit to knowledge of any subversive activities for fear of reverting into his old, James Dean-esque persona of anarchic madness. I kind of doubt that last one.
16.A girl I was into who really liked this album tried very gently to explain to me the ways that I had no game. I should’ve listened.
What a great album. Fun, thoughtful and fast-paced; it stands out even among the De La Soul trinity that also includes 3 Feet High and Rising and Buhloone Mindstate. If every person on earth was the sort of person who could appreciate this album, we’d be in a lot better shape than we are.
-Favorite song – Let, Let Me In
Only two left to go. I have to say that this list has surprised me. I highly recommend this exercise to anybody who would like to have a little more self-awareness along with the opportunity to relive some things that you may not have thought about in awhile. Unless, of course, you’re an asshole. Then you probably don’t have many pleasant memories. Stay creepy.
-Phantom
Posted by Phantom Troublemaker at 1:00:00 PM