Top Fifty Albums
Number Four
By Phantom Troublemaker
I lied. I will tell you all about it now. 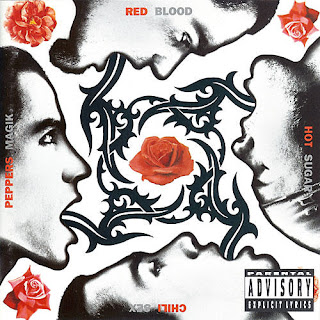 So remember in the last post where I said I’d save my exception for later? Well, this is the thing that kept this album from being #1, but the rest of the album is just so fucking good it still made it this high on the list. This exception should have kicked this fucker right off, but I just couldn’t justify that.
I skip Under the Bridge every single time I play this thing. I do not ever want to hear that song.
Part of it is that the song just sounds so pussy. Anthony Kiedis whines his way through this groan-inducing lament like a little girl with her shoes on backwards. The instrumentation is weak like watery Pepsi. The video looks like Baz Luhrmann (sp?) directed it with Kiedis’ cock in his eye. What the fuck are all those shirtless running shots about? And the super-imposing? What? Flea looks like he wants to make sweet love to a unicorn for fuck’s sake! (In a hilarious coincidence, I just noticed that the non-embeddable video for Under The Bridge was directed by Gus Van Sant. I'm not going to disparage the talented director, but I think you can guess why I find that funny as shit.I did find a reasonable substitute for that video, though.)
The other problem involves a girl and I’m not going to talk about it even though it was stupid at the time and is even more stupid now that I’m married to the coolest girl in the world and have the coolest son in the world. It doesn’t matter a bit, but I just am not going into it.
So anyway, this would be the greatest and best album in the world but for that exception. Every time I listen to this album, I am amazed by it. I would love to have a film documenting the creative process that went on in the haunted house (I think) that they recorded this in with madman Rick Rubin. I’m trying to think of a shitty album Rubin produced, but nothing is coming to mind. There has to be one, right? (That’s what the comment section is for, folks)Rick Rubin aside, The Chili Peppers must have shot their creative load on this one because everything since has sucked. The worst part is that you still get glimmers of greatness in their new stuff, but then that fucker starts crooning again. They’re a fucking adult contemporary band now. The local easy listening station plays them, I shit you not.
Note: None of their official videos can be embedded, so I'll just be using some live videos I found.
Therein lays the magic power of Blood Sugar Sex Magic: enabling you to forget that it is the last, great work of a band that has since put out four albums that are utterly charmless.
You know what? Forget that last sentence. I don’t want to talk about how much the Chili Peppers suck now; I want to talk about how great this album is. This album rocked me all the way through high school. Give it Away blew everybody’s mind the first time they heard it. Suck My Kiss was all aggressively funky and Breaking the Girl was the first ballad/slow song that I ever liked (aside from Anthrax’s, but I’m not sure that really counts…). Other than that one song, everything on this album just takes you on this journey of awesome music. When my Zune is on random and a track from Blood Sugar Sex Magic plays, I usually end up listening to the rest of the album. It’s one of those things where you hear Funky Monks and you go, “Oh, man, I want to hear Apache Rose Peacock, too.” If you don’t love this album then I really can’t talk to you.
-Favorite song – Sir Psycho Sexy
So there you go. Number four. The funny thing is, I would probably pick this as the #1 best album of all time if I were doing that list. But I’m not. Until tomorrow, stay creepy.
-Phantom
Posted by Phantom Troublemaker at 1:00:00 PM