Top Fifty Albums
Number Five
By Phantom Troublemaker
Well, it’s time to see if I really have as much to say about the top 5 as I thought I would. If not, just be glad you don’t have to read as much. Here’s #5. 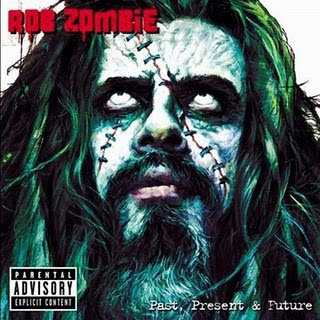 5. Past, Present and Future – Rob Zombie

Rob Zombie is probably my favorite creator working today. I love his music, his movies and his comics. Okay, so his comics weren’t really all that great, but the ideas were awesome. He probably just should’ve gotten someone else to handle the dialogue (I’m still stoked about the El Superbeasto movie). Zombie has this magical ability to make the macabre accessible, which to me is more impressive than just making weird shit that only two percent of the population can understand and appreciate. I mean, the guy made a pop song about the Munster’s car. Who does that? We should be so lucky that all pop music was this cool. Monsters, titties, robots and hot rods. There you go.
I really wish I could allow myself to just stick all of Zombie’s work - including White Zombie - in this one slot, but I’m sure as Hell not gonna be listening to his whole catalog in one sitting, so that throws that right out. I’ll save my one massive exception to the rules of this list for later.
Past, Present and Future is another “greatest hits” compilation, only this one deserves it almost as much as the Crue one. Most of the songs on here have received fairly heavy radio rotation at one time or another, some are still getting it today. The closest thing to a bad Zombie song I have ever heard is on this album, too. There is a cover of The Ramones’ Blitzkrieg Bop that isn’t necessarily bad, just, well… awkward. The style of Zombie’s music just really doesn’t lend itself to punk covers apparently. I still listen to this one every time, though. Maybe I’m hoping I missed something.
As far as live Rob Zombie memories go, I saw him play at the boiling hellhole that is the Lakewood Amphitheatre a few years ago on Ozzfest. I think it was the same one System of a Down headlined because Ozzy fell in the shower (seriously). It was about 243 degrees outside, and me and my buddy, Terry, had crawled behind a concession stand under some trees to try and hide from the mean, evil sun. I’m talking a serious hobbit-hole, here. We would tentatively emerge every now and then to watch the bands we wanted to see. Some bands we decided we could hear just fine from the hobbit-hole. Finally it was time for Zombie. The first thing he said after opening with whatever song he opened with was, “Why is it so fucking HOT out here?” I don’t think he said it to be funny, but it was. He would continue to complain about the heat through his whole set (understand this – it was so fucking hot that I wouldn’t have blamed him for packing up his shit and going back to California and never, ever coming to the South again.) but the awesome part was that he never stopped rocking asses for even one second. That man jumped around, grooved and shouted his ass off. It was all I could do to lay on the grass and watch a show. I can’t imagine having to put one on for an hour-plus. This was one of those key moments when someone you like a lot becomes a hallowed, favorite artist.
All in all, I can listen to Zombie pretty much any time, any place; which is a common characteristic of every album beyond this point.
-Favorite song – Demonoid Phenomenon
Not much else to say except I can hardly wait for El Superbeasto and more information about Tyrannosaurus Rex.
Note: I saw Zombie again at the Mayhem Festival on August 1st and he was so fucking incredible we didn't even stick around for Korn. I like Korn and all, but there was no way they were going to live up to what Zombie had just done. The man is a motherfucking entertainer. Plus, he must've gotten used to the heat because he gave us over an hour of non-stop awesome. This song isn't from the album this article is about, but fuck it:
Until next time, stay creepy
-Phantom
Posted by Phantom Troublemaker at 1:00:00 PM