Alright, I’ve got to do some writing. Carlito has cursed me with the knowledge of a site called VigilantCitizen.com and I’m starting to get a little uncomfortable. Especially after seeing that new Kanye West video. So in order to prove that I’m just another of the pliable, ignorant masses; here’s a new toy review! See, I don’t need any Monarch Programming!
While Toys R Us may be charging $9.99 for the new Vintage Collection figures, everybody else seems to be sticking to the $7.99 price point. Which means I waited until I could find the rest of the Vintage figures I wanted at Target or Walmart. I picked these two up at the Target that it seems like I get most of my toys from nowadays.
Hasbro is very clever about releasing pilot figures at the same time as their respective vehicles now that pack-ins are such a rarity. They are also extremely clever in the fact that several of their vehicles require multiple figures to be properly manned: the Bespin Cloud Car needs two pilots, as does the Rebel Snowspeeder. The AT-AT needs two drivers (though it does include one), a Commander and at least seventy-three Snowtroopers to seem properly staffed. Oh, and you’re going to need somebody to drive that Speeder Bike, too. And a Hoth Luke to hang underneath it.
All of the above vehicles are pretty awesome. Has Hasbro made figures awesome enough to pilot them? Let’s find out… 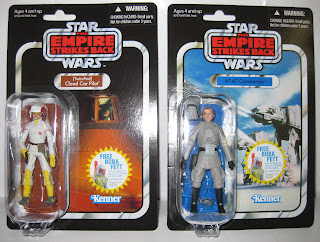 First Glance: I’m still loving the new packaging. I am obviously a big chump for nostalgia, so the coolness of the Vintage Collection isn’t likely to wear off any time soon for me. Both figures look really solid on their blister cards. I’m loving that the Cloud Car Pilot has a mustache. 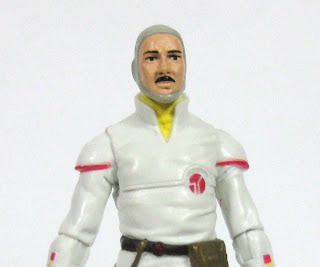 Sculpt: I think the Cloud Car Pilot is another case of above-and-beyond on Hasbro’s part. For a character that we never saw more of than that trademark helmet, they’ve really created a figure with a signature feel. Granted, the original release was a stand out within the line with its white jumpsuit and bright colors; but this update has really improved on the concept. From the padding on the legs of the flight suit to the way the gloves meet the wrists to the folds on the suit itself. This guy really just looks great. Plus, working holster! He also has whatever scanning device or comlink that the old one came with sculpted onto his belt. It looks good and probably didn’t need to be a separate accessory anyway. I am rethinking the mustache, though. Since I’m going to need two of this guy, it does make him a little too distinctive to double up on. I’m gonna be doin’ some head-swappin’. He has all the articulation you could want from a 3 ¾” scale figure and can hold his blaster, but there is one glaring problem. What’s the one thing a pilot figure needs to be able to do more than anything else? Sit down. 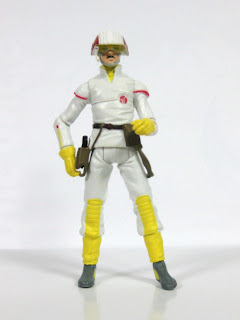 Unfortunately, this guy’s tunic hangs a bit long and interferes with his legs coming all the way up at the hip, so he sort of reclines with his butt up out of the seat when he’s in his vehicle. Bad move, Hasbro, when you pilot can’t sit in his vehicle properly. He looks great just standing around, but I would’ve taken a shorter shirt if it meant he could sit all the way down. He does sort of look like Dabney Coleman, though, so that’s a plus. 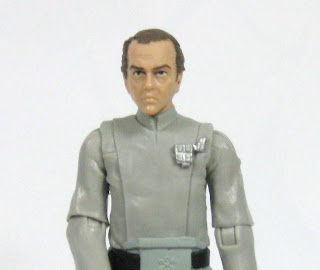 The AT-AT Commander is an extremely nice-looking Imperial. His head sculpt seems very specific, so I’m wondering who he is meant to portray. He has a sort of armor vest over a standard Imperial Command uniform and it works really well. There are even rank insignias underneath the vest. He has great articulation and looks pretty cool with his hands behind his back – like any Imperial should. He can hold his blaster, too. I’ve got a feeling they’re going to be using this buck again. Oh, and he has a functional holster, too. 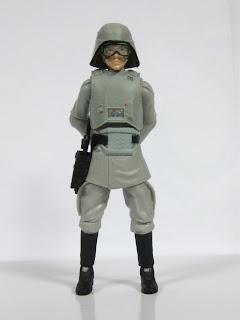 Design: The AT-AT Commander is a lovely shade of Imperial grey (or is that gray? I never know which one to use) and has a nice gloss on his boots and gloves. His head sports a very tight paint job, something nice to see after other offerings of late. All of his rank markings are nicely painted, but the ones under his armor vest are just silver. They look neat, but I’m thinking that’s not quite accurate. One of this figure’s biggest fails, however, is one that is all-too-common among modern Star Wars figures: his ankle joints are not the right color. They are colored like his uniform, meaning you have these terrible-looking grey rectangles right in the middle of his boots. Stop doing that shit, Hasbro. It’s just lazy. 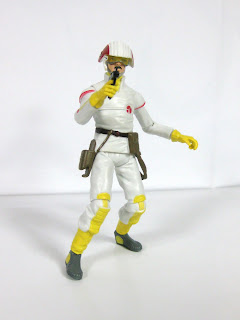 The Cloud Car Pilot looks exactly like he should look, paint-wise. He is the same shades of pale yellow and orange as the original. He does, however, have a similar problem to the AT-AT Commander – his knee joints. The yellow padding goes over his knees, and rather than color the joint underneath yellow; the sides are white and the middle is yellow. This leaves a yellow stripe down the middle of the knee. It looks weird, but isn’t nearly as bad as the Commander’s boots. 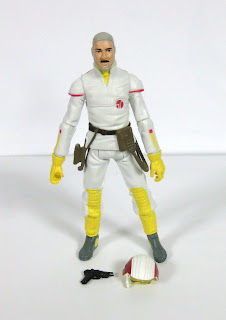 Accessories: The Cloud Car Pilot has a blaster and his helmet. The blaster is pretty neat and unlike any other Star Wars weapon I have seen, just like the original’s; though this version differs from that one. The helmet is great, with clear goggles molded on and great sculpting and paint. It fits on his head perfectly. 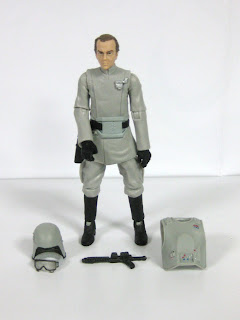 The AT-AT Commander comes with goggles, a helmet, a blaster and his armor vest. The vest fits perfectly and looks good. The goggles fit on his head perfectly, as does the helmet. The problem is that the two of them don’t really work together. The goggles can’t fit on top of the helmet, and if they are underneath the helmet bows out too much and makes this guy look like a Spaceball. Not good. 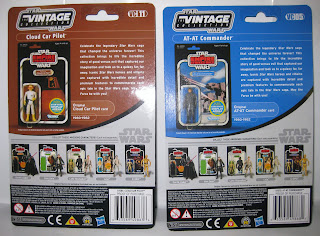 Packaging: We all know how I feel about the packaging at this point. It’s just amazing. 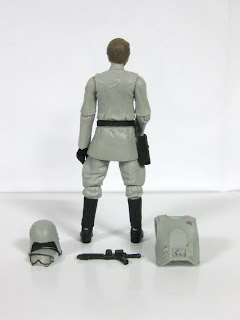 Overall: I really, really want to like these guys, but they are both somewhat flawed. While I am bothered immensely by the AT-AT Commander’s boot problem, the Cloud Car Pilot’s poseability is much worse. The boots are likely a quality control issue that might well be addressed at some point. The Pilot’s inability to sit fully is a problem that should have been caught at some point during the development; probably early on. Either that, or Hasbro just said, “Fuck it.” And I don’t want to believe that. Either way, both of these scores are lower than I wanted them to be because I like both of these character concepts.
AT-AT Commander: 3 out of 5
Cloud Car Pilot: 2 out of 5 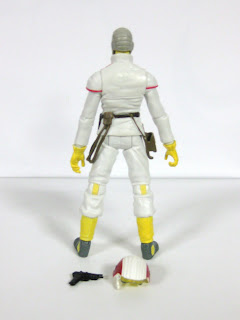 I know! That’s really low on our Bespin pal. I just can’t overlook the fact that his only job is to sit in a Cloud Car and HE CAN’T DO IT PROPERLY! It’s like a drive-thru worker who can’t speak English. Who thinks that’s okay? Other than Burger King, I mean…
Until next time, stay creepy
-Phantom
Posted by Phantom Troublemaker at 1:00:00 PM