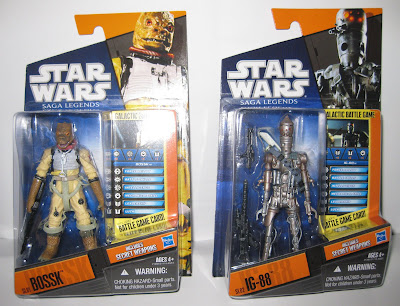 I know these two are reissues (as all figures under the Saga Legends banner are) but I have no idea when they were initially released. It must have been more than five years ago, because I’ve been in my current Star Wars collecting mode for at least that long. As soon as I saw the lineup for the current Saga Legends and accompanying Vintage Collection (which are mostly new sculpts on different cardbacks and cost $2.50 more because Hasbro knows we are chumps who will pay that for characters we really, really want and sometimes even for characters we only kind of want but really need to go in the cockpit of that new cloud car. Fuckers.) I knew I was buying these two.


First Glance: They both almost look too fancy to be part of the non-collector line. Not to suggest that Saga Legends can’t be nice figures, but it is the more kid/mass market-oriented line. The Vintage Collection is definitely aimed at collectors with its old-school packaging and snooty price hike. 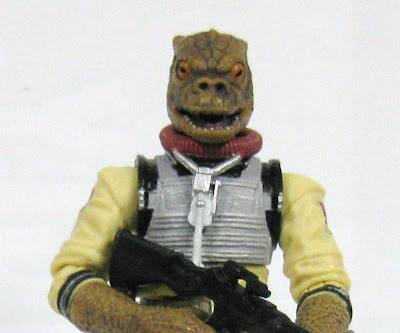 Sculpt: This Bossk looks about a billion times better than the last Bossk I bought. All of his hanging parts (straps, the necklace thing) are actually separate little pieces as opposed to sculpted onto the main figure. He has little scales sculpted all over and actually appears to be sneering a bit in the face. He has the great articulation we’ve come to expect and stands with no problem. Also – HIS HANDS CAN ACTUALLY HOLD HIS FUCKING GUN! What? Yes! Seriously! Magic penguins must have sculpted this figure! 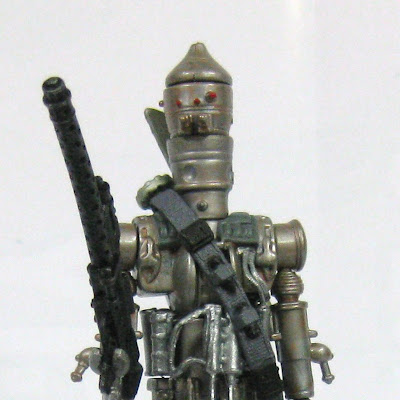 IG-88 looks equally great. I still haven’t figured out all the places it’s articulated. IG-88 has a shit-ton of circuitry and wiring sculpted all over it and just looks very menacing and robotish. It looks like it could fight a Dalek and maybe even win. 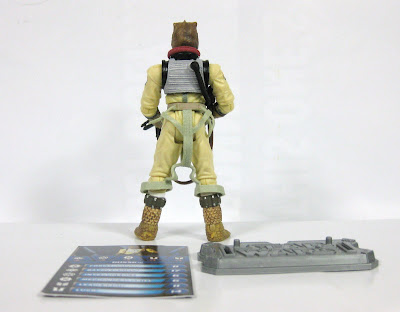 Design: Bossk has a truly outstanding paint job. There are at least two apps on his scales and all of his clothing looks appropriately worn. His face is detailed wonderfully. 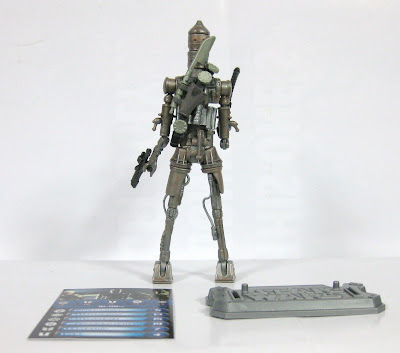 IG-88 looks battle hardened and worn - there are several washes on the limbs and torso that make me curious to compare two different figures to see what kind of variations there are. His visual receptors and various other points are painted well. 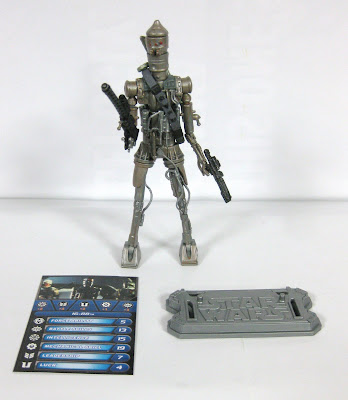 Accessories: IG-88 includes a blaster rifle, a Stormtrooper gun and some kind of blade thing, as well as a bandolier with a slot for the blade thing and a holster. The problem is that none of his guns fit in the damn holster. You know what, though? I just remembered that he – like all Saga Legends figures – came with a buttload of extra guns. Maybe one of those will fit in there. 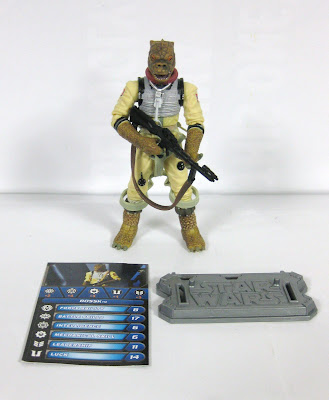 Bossk comes with a blaster rifle that HE CAN ACTUALLY HOLD! It’s only one accessory, but it’s enough!

Both figures come with a baggie of extra guns (about 5), dice for some game the Clones play, a stat card for some game bigger nerds than me play and a stand. I like the look of the new stands (which the stat card slides into), but I hate the functionality. The pegs are spaced too far apart. DO NOT put IG-88 on his stand. It spreads his legs out and I doubt you will ever be able to get him to stand without it once he’s been on there for a while. He can stand just fine without it. 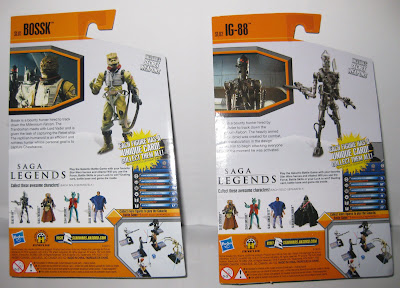 Packaging: I really like the new package design Hasbro is using. The old Clone white just seemed too dull to me, kind of like Walmart’s new all-white Great Value stuff. Blah. 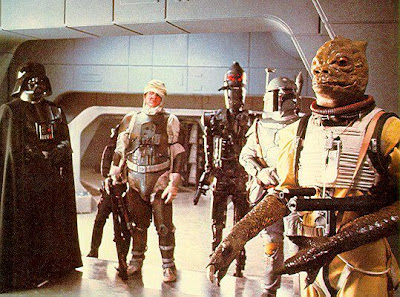 Overall: These were must-haves anyway, but they turned out to be excellent figures that went above and beyond. I can’t imagine we’ll get better versions of either of these characters any time soon.