I wasn’t quite as excited about this new snowspeeder as I was about the cloud car. I would have been hard-pressed to find anything wrong with the last snowspeeder Hasbro did, which I thought was leaps and bounds ahead of the original or even the Power of the Force model. But, fans and Hasbro both insisted it needed to be smaller to be movie-accurate, so I guess I’m in. I can’t say no to some new Hoth stuff. Hell, I generally can’t say no to new Star Wars stuff at all. 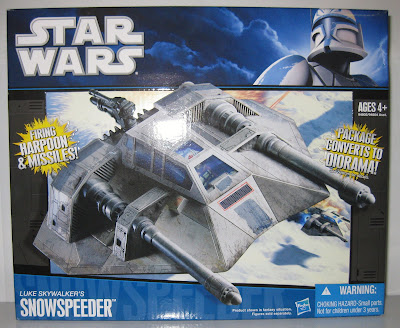 First Glance: This one is sporting the same swanky, new box design as the cloud car. I really dig it. When I opened it, I was pleased to see that a bit of assembly was required and I was going to have some stickers to put on. Awesome! I can’t tell that it is any smaller than the one hanging in the Man Room. I’ll check in just a bit… 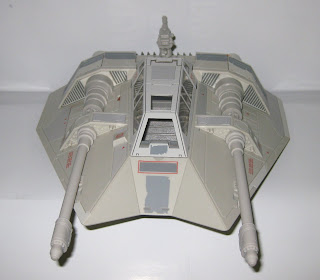 Sculpt: Yeah, it’s smaller. Like, a tiny little bit smaller that I had to really find just the right angle and way of looking at the new one and the old one to see it. Believe me – I appreciate the irony inherent in picking at the fact that the vehicle I paid eight dollars more for isn’t much smaller than the cheaper version.
Size issues aside, the new one looks really good. It has all kinds of neat features. There are two different sets of cannons – a larger set that fires missiles and a smaller set that don’t but are more screen-accurate. There are also two harpoon guns, a large firing one and a small one. The awesome thing is that Hasbro sculpted an ingenious little storage compartment under the back end of this thing to keep the line for the harpoon gun in. It always bothered me that that string was hanging off the back of the other one like it was on the ra… never mind. This new snowspeeder also features the same working flaps and landing gear of the last one. 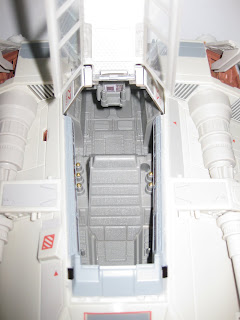 I never imagined I would be impressed by a cockpit, but this snowspeeder has done it. The pilot’s area looks like it should, with all kinds of crazy detailing; but it’s behind that where you find the amazing attention to accuracy. There is a spot to store the hand-held harpoon gun that comes with the recently released Hoth pilot Luke figure. The new sculpt also has a set of controls for the speeder’s harpoon gun that a figure can actually hold. It’s all pretty amazing.

Design: As far as the paint goes, this one actually doesn’t look quite as neat as the last one. Granted, it is Luke’s snowspeeder, so there should be differences. Something about this one just looks a little too neat and pretty. As I was writing this it occurs to me that the new snowspeeder almost looks like it is from the Clone Wars cartoon. Maybe it’s just me, I don’t know.
I was pleased that there were stickers to apply until I realized what a pain in the ass some of them were going to be. The one that goes on the harpoon gun control panel is the biggest bitch I’ve ever had to put on. I actually had to use tools to get it in the right spot. Once they’re in, though, they look pretty swanky. 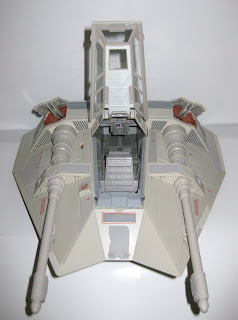 Accessories: I guess I should have covered all of that stuff about the extra cannons and harpoon gun here. Whoops.
Packaging: It’s the new look and I like it. Keep the diorama backgrounds coming, Hasbro – I’ve got more wall to cover. 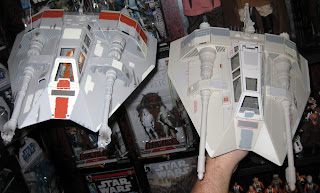 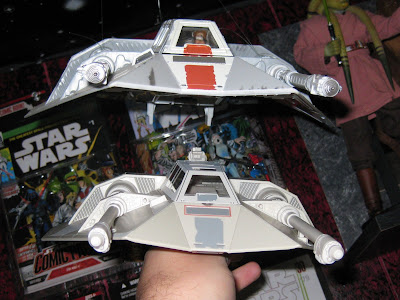 Overall: I’m glad I got it. It wasn’t a very necessary upgrade, but Hasbro took the opportunity to make a great new toy. If all future new sculpts have this much attention to detail and huge amount of pack-in accessories and options, I could almost support the new $27.99 price tag. Almost. This one is a worthy purchase for kids or collectors, especially if you plan to buy the new gi-fucking-gantic AT-AT. The rope this one comes with is a whole hell of a lot longer than past releases, and from what I’ve seen of that Imperial walker; it had to be.
5 out of 5
Until next time, stay creepy
-Phantom
Posted by Phantom Troublemaker at 1:00:00 PM