Kenner’s classic Twin Pod Cloud Car was always one of my favorite Star Wars toys. I don’t know why. The thing only appeared in the original version of Empire for about twelve seconds and didn’t even shoot or anything. Regardless, I was very excited to find out that Hasbro was producing a new version for Empire’s thirtieth anniversary this year; not to mention new versions of the Rebel snowspeeder and the Imperial AT-AT. We’ll look at whether or not the snowspeeder was necessary later on, and I haven’t found an AT-AT yet. For now, let’s check out our shiny, new, orange Cloud City cruiser. 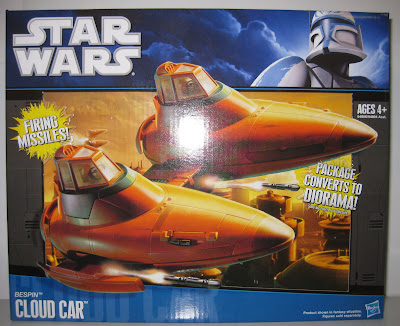 First Glance: The box is much more appealing than the packaging design Hasbro has been using for the past couple of years. I’ll get to that later. Much to my disappointment, very little assembly was required. I miss the good old days. Oh, and Hasbro has jacked up the price on the middle-sized vehicles. Again. Look to pay three dollars more for anything in the new packaging, even if it’s just a reissue like the Jedi starfighter and Republic tank that came in the case with this one and the snowspeeder. 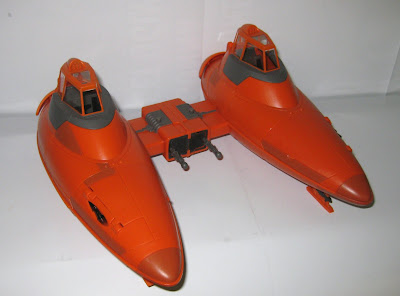 Sculpt: You can immediately tell there is more detail on this new version than the original. It is also noticeably smaller. I am going to take Hasbro’s word that this is more movie accurate. I’m not the sort of guy who knows stuff like that by looking. One thing Hasbro has gotten ridiculously good at is incorporating kid-friendly action features into collector-friendly toys. There are four missile-firing spots, two of which are revealed by sliding the pods toward the center of the vehicle; the other two are easily concealed for the sake of movie accuracy by simply removing the missiles. The two pods separate in the middle to create two vehicles. Also, each pod has a storage compartment near the nose to keep stuff in. I’m going to put Pez them. That dammed Vader keeps stealing mine. 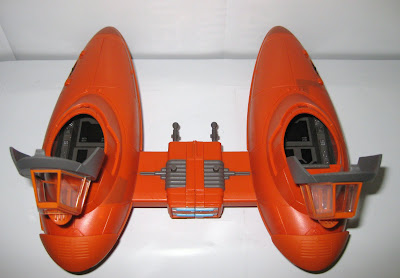 Each pod has an intricately designed cockpit to put the conveniently currently-available Twin Pod Cloud Car Pilot in. You’ll need two, of course. 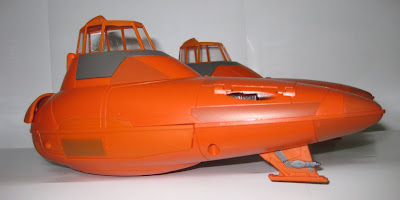 Design: The paint app looks great. This cloud car is a slightly darker orange than the original, and sports a little bit more detail. The cockpits and storage compartments are nicely detailed, as well. No labels, though. It’s a bummer to not have any stickers to clumsily apply, but none are really necessary for this vehicle. 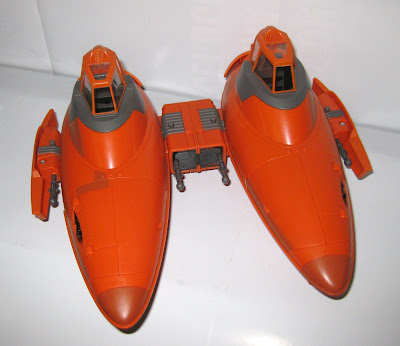 Accessories: You get four missiles with your cloud car. I’m not sure what else you would need. Other than a pilot, I mean; and Lord knows we don’t want to pay what Hasbro thinks that would cost. The Toys R Us Exclusives that came with pilots were forty fucking dollars – fifteen more than the same vehicles with no pilot. Absurd. 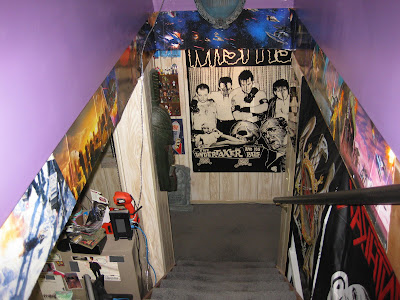 Packaging: : I love the new packaging. I think it looks much nicer than the old all-white Clone stuff. I’m glad they’re still doing the diorama backgrounds, too because I just used all of mine to wallpaper my stairway. 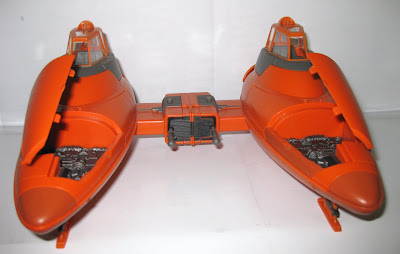 Overall: I was already having a hard time shelling out twenty-five bucks for vehicles. Now that the price is $27.99 I’m going to be getting very picky. The cloud car was worth it to me just for the nostalgia, but if you’re buying it for a kid or are not specifically a fan of the vehicle or all things Bespin, I can’t really recommend it. It’s neat, but it is hardly one of the more exciting vehicles Hasbro has made; particularly for the new price.

Stay tuned for my Red 5 Snowspeeder review next week. Tomorrow I've got something pretty great lined up.
Posted by Phantom Troublemaker at 1:00:00 PM