This was originally the opening to my review of the Peter Venkman figure, but it got too long.

After months of ordering Mattycollector.com’s exclusives relatively trouble-free and reading time and again the horror stories people were posting in toy forums across the internet; the inevitable finally happened.

Ever since the very first figure I ordered from Mattel’s specialty direct-market website (it was the SDCC exclusive slimed Egon Spengler) I have been reading about the problems other customers were having making orders on release days. Once a month, Matty will have a sale day when new figures are released. These figures will remain available until they are sold out. This may occur anywhere from six minutes to three days (or so) after they are initially listed. You can see where this might cause some excitement and consternation among toy nerds.

The problems people have experienced on the release days range anywhere from multiple charges to their credit card to items being removed from their cart before they can check out to the site simply shutting down due to sheer volume of traffic.

And then there’s the waiting. Everybody has to wait. Anyone who has ordered from Matty on one of these days has spent at least ten minutes staring at this irritating page: 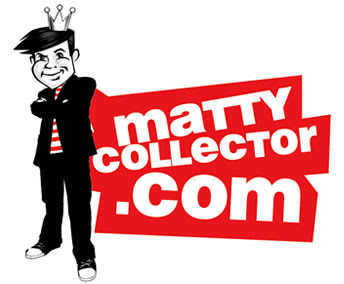 Normally there is a message underneath it that basically tells you just to be patient and wait and not to keep trying to access the site - you'll get there eventually. I thought I had saved the text, but I was wrong.

The day that Peter Venkman went on sale, Matty was also offering She-Ra and Keldor (Skeletor’s previous identity) from the Masters of the Universe Classics line, as well as a previously extremely hard-to-find wave of DC Universe action figures. Traffic was high as usual, but this time I experienced the pain.

I signed on ten minutes before noon – the time that everything would be put up for sale – and immediately got that damn screen. I left it alone – after all, it states that you are in a queue in the order that you signed on, right? Well, that’s the funny thing about that page – it’s a lie. Twice now I have opened the page in another window and gone straight to the store while the other window just sat there, refreshing. Fellow toy enthusiasts have confirmed the same experience.

So as I stared at that page, I passed the time by opening other browsers, tabs and windows and attempting to get to the Venkman page. I didn’t need Keldor or the DC stuff and She-Ra isn't my bag. Granted, I realize that everybody is doing this and that it is likely part of the traffic problem; but even with double the traffic the problems that are occurring shouldn’t be.

Noon came and went and I still could not get in. About fifteen minutes after noon I finally got to the Venkman page and added him to my cart. I hit the checkout button and got the wait page again. That page never went to checkout the whole rest of my experience. I opened another window and attempted to get to checkout. Eventually I got to the Matty home page and saw that my cart was showing up, so I clicked on “cart”. After several minutes I got to the checkout and entered my information. A failure message came up, I got booted out of the site and when I finally got back to the home page there were zero items in my cart. This sort of thing went on for forty-eight fucking minutes until I finally closed all of my browsers, started over again and the process actually worked like it was supposed to. In my rage (and forty-eight minutes of waiting) I made this little gem in response to my negative experience: 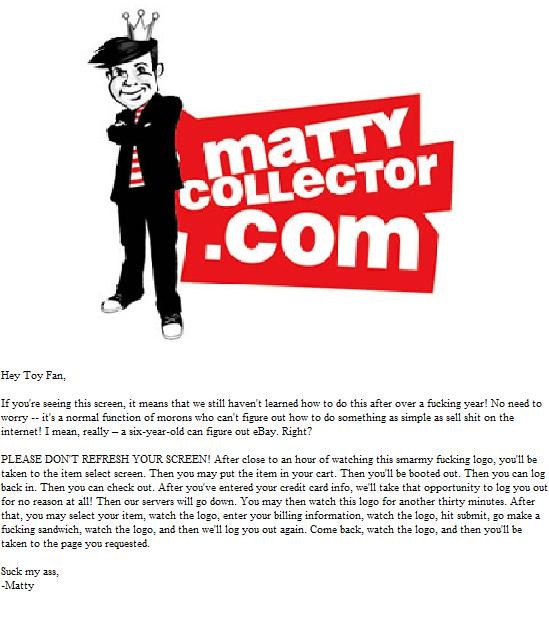 I sent The Belligerent Monkey a link to my funny little picture and he promptly put it up on Mattycollector’s message boards, which I thought was pretty fucking awesome and was relatively flattered by; particularly once I saw some of the positive responses from the board members there. Mattel, on the other hand, had a much different response. They took the threads down. Like, the whole entire thread that the link had been posted in; both of them. I was kind of surprised.

I know it might be a little mean, but look; Mattel has fucked up consistently for well over a year now and has not improved their broken system one little bit. They should be ready for some pointed criticism. Unlike some collectors, I actually agree with the way that they are offering these items and their reasons for doing so. By putting them up at a specific time, setting limited quantities and putting a significant wait on re-releases, they are artificially creating a demand. I think it’s pretty brilliant and, whether anybody wants to admit it or not, will keep these lines going far longer than they otherwise would. There is an excitement and feeling of exclusivity that Mattel is creating that no amount of finding figures in the store or in stock at a standard online retailer can duplicate. This is the only place to get these figures and this is the only time. Well, for the regular prices, anyway.

The problem is that Mattel seems to have partnered with an incredibly inept vendor to sell their products. The failure is with the website offering the items, not Mattel itself (although Mattel is certainly still accountable for not correcting the issues or finding another vendor). Digital River is the company that is handling the sales and shipping for Mattel and by most accounts they are fucking up consistently and royally. It is one thing to wake up late and find Trap-Jaw sold out like I did. It is another thing entirely to sit down in front of your computer fifteen minutes prior to sale time and be denied the figure you were after due to a failure on the part of the website, which is the experience many people seem to be having.

Despite my bad experience, I did get my Venkman; he even stuck around for sale for a day or so. Apparently I could have just waited and saved myself all this hassle, but I thought if any of the Ghostbusters figures were going to sell out quickly it would be Bill Murray’s. Granted, I got charged twice by Digital River, but I called my bank and sorted it out pretty much immediately. Digital River responded to my e-mail about the extra charge like the assholes they are:

I just wanted to get that off of my chest. I don’t really expect Mattel to fix this situation. The only way we could get their attention is by taking away our dollars, and unless we can get a significant portion of HUGE toy nerds and douchebag scalpers to forgo their respective habits for several months that just isn’t going to happen. I know I’ll be right back in front of the computer in August when they put up their new Comic-Con exclusives. Fuckers.

Just to show there are no hard feelings, I’m going to spend all of next week talking about Mattel’s Ghostbusters Classics line. The articles are already written and are pretty nifty, if I do say so myself.

Enjoy your 4th of July weekend, check out Dork Droppings tomorrow for a special ID4 article and, above all, be safe.
Posted by Phantom Troublemaker at 7:58:00 PM