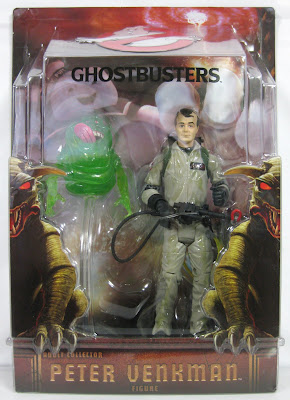 I was extremely close to not ordering this figure.
I don’t mean that I didn’t want a Peter Venkman to complete my Ghostbusters, just that I wasn’t too sure I wanted this Peter Venkman. As I said before, I wasn’t too thrilled about Egon being a “slimed” variant, but I got over it. I didn’t mind so much that Venkman was slimed, I just wasn’t too sure about his head sculpt and I definitely didn’t need another fucking Slimer. I’ll get into a lot more detail about my ideas of what the Ghostbusters’ accessories should have been in the next article. This time around, I was undecided because I’m pretty sure another Venkman will be offered in the future with no slime, a different head sculpt and likely a different pack-in. The question was whether or not I really wanted to wait.
I still wasn’t sure when I woke up on the morning of the 15th to get online for the sale. What ultimately made up my mind was Cool Toy Review’s freshly posted photo gallery of the actual retail figure. The head sculpt looked way better than the production pieces Matty had shown, and it wasn’t the first time this had happened.
So I got online and went through what I went through and he arrived last Thursday. Was it the right decision? Let’s see…

First Glance: Yeah, the head sculpt looks really good. It even got a compliment from Mrs. Troublemaker when I showed it to her. It isn’t Winston good, but it’s a close second. The Slimer looks stupid and I’m already certain I’m going to sell it on eBay. 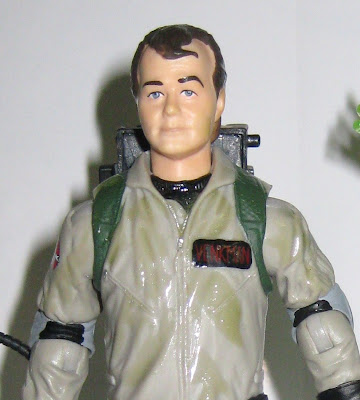 Sculpt: Like I said, they got it right. It really looks like Bill Murray with slimed hair. I like that they actually sculpted the hair differently than I presume the non-slimed variant will look, as opposed to Egon.

But the head isn’t the only part that stands out. Mattel actually sculpted Venkman to have untucked pants legs and gloves, unlike the other Ghostbusters. I’m glad they did this because it was going to be a big sticking point for me. Once I realized they were just reusing bodies for the other guys I got a little concerned about the sculpt for Mr. Murray’s character – he never wears his gear quite the same as the other guys and certainly not in the scene in the Sedgewick.

Good work on this one, Mattel – you did what needed to be done. 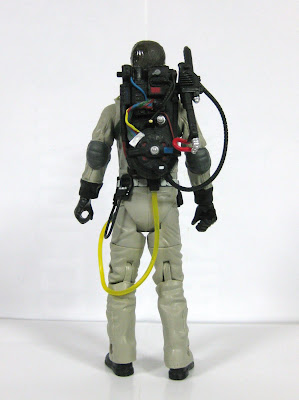 Design: All of the detailing is just as good as the other Ghostbusters. The proton pack, the nametag; everything. I even prefer Venkman’s slime deco to Egon’s. It is a bit clearer and shinier, just like in the movie. Granted, Egon’s slime must have come from a different scene and ghost, so it may well be more accurate than I’m thinking. 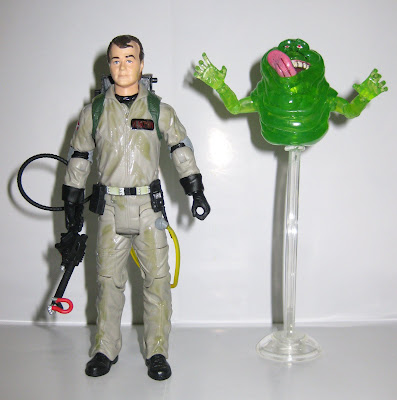 Accessories: Venkman comes with another fucking Slimer. While I do believe that this Venkman should have come with a Slimer (obviously) I think it should have been the other one and Egon should have come with something else. I don’t like the tongue on this one at all. Plus, there is absolutely no excuse for doubling up on accessories five fucking figures into the line when there are literally hundreds of ghosts to choose from. Of course, I’m fairly certain at this point that Mattel is going to decide they can get twenty bucks out of us for individual ghosts, too; so there you go. 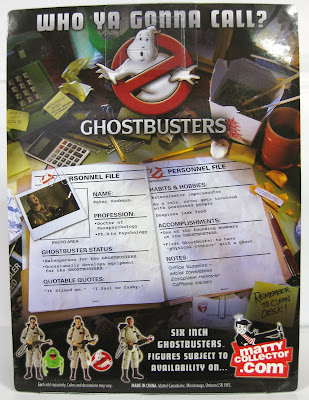 Packaging: : The standard Ghostbuster packaging, which would be just fine if the very first figure – the SDCC Egon – had not come in far superior resealable packaging. 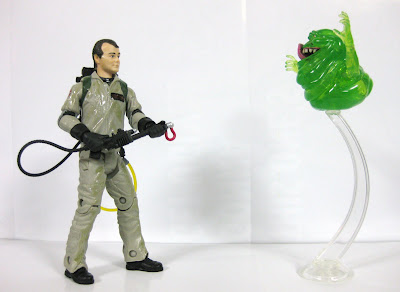 Overall: I am very glad I went ahead and ordered Venkman. This is one of the rare cases where I would have chosen a “battle damage” variant over a clean version. The scene is just too iconic. As far as I am concerned I am done with this line now. I’ve got all four Ghostbusters and Mattel has pretty much confirmed they won’t be doing an in-scale Ecto-1. I suppose I might get Louis Tully and Janine Melnitz if the figures look interesting enough (or drop the prices), but it’s going to take a lot form Mattel to make that happen. As a matter of fact, I’ll detail that in the upcoming post. For now, this Slimy Peter gets a: 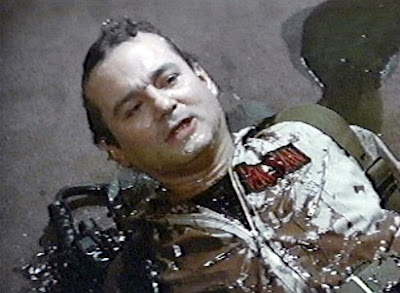 If you would like to use Slimy Peter as a band name, please contact me. I do vocals.