Toy Review – The Dead: Subject 2221 The Harbinger By Sideshow

As I have often said before, Sideshow Collectibles is the greatest toy company on the planet. Yeah, their stuff is getting a little pricey; but my latest experience with them is just another reason why they are worth it.

Throughout July Sideshow is revealing new products, new preorders and new licenses to hype the impending nerd orgy that is the San Diego Comic Convention. I’ve been keeping up with the announcements, and when I saw they were taking preorders for a new 1/6th scale Momaw Nadon (the Ithorian customer from Chalmun’s Cantina in the Mos Eisley space port on Tatooine. You know, from Star Wars? Fine – Hammerhead. So I’m a big nerd.) I had to check it out. I clicked the link, was taken to the Sideshow page and all of a sudden a little black woman popped up in the corner of my screen (she was not a VirtuaGirl) and asked me if I would like a Sideshow Collectibles gift card. I said, “Yes!”

And then I realized I needed to actually click on her or something because she wasn’t actually a real person talking to me.

So I clicked and was given a code to enter into their Secret Gift Card Deciphering Machine and ended up with a fifty dollar credit. Holy shit! Just for clicking a link! I poked around the items Sideshow had listed as gift card friendly and found something I had been wanting but was a little wary of.

I collect Sideshow’s zombie figures, collectively known as The Dead. As a matter of fact, my very first toy review was of their Babysitter figure. I’ve bought most of The Dead since The Babysitter as they’ve been offered with a few exceptions. I passed on the Street Prophet because I just didn’t like him that much. I also skipped on today’s Subject because it just seemed sort of… wrong. I get a little uncomfortable when things edge towards blasphemy.

But thanks to my gift card I could now purchase the Festering Father for a measly twenty bucks, so I put my qualms aside and ordered him. I mean, I can always just pretend he’s one of the boy-fucking variety and he deserved his horrible fate, right? I’m pretty sure God isn’t too worried about what happens to those guys. Of course, if you follow that logic I now have an action figure of a pedophile zombie in my house; which is infinitely more disturbing.

Back to my original and much more innocent point: Sideshow is great. The Harbinger arrived Monday morning and when I opened the box I found not only the figure, but a bunch of other stuff, too. 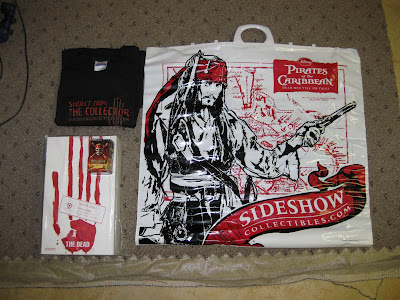 The fine folks at Sideshow had thrown in a SDCC 2010 swag bag; which is kind of neat, but then pretty awesome when you consider this is the first official art that I have seen for the new Pirates of the Caribbean movie. There was also a The Dead t-shirt, a Hot Toys figure of Jack Sparrow and yet another gift card, this one worth fifteen bucks! So with the simple click of a mouse button, I estimate that I ended up with about seventy dollars (after the price difference of this guy and shipping) worth of free loot. That’s kind of amazing.

So thanks, Sideshow! You guys are still the best. Here’s what I thought about your toy: 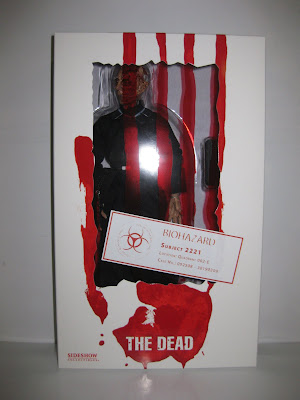 First Glance: I immediately noticed that this guy’s head is wrenched off to the side at a hideous angle. He’s creepy. 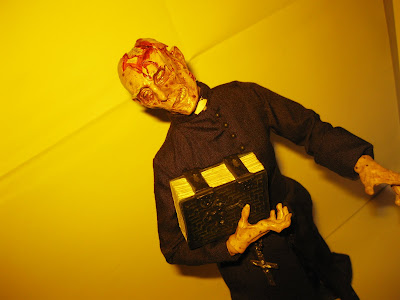 Sculpt: I don’t know the names of all the different Sideshow 1/6th scale bucks, but they are all great. Just the fact that they have several different sizes is pretty impressive. The Harbinger sports one of the slimmer models with all the standard articulation (in other words, more than you’ll ever need).

I think this new head sculpt looks kind of like a Matt Frewer zombie. I’m starting to wonder if the sculptors begin with a celebrity likeness and mutilate it until it’s just different enough to not get sued over. This is the second one that pretty closely resembles somebody (the other is Subject 805 – he looks like Kurtwood Smith). I need to look at the rest and see if it’s a trend.

So Father Frewer is pretty nasty. He has a massive head wound with pieces of skull hanging off. There is all kinds of nice rot and decomposition on the rest of his noggin. This is one of the better head sculpts I’ve seen on one of The Dead. 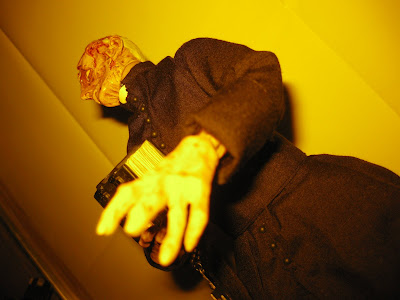 While the other figures have all had fully sculpted rotten zombie forearms that eliminate any wrist articulation, this one merely has nasty hands. He is articulated like a standard Sideshow release from the wrists up. I’m okay with either as long as it suits the needs of the figure. In Subject 2221’s case, he needs wrist movement so he can hold his bible. His giant, Book of Vampyr-looking bible. 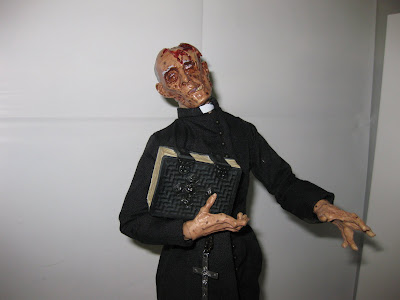 Design: The paint on his hands and head is solid. He looks a bit fresher than some of his fellow zombies, which seems much nastier. He has a lovely shade of salmon on his brain.
He comes outfitted in your standard priest get-up, but with a few extra touches that really are impressive. His collar actually works like a priest’s collar – there is a little white piece that slides into either side. It was out of place when I opened him, but I was able to correct it. His overcoat his fine wiring in the hanging panels that let you position them however you like. There is also some painted-on filth to help achieve that “died-in” look. He has no socks, which bothers me for some reason.

He also has a sash with a little rosary attached to it. 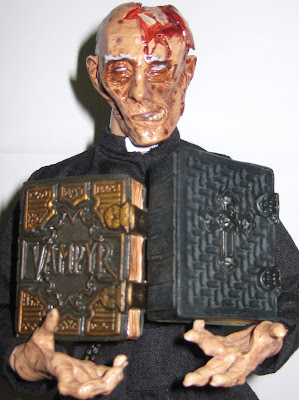 Accessories: Subject 2221 comes with a The Dead display stand and a giant bible that is clearly a repurposed Book of Vampyr from the Buffy line. Not that there’s anything wrong with that. It’s not like he should have come with a King James or a N.I.V. The bible has a big ol’ cross on the front instead of the word “Vampyr” and a different paint job. It looks just fine. 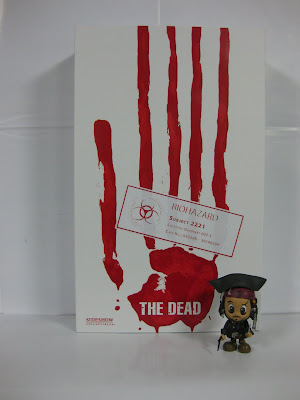 Packaging:  The Harbinger comes in the standard The Dead box: White window box with a bloody handprint and bloody spatters all over. Neat. And that's the little Jack Sparrow I got for free. 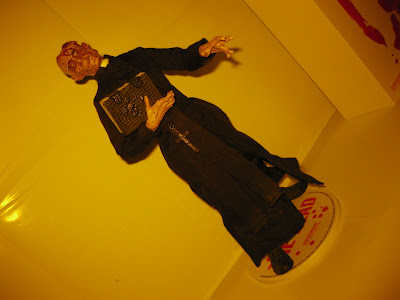 Overall: I’ve pretty much rationalized away my previous discomfort about this figure. When the zombie apocalypse happens, none will be spared (unless they know their Zombie Survival Guide like I do). Sideshow is proving that with the variety in their collection of undead. It’s not like they made a zombie priest and stopped there. That would have been weird. In the end, I like this guy and I’m glad I got him. One more for the army.

It’s been quite some time since Sideshow has released a new 1/6th scale The Dead figure. I was really expecting something for Comic-Con, but maybe we’ll get a Halloween release instead.
Posted by Phantom Troublemaker at 1:00:00 PM