While writing the Top Ten Concerts list, it occurred to me that there are several other shows that deserve recognition, albeit of a different kind. Then I realized that maybe it wasn’t fair to call out a show that was ruined by one band, so I’m just going to point out the worst or most disappointing bands I’ve ever seen live. Indie acts are not included because I don’t believe in shitting on the little guy. Well, most of the time. 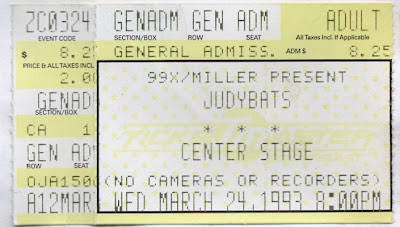 This was a show that I was subjected to because of female entanglement. Don’t get me wrong, she was a sweet girl; but listening to that fat turd in a poet shirt whine for an hour was just brutal. I think I was so grateful to be pulling down some trim at that point in my life I might have even claimed to enjoy it. Ugh. Sometimes I hate young me. 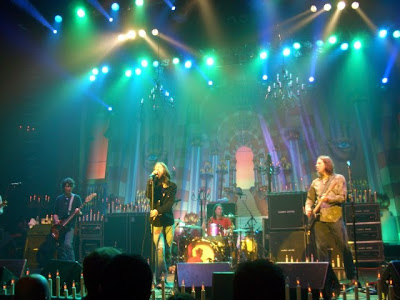 I dig The Black Crowes. They’re a solid rock band that can put together a good album. I don’t know Chris Robinson’s health status now, but when I saw the band play live – I’m pretty sure it was at a Music Midtown – he was so fucked up that it was an almost entirely instrumental set. Weak. 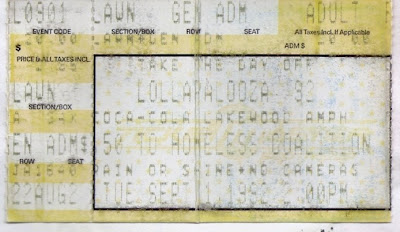 Weird to think that there was a time when it made sense for Primus to headline that group. I mean, they’re my favorite of all of those bands, but let’s be honest…

I am ambivalent on Dinosaur, Jr. as a band, but they were horrible live. Apparently their gimmick back then (and maybe now – I don’t know) was that they were the loudest band in the world. I believe it. That was one of the worst noises I have ever heard in my life. I had to go outside and wait for them to finish.

The Skatalites – (Skavoovee Tour [ugh – that name] w/ Selecter, The Toasters and Special Beat) The Masquerade – 1993

Not only was ska music popular back then, it was also perfectly acceptable to insert the actual word “ska” into anything related to it – Skatalites, Mephiskapheles, Skaboom! - you get the idea. I was guilty of it, too. I suggested “Skalonius Punk” as a band name. Again with the young me hate. Of course, I also suggested “Sub-Machine Nuns”; which I still think is great.

Skavoovee was a big ska festival that was already pretty boring. I think The Toasters went on after Selecter, who I don’t remember at all. What really sticks out, though, is the fact that me and several future members of The Irresponsibles literally fell asleep during The Skatellites set. I know they’re ska legends or whatever, but they were boring as fuck. 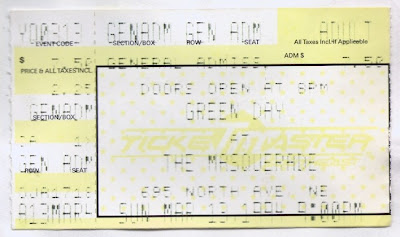 I hate The Offspring. I’ve never liked them, but this show didn’t do them any favors. The lineup was Pennywise, The Offspring and then Green Day. After Pennywise finished rocking everybody’s faces off, The Offspring were supposed to go on. They got lost or something and didn’t show up on time. Green Day graciously went ahead and played in their stead, and are still one of the tightest and most fun punk acts I’ve ever seen live.

The Offspring finally showed up during Green Day’s set, so we decided to stick around and watch them. I was there with dan d., Lance, Geoff and maybe a couple of other folks and I think I’m the only one who didn’t like The Offspring. At that point. Once that little shithole that looks like the shallow end of the Busey gene pool came out on stage and started whining I think some concerns started popping up amongst my buddies. When he literally stopped playing in the middle of a song no less than three times to bitch about his monitors, we all agreed it was time to leave. You’re in a fucking punk band, chuckles. Not only that, you showed up over four hours after you should’ve. Get over yourself.

Maybe he has now. For all I know, that douche has matured and become a great individual. I really don’t give a damn because The Offspring are still a shitty band. 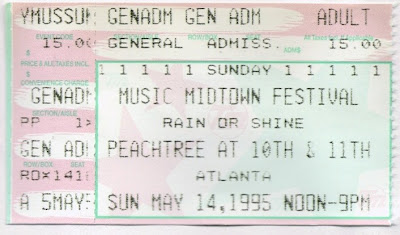 I think this was entirely my fault. My friends and I had heard what would probably amount to a music urban legend that R.E.M. occasionally went out and played small, low key gigs under the name “Five Chinese Brothers”. I was looking through Creative Loafing one morning and noticed that a band called Five Chinese Brothers was playing one of the secondary stages at Music Midtown that afternoon. I paged everybody, then waited for them to call back so I could tell them the cool news. I’m not the biggest R.E.M. fan in the world, but I like them well enough; and I can’t imagine there are a whole lot of music fans who would pass up the opportunity to see an act as big as they were at the time on a small stage at the park with only a few other people watching (until word got out that one of the biggest American bands in the world was playing!).

If you haven’t guessed by this point, not only were Five Chinese Brothers neither Chinese nor Brothers (there were five of them, though); they were also clearly not R.E.M. Or good. At all. 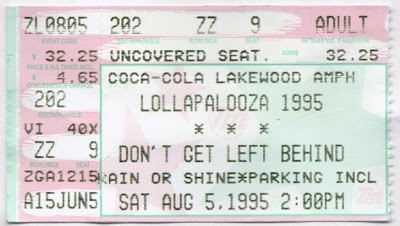 I think Hole has made some pretty rocking songs, particularly some off of Celebrity Skin. Obviously, Courtney Love is a complete wreck of a human being, but if she hadn’t killed Kurt Cobain we might never have gotten the Foo Fighters. I honestly don’t even know what I was doing at this Lollapalooza. Cypress Hill and Beck were the only real draws for me – you could see the Bosstones pretty much any time back then and I didn’t give a crap about any of the other bands (Elastica – who I still think are great – didn’t play Atlanta).

After making us all wait at least an hour, the Former Queen of Crunk finally stumbled on stage and caterwauled for about half an hour. She left and Sonic Youth went on. I’ve never really gotten Sonic Youth, but I wanted to give them a chance since they were so cool and all. Not so much. I still don’t get it. 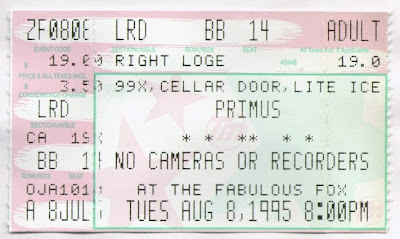 Wow. This was only four days later? Going to two shows in a month is a big deal to me now. I have to build up to that shit. And now that I’m looking at it, the Roots/Pharcyde/Ben Harper/Spearhead show from the other list was on the 6th! Holy shit was I hearty back then.

Another pretty big disappointment, though Les and the boys made up for it a few months later in Athens with a great show. The band just seemed off and dickish the whole night, like they didn’t want to be there. It might have had something to do with the cockstain that ran up on stage at one point and stole the hat right off of Les Claypool’s head. Seriously.

On a related note, I was telling a guy I used to be friends with about it a couple of years later. He jumps up and runs to his bedroom to get something. Out walks Stoner Craig wearing Les’ fucking hat. I can’t remember my exact reaction, but I think it hurt his feelings considerably. I didn’t hang out with him much after that. He was one of the nicest guys I’ve ever met, but he let the weed run his life. That and his desire for famous hats. 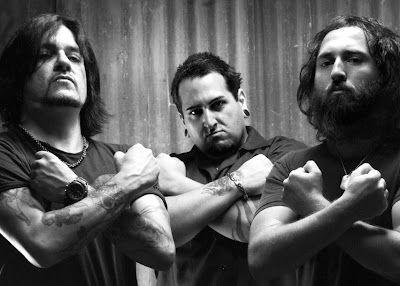 Also hugely disappointing. I went to this one alone because, unlike Less Than Jake, none of my friends were metalheads. Prong was number two behind Anthrax on my list of favorite metal bands until I went to this show and witnessed lead vocalist Tommy Victor lip-synching. I must have stood there with my jaw on the floor for a good five minutes. I still remember the disbelief clearly.

This was just a fucking mess. De La is one of my favorite bands of all time, up to and including Stakes Is High. I even really liked The Grind Date. If you love De La Soul like I do, though; DO NOT go see them live. They play about forty-five seconds of bits and pieces of old songs that have been so rearranged you can hardly recognize them (this is due to their stance that their old albums are “whack”) with the vocals way too loud and the music way too low. Also, they just kind of yelled everything the whole time. If you want proof, check out their live album. But don’t – seriously. It’s ironic that my big problem with their most recent album is that the vocals are too low and the music is too loud. Well, that and it sucks.

Also, I wanted a De La shirt something terrible. Unfortunately, De La Soul was the only national act the whole time I worked at the Masquerade that did not have t-shirts to sell. I asked one of their roadies about shirts and he said to come out to the parking lot after the show and they might have some. I did, but couldn’t find that guy and nobody else knew anything about shirts. It turns out that De La didn’t want to give the club a cut of the profits. You see, it is standard procedure for venues to take a cut of merchandise sales; anywhere from five to fifteen percent depending on various factors. De La Soul didn’t want to pay it, so no merch. Seems kind of dumb to me. I guarantee you not a lot of clubs just let them bring their stuff in without a cut. And I still don’t have a De La Soul t-shirt.

Most Awkward Show I Have Ever Attended: 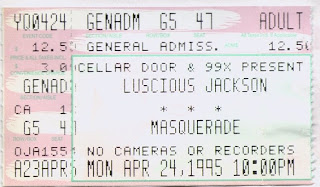 I went alone and had no fucking clue that Luscious Jackson were absolutely HUGE with lesbians. I was alone in my penis ownership that night. The band rocked a llama’s ass, though.
Posted by Phantom Troublemaker at 1:00:00 PM