Comic Book Wednesday: Batman - The Nipples of the Bat Part 1

As good as the Nolan Batman movies are, I still love the Burton ones – Batman and Batman Returns. They are great, but in different ways; I feel the same about the sixties TV show. I think that it’s just about appreciating different aspects of the same thing. Lots of people who read the dark, gritty Batman comics of today still enjoy the wacky stories from the Silver Age. 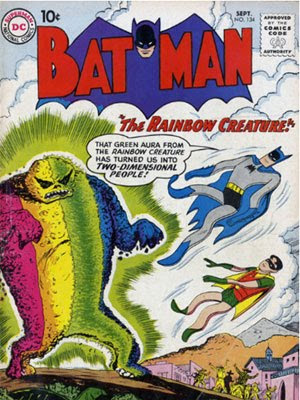 With all of that in mind, I decided it was time to revisit the Schumacher Batman movies.

I think we probably all agree that Schumacher’s garish, neon-colored, over-the-top, bat-nippled, sassy movies pretty much killed the franchise until Christopher Nolan’s more reality-based vision came along. Batman Forever alienated half of the audience that Burton’s films had built and Batman & Robin destroyed any remaining goodwill the loyal fanbase had left.

Recently, though, I had started to wonder: Were we too harsh? I seemed to recall liking Batman Forever well enough when I saw it in the theater. Well enough to dress like this for Halloween, anyway: 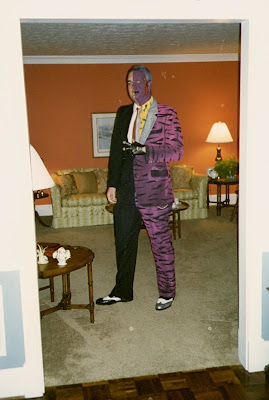 Was I not in the right frame of mind to accept a differing but still valid interpretation? Had I let the judgments of others cloud my ability to come to my own conclusions? Lord knows it’s happened before.

I decided it was high time to revisit the reviled films and give them a chance to redeem themselves to more mature and experienced eyes. Perhaps I would gain a new appreciation for the loud, colorful movies – particularly if I watched them with my two-and-a-half-year-old son, who loves all things Batman.

After a brief search, I found a DVD that includes both Burton entries as well as both Schumacher films for a reasonable ten dollars. That’s about all I wanted to spend for the two latter movies, so I got it and on my next day off sat down with an excited Lil’ Troublemaker to possibly rediscover two classic Bat-films. 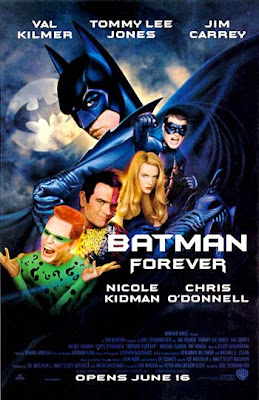 Starring Val Kilmer as Batman, Chris O’Donnell as Robin, Jim Carrey as The Riddler and Tommy Lee Jones as Two-Face; Forever suffered right out of the box for losing Michael Keaton as the titular character. As much as we had railed against Keaton when his name was attached to Burton’s 1989 movie, he won us all over. I still think he is the very best Batman/Bruce Wayne combo on film. Regardless, the third film had superstar power by way of Carrey – easily at the apex of his career in 1995 – and Jones; not to mention Nicole Kidman as the female love interest.

As stated above, I remember liking this one the first time around. Me and my buddies all quoted Jim Carrey non-stop for weeks afterwards. At some point, though, I really started hating it. I believe it was shortly after the VHS came out. I have a vague recollection of watching the first two, popping in Forever and noticing all of the differences and inadequacies in a way that I hadn’t when the viewings were separated by a few years.

It took me about five minutes to hate Batman Forever all over again, and Lil’ Troublemaker agreed. I had considered the possibility that the movies might be a little too scary for him (he hasn’t seen the Burton ones, nor will he until he’s a good bit older; the Schumacher ones aren’t as dark), but he just straight up didn’t like it. He recognized Batman, Riddler and Two-Face; he just wasn’t impressed by these iterations of the characters. He went back to his bedroom to play with “real Batmans” and left me alone to endure this crappy movie. 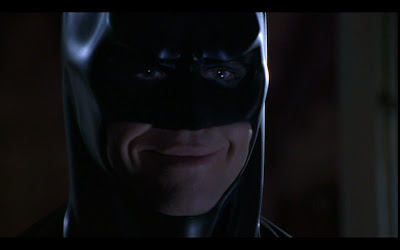 Val Kilmer is fucking terrible. I honestly believe they could have replaced him with a rutabaga and it wouldn’t have made a bit of difference. Normally I like the guy – I hate The Doors and Oliver Stone but I watched that movie because he was so compelling – but he just sucked ass in Batman Forever. He Costnered his way through the whole fucking thing, never once stopping to emote or even attempt to be interesting in any way.

Nicole Kidman is also fucking terrible. I don’t usually care for her anyway, but I believe her sole direction from Schumacher was, “You panties are absolutely dripping in this scene.” 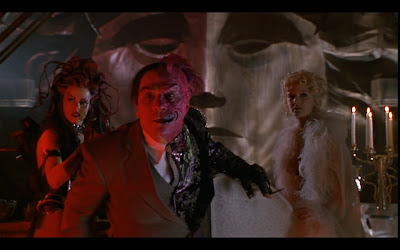 Tommy Lee Jones is fucking terrible. I really like him as an actor, but he played Two-Face like he was Cesar Romero playing the Joker playing Two-Face. He obviously had little familiarity with the character, and Schumacher was apparently in the same boat. He’s just silly and over-the-top (though that does make him fit in with the rest of the film) and you can’t make Harvey Dent work just by referring to yourself as “We” and aiming the left side of your face at the camera all the time. 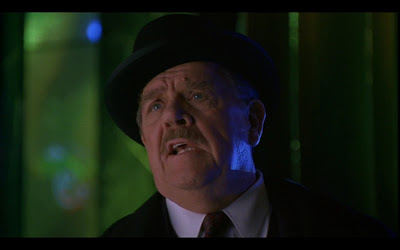 Other dishonorable mentions are Pat Hingle as Commissioner Gordon (though he’s Burton’s fault) and Joe Grifasi as the bank guard Two-Face takes hostage at the beginning. 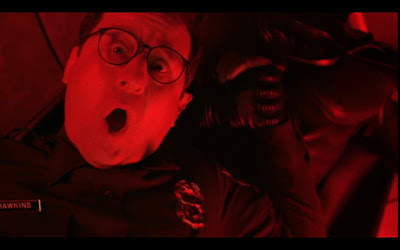 He is the first cue that this movie is really going to suck. No watchable movie features scenery-chewing that vomitous. That man’s execrable performance is the worst I’ve seen in a movie outside of THINGS.

Pretty much everything else about Batman Forever is terrible, too. Gotham looks like Las Vegas and every post-apocalyptic Tokyo you’ve ever seen somehow had sex and gave birth, which now that I’ve typed it, actually sounds pretty awesome. I guess if that’s what the production designer wrote down, I can see why it got approved. It just didn’t work out on screen. The whole look of the movie is just too different from that of the Burton films. It is clearly a different vision, one inspired by the old TV show; right down to the bizarre camera angles and ridiculous sets. 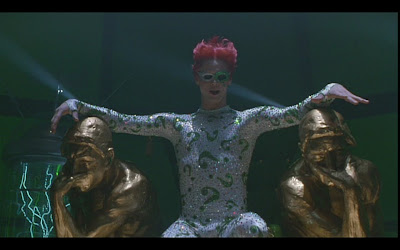 The costumes are a mixed bag. Yeah, Bat-nipples are unacceptable and Riddler’s hair is offensive throughout (was the visual of a grown man in green, question mark-covered tights just not enough to convince the audience they were looking at a lunatic?). Two-Face actually looked pretty cool, though. I thought so then and still do. The movie’s interpretation of The Flying Graysons’ costumes was well done, also. Riddler’s costume – pink hair aside – was pretty comic-accurate and I actually love the crazy, diamond-studded glittery one at the end. I can see that character becoming so impressed with himself after pulling off a grand scheme that he would sport that ensemble. And Sugar and Spice – Two-Face’s molls as played by Drew Barrymore and Debbie Mazar, respectively - look pretty awesome throughout the whole movie. 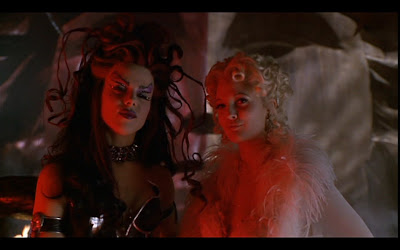 Back to the wretched. The story is far too convoluted. The character of Harvey Dent has no real impact, since his story is presented poorly and late in the movie. There is no sympathy for the man. As for Edward Nygma – there was no need for him to undergo a scientific mishap to become The Riddler. I think the obsession with Bruce Wayne was an interesting Hollywood-ization that actually moved things along (and made for one of the few truly funny scenes), but the whole idea of Riddler and Two-Face stealing Gotham’s brain waves for the purpose of getting high was just fucking dumb. Dick Grayson’s story arc works, but suffers from being overwhelmed by the thirty or so other stories and surrounded by terrible acting.

Some other points of craptasticness:

Riddler kills his boss and didn’t need to. 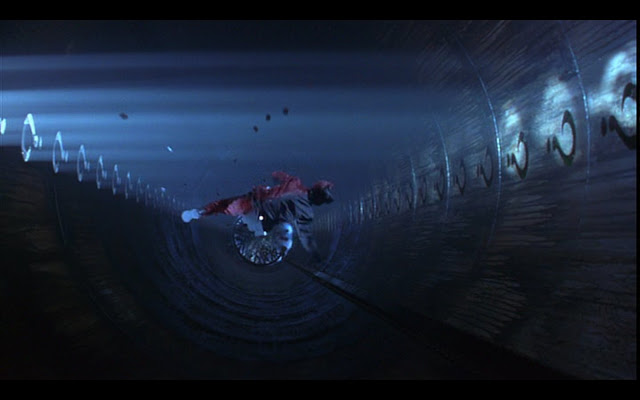 Batman basically kills Two-Face like it ain’t no thing but a chicken wing (granted, we’ve killed all the villains up to this point, but I hate it each time. Amazingly, Riddler survives Batman’s murderous rage.) 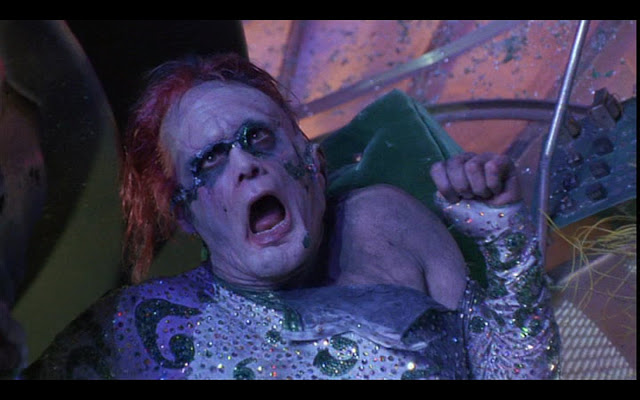 Nobody in Gotham seems to think anything of the giant, neon green clouds of evil moving from their city directly into the new, menacing island that has sprung up in the middle of Gotham Harbor. 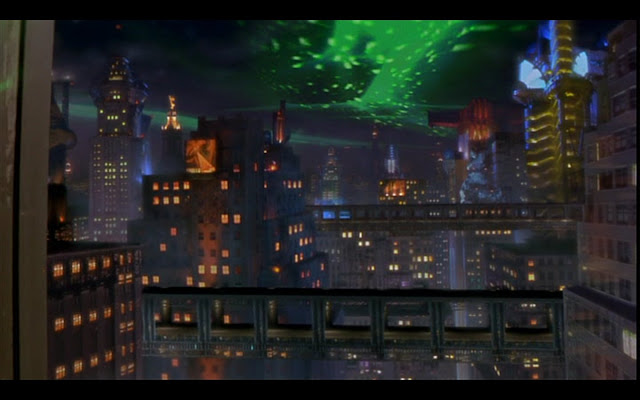 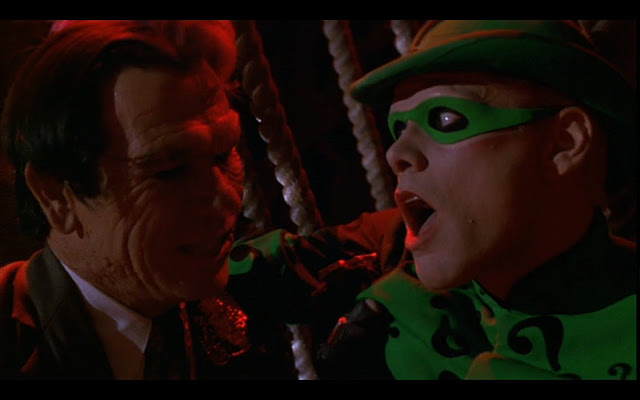 Riddler and Two-Face are clearly meant to be a couple – like a couple couple. There are just too many scenes where they are groping and falling all over each other. If this movie were a parody, that would be all fine and good. Actually, that would excuse a lot of the issues with Batman Forever. 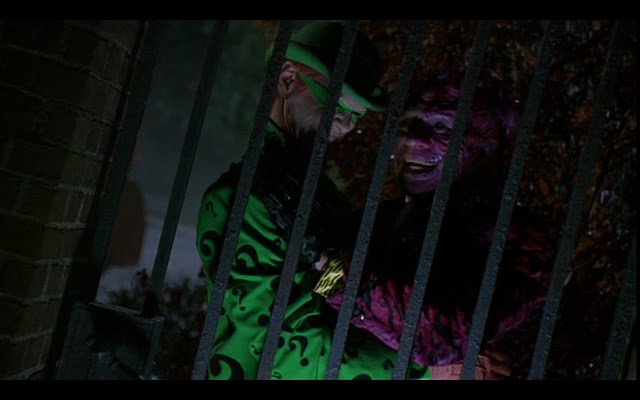 The list goes on and on. I just can’t. It’s terrible.

I will admit that Batman Forever has some good points beside the bit of creative costuming. I like Chris O’Donnell as Dick Grayson. I thought he represented the character as best he could. Jim Carrey was actually pretty great as The Riddler. My main complaints about that character come from problems with the script, not with Carrey’s performance. As a matter of fact, I would go so far as to say that I would love to see Carrey as Edward Nygma in Nolan’s third entry. I really think he has it in him, particularly if guided by a master of the craft.

Also, despite the fucking neon, I thought the Batmobile looked pretty cool in this one. I still have the toy: 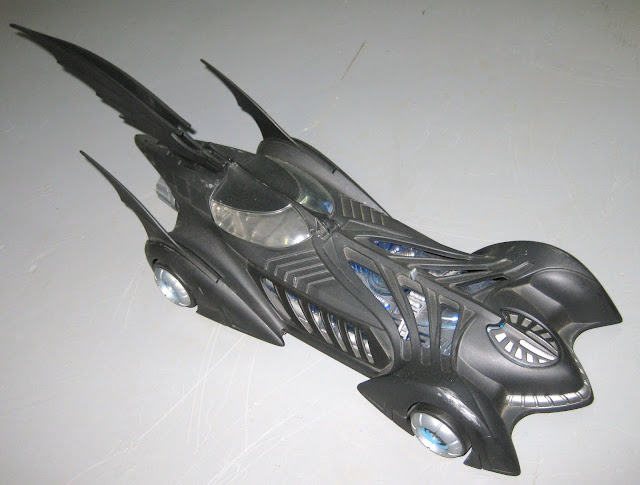 Overall, Batman Forever is a terrible travesty of a movie. I’m sure one day I’ll end up watching it again, but right now I’d rather staple my scrotum to a door and slam it. 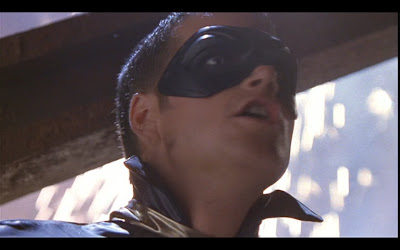 1 out of 5 Unnecessary Murders


This got way too long. I'll be back a little later with Nipples of the Bat Part 2: Batman & Robin!