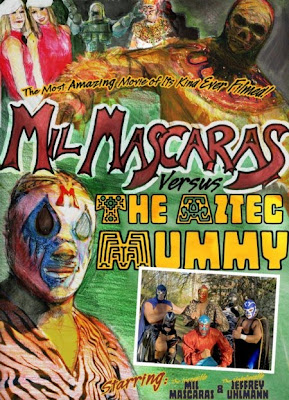 I needed more time to put together a post about the past weekend - the trip to the beach and the stop at Heroes Convention. Instead, I give you some Vintage Troublemaker about Mil Mascaras and Lita! Angry Matt co-stars! Plus, I'm super-fat here. This was about seventy pounds ago. I really shouldn't have been going out in public.


So me and Angry Matt went to the Plaza Theater last Tuesday to see Mil Mascaras Versus the Aztec Mummy (I absolutely detest this sort of thing, but I will be referring to this movie as “MMVAM” for the remainder of this post. No fucking way am I typing that out every time.) as hosted by Amy “WWE’s Lita” Dumas and, to a lesser extent, Shane Morton in a Blue Demon mask. 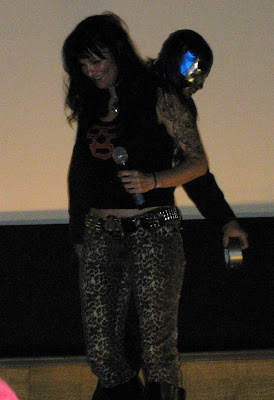 There were a lot of people down there under hoods, but most of them were just wearing t-shirts and shorts with them. Slackers. Amy/Lita had a couple of tables set up in the lobby with some of her personal lucha libre collection on display. I thought that was a nice touch. After downing some tequila with Shane, Amy and an unnamed masked rudo, I headed into the theater with Angry Matt in tow. He wouldn’t wear a mask because he don’t play that shit. 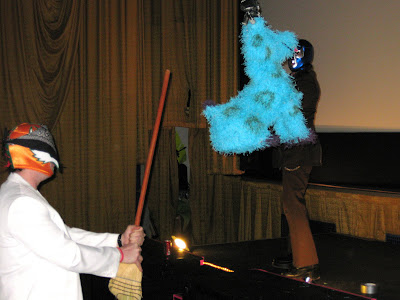 Shane brought a piñata up on stage to get everybody in the mood for some traditional Mexican fun. After a couple of kids and some chick took a whack at it, the only other masked guy in a suit went up and knocked the shit out of the thing. That blue donkey never had a chance. Crappy Mexican candy sprayed out across the theater. Well, across Shane’s feet, anyway.

Next Amy got up on stage and related the story of how she got started wrestling I n Mexico. It was pretty much a longer version of the story in her book. It was interesting to hear it told in person. After she wrapped up it was time for the movie.

You can find out more about it here!

I was surprised to find out that this is actually a recent movie, not one of the old-school lucha movies that I am so fond of. It is definitely in the same vein, though. MMVAM is an absurd, beautiful and riveting example of lucha cinema. It is the first lucha libre movie filmed in English, as well as the first to feature a homosexual rape scene. Seriously. Speaking of man-parts, MMVAM is also basically a 98-minute blowjob for Mil Mascaras – with extra ball-licking. The President of the United States sums up the tone of the film with this simple, yet powerful line: “Thank God for Mil Mascaras…” I will go one better – thank God for every single person involved in this movie. 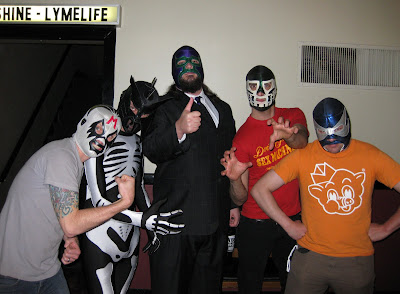 I have often dreamed of making a modern day lucha libre movie and now I know what it would have looked like. The director obviously loves the genre and handles everything exactly right. The movie doesn’t take itself too seriously, but it also doesn’t ever venture into parody. It is a loving tribute to the lucha films of yesterday. 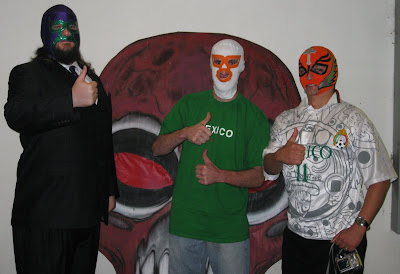 The plot goes like this: Mil Mascaras has to save the world from the Aztec Mummy. That’s really all you need to know. The plot doesn’t matter. What does matter is that everything about this movie is 100% AWESOME. From the wrestling scenes to the giant robot to the guy who looks like Forrest Whitaker’s brother that plays the sheriff or the chief of police or whatever. It all rules. The Aztec Mummy’s servants even look just like the Tall Man’s little demon Jawas from Phantasm. Mil drives a kickass car and is loved by all. I honestly think that every third line in the movie was referencing Mil Mascaras’ awesomeness. AND THEY ARE RIGHT! 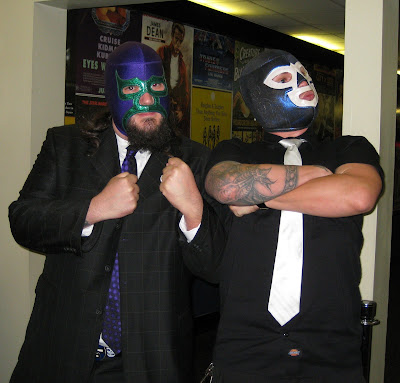 After the movie ended – and what an end it was – I got pictures with a bunch of the other folks in masks. One Blue Demon (There were a few) said something about putting his dick in my mouth. I still have no idea if he was drunk and trying to be funny, drunk and being serious or just a douchebag. I was so thrown by this I just said “HA! NO!” and told Angry Matt to take a picture. Even weirdo Blue Demon couldn’t ruin this experience. 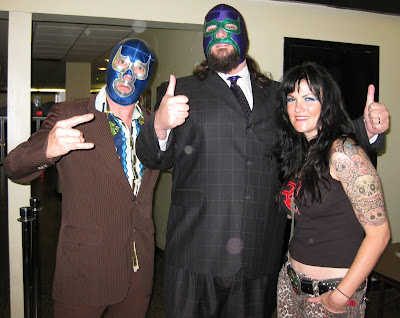 I cannot recommend this movie strongly enough. It is a masterpiece of modern camp.

Bizarro 5 out of 5 luchadors tripping on psychedelic mushrooms

I cannot believe how fucking fat I was. Also, this movie still has not been released on DVD for some reason.