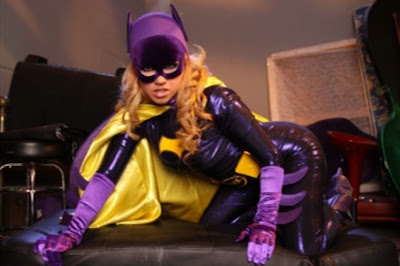 I first heard about this movie a couple of months ago on either Comics Alliance or Bleeding Cool. I knew without seeing the trailer that I would have to own it eventually. The old Adam West/Burt Ward Batman show is one of my favorite things of all time. I even splurged at Dragon*Con a couple of years ago (the Year of the Kidney Stone) to buy the bootleg DVD set the video vendors there always have because there are so many stupid fucking disputes over the rights that it will likely never see legitimate release.

I followed Batman XXX’s production closely: Bleeding Cool was providing updates every so often and everything I heard just made it sound more and more fun. The costume designer consulted with designers from the original show. Randy Spears – the gentleman portraying Cesar Romero’s Joker – grew a mustache just for the sake of accuracy. It just kept getting better – and then the trailer was released. It was mind-blowing:

Not only were the actors doing fairly spot-on imitations of the original show’s cast, the look of the thing was perfect. Axel Braun – the man behind the movie – was obviously a huge fan who knew his source material well. The colorful backgrounds, the odd camera angles, the music cues; everything in the trailer captured the tone of the show just perfectly. As the vague release date drew nearer I told Mrs. Troublemaker about it and we agreed that this film was a must-have.

I would check from time to time over the intervening weeks to see if anybody had this Holy Grail of Costumed Cockery. We even stopped at this seedy looking establishment while visiting my parents in North Carolina: 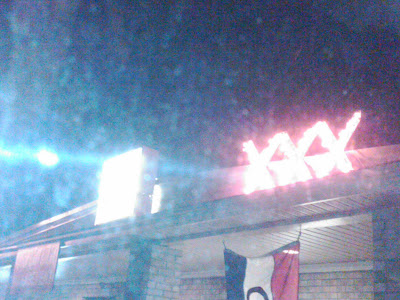 No dice. I don’t think that guy had anything newer than New Jackoff City.

I was beginning to lose hope. How the hell could I write a review for my lovely readers if I couldn’t even find a copy of the movie?

One magical night, though, when Mrs. Troublemaker and I happened to be in the amoral shithole that is Downtown Atlanta (see Fat Strippers, Punk Rock & B-Ball), we decided to stop in at one of the many porneries and try our luck. Why not? We had already had our minds soiled at the effervescent Clermont Lounge. Might as well knock out two sagging, veiny old titties with one stone. Or something.

And sure enough, that Starship had the Vivid Video of Masked Moneyshots that we had been looking for. I paid way too fucking much for it and we went home. We didn’t actually get to watch it until the other night – not exactly family-friendly viewing – but here’s my review: 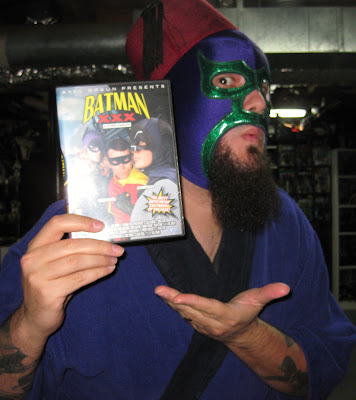 Things start out like any other episode of the 60’s-era Batman show. Bruce and Dick are playing a four-tiered variant of Chess and Dick is getting owned. Bruce’s fiancée walks in and tells the pair she is going shopping or something, then is promptly kidnapped by The Riddler. Seriously, like as soon as she leaves the room – right in the middle of fucking Stately Wayne Manor. But whatever. This is a porno, so go ahead and expect shit like that to happen a lot. If chicks didn’t get kidnapped, they would never get the chance to talk their captors into fucking them in the ass, right?

Which is exactly what happens.

Next up is a guy that looks exactly like Commissioner Gordon sitting next to a guy that sounds exactly like Chief O’Hara. The camera angles are all just like the show. The speech Gordon gives before calling Batman on the red phone is even the same; as is O’Hara’s response. It’s pretty astounding. So they pick up the red phone and tell Bruce (Batman) that the Riddler is at it again. Bruce tilts back the bust, hits the button and reveals the bat-poles as we go into the credits, which are a perfect porn version of the old show’s opening sequence.

Let me just say that so far this thing is uncanny. Dale DaBone and James Deen are spot-on as Bruce and Dick, respectively. Evan Stone is just amazing and has Frank Gorshin down pat – it could almost be Gorshin except for the fact that Stone looks like Bono. Honestly, aside from the Alfred boning Aunt Harriet comment, the only clue so far that this is anything but an extremely well done fan film is that Bruce’s fiancée is clearly a porn actress. Nobody else could have that stilted, vacuous delivery. But this really is turning out to be harmless, entertaining fun. 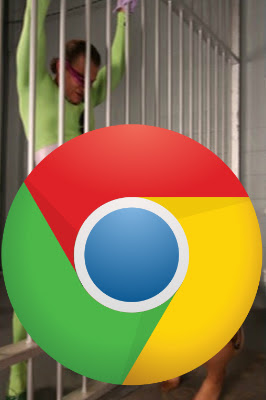 I suppose I could have switched over to the “No Fucking” version of the DVD at that point, but then I would have felt like kind of a pussy. And the last thing you want to feel like after seeing Evan Stone’s gigantic member is a vagina.

When next we see our heroes they are ascending the side of a building – with a turned camera, naturally – and run into the obligatory citizen leaning out the window.

I promise you I did not make that up. That is exactly what Robin says and it is awesome. Batmna then goes on:

Mr. Jeremy’s female companion then - through the use of clever hand signals and even cleverer dialogue – offers hand jobs to the Dynamic Duo.

They politely decline and continue about their business.

The next scene is inside what Batman refers to as a discotheque. Batman spots a lovely young lass at the bar and sidles up to her, ordering a grapefruit juice – freshly squeezed. I cannot tell you how amazing the parts of this movie that don’t revolve around BIG, THROBBING COCKS are.

The girl wants to dance, but instead of the Batusi, the Caped Crusader does some kind of weird thing where he strokes the ears on his cowl. Then he starts to feel the effects of… SPIKED GRAPEFRUIT JUICE! 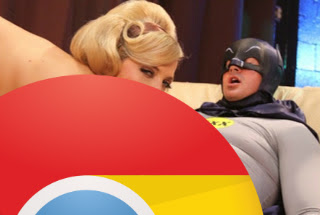 And then THE GIRL RAPES HIM, right in the middle of the disco. 1) Where did all the other patrons go? Are they just watching? Probably. 2)Where the fuck is Robin? Probably also just watching. Because he does that later on, too. Seriously.

Actually no, the Boy Wonder apparently wasn’t watching because he has showed up in the Commissioner’s office to report that he has no idea what the fuck happened to Batman. Gordon, sensing this is important, stops chatting with his daughter long enough to say words like “dastardly” and “insidious”. His daughter – Barbara Gordon (Lexi Belle – easily the hottest chick in the movie), also known as Batgirl! – overhears and makes haste to the office to team up with Robin. 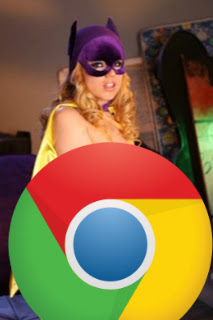 They, too, go climb a building. At some point Batgirl slips and falls back onto Robin’s BIG THROBBING COCK. Robin says something about keeping a better grip on the Bat-Pole… ER, ROPE! BAT-ROPE! and Batgirl keeps climbing. Fucking tease. 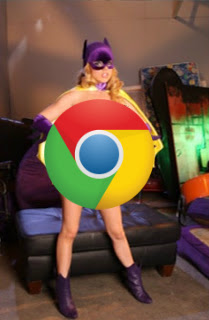 The interior of this building houses Randy Spears as Joker and Tori Black (a close second to Ms. Belle) as Catwoman. They each have appropriately attired hench-people with them. Conversation ensues that shows that both of them have watched A LOT of episodes of Batman. These two are probably the best in the movie and that is really saying something. I would go so far as to say Tori Black is the very best, simply because she has a very subtle role to play. It would have been easy just to put on the Catwoman costume and play it whorish, but she really knows Julie Newmar. It’s just super-impressive that she is able to stand out amongst all the other great performances (I cannot believe I am saying that about a fucking porno). 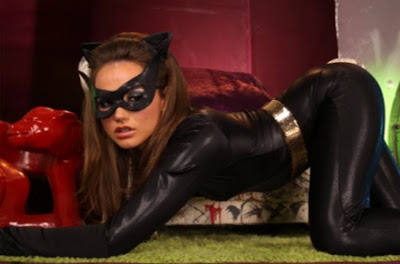 Robin and Batgirl are now watching the meeting from concealment. Joker and Catwoman conclude their business and Joker’s henchwomen ask if he would like a full body massage, by which they mean would he like to FUCK THE EVERLOVING SHIT OUT OF BOTH OF THEM.

And yes, he would.

And he is only white from the neck up. 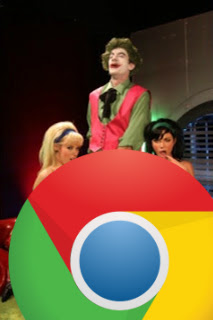 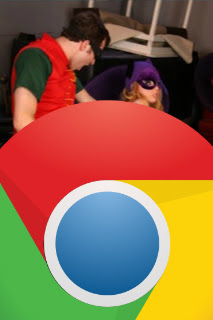 Unfortunately, a couple of henchmen bust in on them MID-FUCK and they get captured.

Batgirl is told to bring the now subdued bad guys to justice while the Dynamic Duo decide what to do with the admittedly helpful Feline Foe.

And if you guessed anything other than DOUBLE TEAM FUCK HER BRAINS OUT then you are clearly not the sharpest marital aid in the drawer. 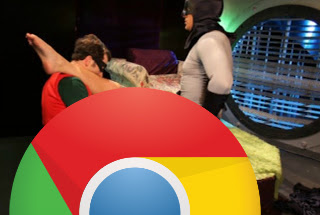 Honestly, this was kind of icky. And I don’t use that word lightly. Batman was a childhood favorite show of mine and now it’s kind of dirtied forever. I’m not ever going to be able to watch the original again without thinking about Adam West and Burt Ward porking everything with a set of titties. Granted, that’s apparently what was going on anyway, but I never needed to see it. Just know that if you decide to watch this, it’s going to stain your soul a little bit.