Toy Review: Masters of the Universe Classics Optikk by Mattel 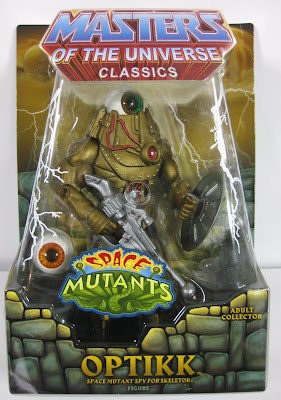 While my ability to say “no” to Mattel’s Masters of the Universe Classics offerings does indeed grow ever weaker, I couldn’t possibly skip Optikk. He’s the closest thing we’re likely to see to a Residents action figure.

Seriously, a big-ass robot with an eyeball for a head isn’t something any self-respecting nerd should pass up. I was never a fan of The New Adventures of He-Man reboot, but we did get some crazy-ass character designs out of it and I’m glad Mattel has decided to start making them. I’m expecting a wacky cyborg Skeletor any time now, but hopefully not before Leech.

Until that wonderful day when an updated figure of everyone’s favorite Eternian bloodsucker arrives at my door, I’ll still have this robot eyeball thing. 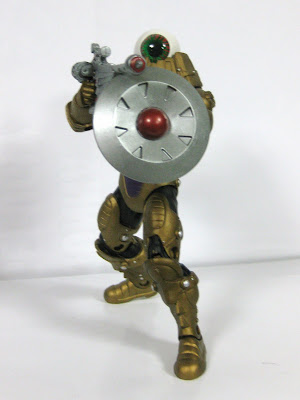 First Glance: This is one buff eyeball. I think Mattel is pretty clever to make the packaging as small as it is relative to the figures. Not only does it probably save them a little money, it makes the figures look absolutely HUGE when you see them. Aside from the giant eyeball, the first thing that caught my eye was the detailing on his torso. Nice wiring. 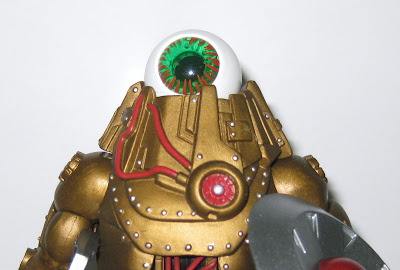 Sculpt: Optikk appears to share legs with Trap-Jaw, but I’m not sure since I don’t have him (yet). Chances are they could use these for Roboto and Mekanek, too. Whatever the case is, they look good under an eyeball. As a matter of fact, everything on Optikk looks pretty cool. There is an awful lot of detail sculpted into this guy. He is – like all MOTU Classics – very well articulated. His right ankle is a little looser than I’d like, but apparently I got lucky. Some folks can’t even get him to stand up. 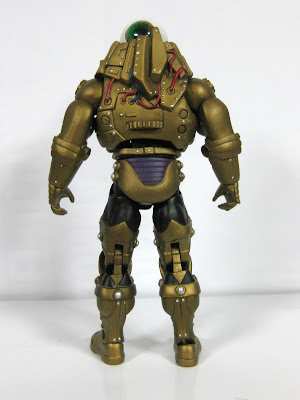 Design: This guy is not nearly as monochromatic as he looked in the pictures. I was honestly expecting a big, bronze body with a white orb featuring a painted-on iris. Not only is there a ton of detail and fine deco, the iris is a separate plastic piece in the eyeball. It is a translucent insert that somehow succeeds in giving Optikk more personality. 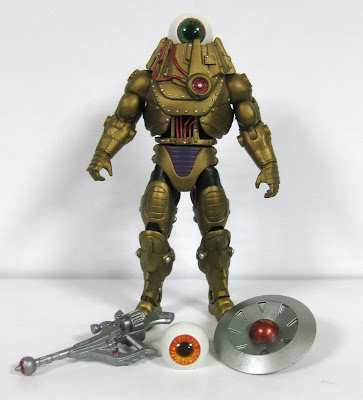 Accessories: Optikk comes packed with a shield, a gun and an extra eyeball/head. The shield is fairly bland but serves its purpose. The extra head is a nice surprise. While I prefer the green one that came on the figure, I have other plans for the extra… The laser rifle (which is called something specific that I can’t remember – cosmic ray blaster or something. Look at the package picture if you’re curious) is a nice-looking piece. It is very different from any other MOTU weapons, but fits in well.

Optikk holds all of his goodies just fine, which is more than I can say for some other toys. 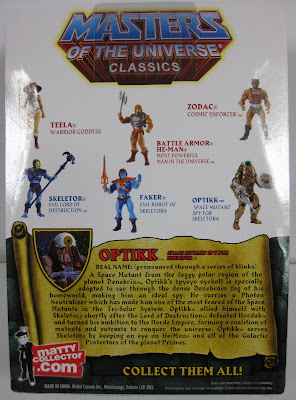 Packaging: The standard MOTU Classic blister that you open and throw away. It looks nice, but as an opener; I really don’t care unless it is resealable. Optikk doesn’t have any of the “mangled by packaging” problems that other figures have been experiencing lately.

Overall: Like I said, I wasn’t going to skip this guy anyway. He’s big and he’s an eyeball. What more could you want? I do like him even more than I thought I would and the extra eye really is a nice bonus.

Optikk is sold out on MattyCollector.com, but you can still snag one from BigBadToyStore, get ripped off by the douchebags on eBay or just wait for the inevitable reissue. If you like robots or eyeballs you should get him. He’s pretty damn nifty.