Ever since Mattel jacked the price up on the DC Universe Classics line I’ve been much more conservative with my buying. Three more dollars a figure makes a big difference when you’re looking at buying a whole series, so I’ve resigned myself to giving up on the build-a-figures for the most part.

Fortunately for me, the timing couldn’t be better. There hasn’t been a series since the Kilowog BAF that I have wanted more than half of, and there hasn’t been a BAF I’ve wanted since him, either. Mattel has been putting out waves somewhat more reliably lately, so I’ll give them credit for that. I’m also not going to let my current clash with Mattycollector color this review, because that’s just not how I roll.

The DCUC wave that is in stores right now doesn’t have much to offer for me, personally. Here’s the breakdown:

90’s-era Superboy – I didn’t care about him in the 90’s and I certainly don’t now. I would have bought a Connor Kent if he had a Krypto pack-in, though.

Donna Troy – I’m honestly not even sure what her story is. Doesn’t she normally have some kind of sparkly get-up? In the “would’ve” category, I could see buying a modern-era Wonder Girl.

Cyclotron – Really? I get the whole Super Powers thing, but this guy just sucks. I am anxiously awaiting Samurai, Apache Chief and an old-school Black Lightning.

Negative Man – I just can’t get into Doom Patrol. I feel like it should be right up my alley, but I’ve tried and I just can’t do it. I really dig this figure, particularly the variant, but not enough to just pick it up without character or emotional attachment.

Cheetah – I’ll buy one of the modern versions if I see one, but I’m not going to go crazy looking for it.

And that’s basically how I felt about Blue Devil and Blue Beetle. I dig Blue Devil because he’s a supernatural character and looks like he should be advertising German whiskey, but he’s not a favorite or anything. The Jaime Reyes Blue Beetle is more of a favorite of Lil’ Troublemaker’s, but I think this figure is an important landmark for the DCUC line and it looks great.

As for this wave’s build-a-figure, Trigon, I only know him from the Teen Titans cartoon. While I do think he is an awesome-looking character – and looks even more like he should be shilling European liquors than Blue Devil:

I’m not going to shell out sixty extra bucks just to get him.

It’s funny – at eight bucks apiece anybody could justify buying a whole series of superhero toys just to build any old character they threw at us. At ten, if you like at least half the series you can probably justify it. At twelve, I needed to really want the build-a-figure and like more than half of the series. Now, at fifteen dollars per figure, that build-a-figure better be a must-have and there really can’t be more than one stinker in the series for me to justify tracking down and paying for the whole set. It’s because of Chemo and Kilowog that I have a Guardian and that awful fucking Shark figure junking up my shelf. I should put ‘em up on eBay just to see what I get. Somebody out there must want them, right? Hell, I’ve got a gay-deco Aquaman I bought on clearance, too. 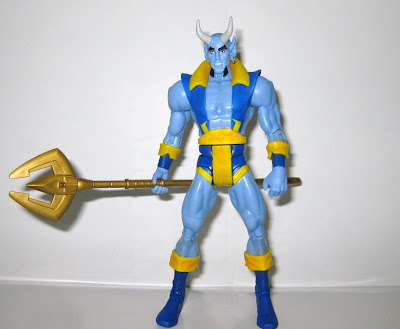 First Glance: The very first thing I noticed was the lazy job they did on Blue Devil’s earring. Rather than being a sculpted loop, it’s a disk with the edges painted. Boo. Other than that he looks pretty great. 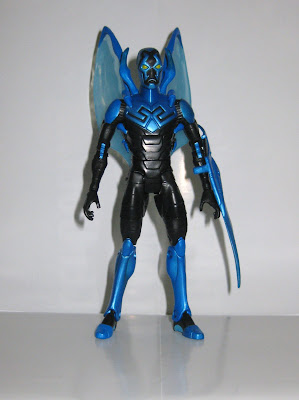 Blue Beetle looks awesome in his package (which I have no pictures of because I forgot to take any before opening these guys). This is a figure that looks so cool I would’ve been tempted to buy him even if I hadn’t known who he was.

I dig the little buttons that come with the figures now. I don’t know what the hell to do with them, but they are neat-o.As to why that's Ted Kord and not Jaime Reyes, I don't know. 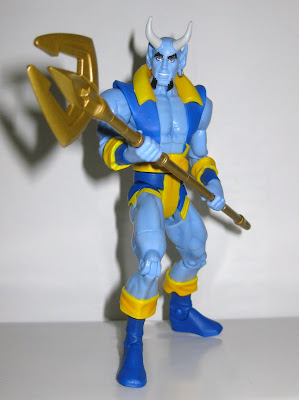 Sculpt: Blue Devil looks really cool. He has the standard DCUC articulation. His face looks great. My problem is that damned earring. If this was a 3 ¾ inch figure I could understand the solid piece, but on a six inch scale I just expect better. Everything else is good. His hands can hold his trident in any way you like and his shirt/vest thing looks like it should look. 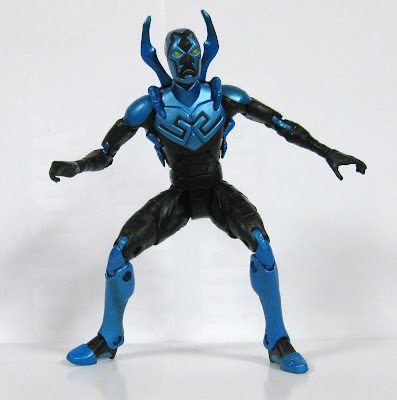 As for Blue Beetle, the first reason I feel he is such a landmark is that he is the first DCUC figure to feature double joints. We’ve seen them used successfully in Hasbro’s lines for quite some time now, and Mattel has finally caught up. The thing is, I kind of like the aesthetics of the single-jointed DCUC figures. They look more natural than the weird bulges you get with a lot of the double-jointed articulation. That being said, Blue Beetle was a good test subject. With his armor design, the extra joint isn’t very noticeable. Another reason Mr. Reyes is interesting is that he is an entirely new sculpt who really can’t be farmed out to anybody else that I can think of. This is fairly unusual for Mattel. 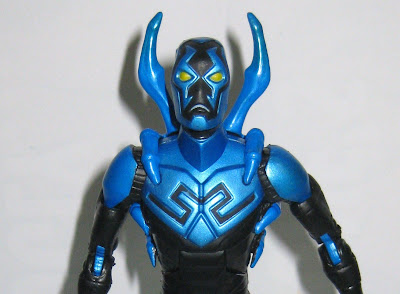 Design: Blue Beetle’s paint is very solid. There are a lot of opportunities on this guy for overlaps, but mine looks really good. I have also read that a lot of people’s Beetles are suffering from stuck joint syndrome – mine is great. All of his joints are entirely mobile. 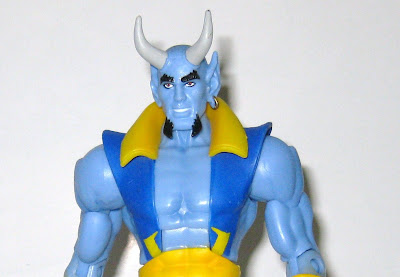 Blue Devil has a few parts that would have been nicer as sculpted rather than painted on – most noticeably his belt/diaper/prongy thing. Overall, though, he looks fairly good. Apparently this whole series is having sticky joint issues, but both of my figures function just fine. 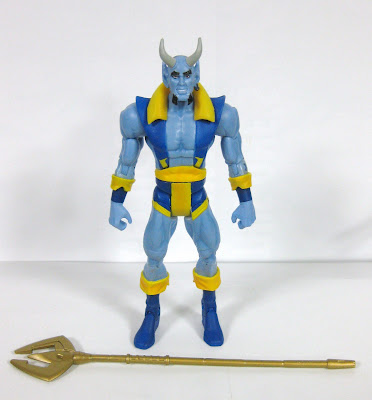 Accessories: Blue Devil comes with his pitchfork. It looks like it should look. 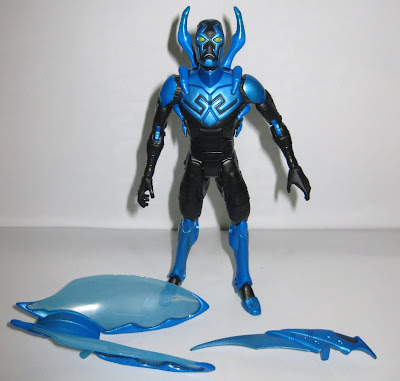 Blue Beetle includes a clip-on arm weapon (a blade of some sort) and extended wings that plug into his back. The wings look great, but I don’t like the fact that they leave three uncovered holes on the figure’s back when you remove them. I plan to display Beetle sans-wings and would have liked it if Mattel had included some sort of cover piece for when they’re not there. The blade thing is a piece of crap. It is sculpted and painted very nicely, but it is made of a plastic so soft it might as well be rubber and just sort of looks like shit if you can even manage to get it to stay put on the figure’s arm. A plug-in piece to replace one of the hands would have been a much better idea.

Packaging: Your standard DCUC blister pack. I really love the 75th Anniversary design on these new series. They are very eye-catching and make the new figures stand out on the pegs and shelves. I neglected to take pictures of mine before I opened them, but please enjoy the ones I lifted from another site. 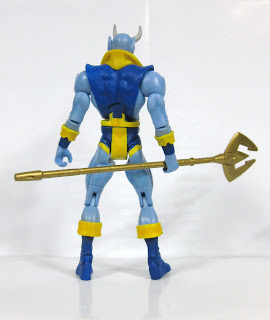 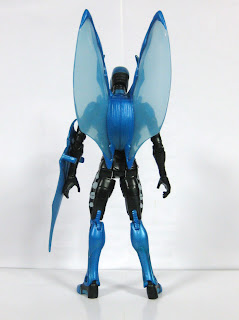 Overall: I’m pretty happy with these guys. They both live up to my expectations, with Blue Beetle surpassing them slightly despite his shitty weapon and ugly back holes. I wouldn’t have displayed him with the blade thing, anyway.

These two officially mark the point where I have run out of space on my DCUC shelf. I’m going to have to figure out a way to expand. That last Superman I got would have done it, but I hung him from the ceiling. I guess I’ll have to separate the heroes and villains. I’ll be interested to see how they split up. I have a feeling I have a lot more good guys for some reason.

Posted by Phantom Troublemaker at 2:58:00 PM