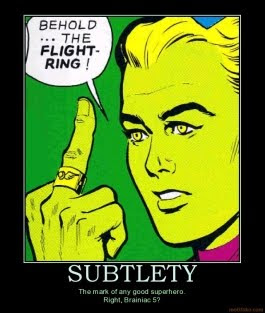 I thought about doing another rundown of how I’m enjoying comics right now, but I feel more like having a discussion than just writing down opinions, and that doesn’t make for a good article.

Instead, here are the top ten moments in comic books that I have read that made me say, “Holy shit!” either literally or figuratively. As with everything on this blog, I am only including stuff I have actually read, so if you can’t believe that I left out something like the Legion of Superheroes banding together to destroy the evil entity known as Applesauce Lad by having an orgy that produced Brainiac 23, who made an Ad Infinitum Positronic Reality Collider gun that could only be fired with Bruce Wayne’s hand which they had to steal from the Intergalactic Museum of Misanthropes Who Surprised Us All By Being Self-Sacrificing Heroes In Masks then you can just suck it. I don’t read Legion of Superheroes. But feel free to leave your own favorite “Holy shits!” in the comments section.Oh, and sorry some of these are pics and not scans. I just didn't feel like scanning all damn morning. 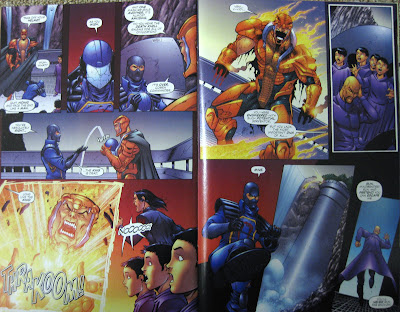 While there may be a lot of confusion and just a little inconsistency in Image/DDP’s iterations of the GI Joe story, I thought most of it was pretty fucking awesome. One of the characters that benefitted the most from the company’s handling of the license was Cobra Commander. The Commander was always depicted as a buffoon in the animated series, while Larry Hama’s Marvel comics were slightly more respectful. There he was definitely a villain, but only slightly more competent. Josh Blaylock’s portrayal of Cobra’s August leader was a cold, calculating strategist who really had the will, the brain and the balls to take over the free world. Yeah, he still had the occasional outburst; but this was guy that you felt could truly command the loyalty and respect of an entire army of followers.

Serpentor was reintroduced into the comics (which were done as a direct continuation of Marvel’s continuity) shortly before DDP started producing them and he usurped the Commander’s rule. Eventually the two had a confrontation. Serpentor, thinking he had the upper hand on the captured Commander, demanded he remove his helmet and show obeisance. The Commander removed his outer helmet and gave it to Serpentor – who got blown right the fuck up by the booby-trapped headwear. After gloating that Serpentor was missing the most crucial DNA of all - his - Cobra Commander delivered a kick that sent the Cobra Emperor hurtling off of the parapet where the scene was taking place. It was fucking awesome and is still one of my favorite moments from the Image/DDP run. 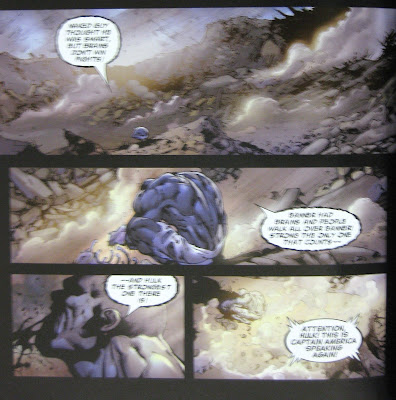 While Hulk was clearly an even more visceral creature in the Ultimate universe, I’m not sure anybody was prepared for his solution to destroying the near-indestructible entity responsible for the alien invasion of Earth. I have seen this moment maligned in places all over the internet, but I think it is one of the instances where the Ultimate universe truly set itself apart from the Marvel status quo. 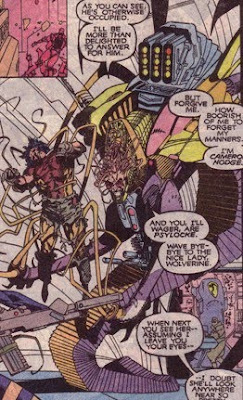 It was truly a shock when it turned out that classic X-nemesis Cameron Hodge was the villain behind chaos in the mutant state of Genosha. Archangel had decapitated Hodge after his old college roommate murdered his girlfriend, so it was kind of a shock that Hodge was still alive; let alone masterminding X-Title crossover events. It turns out Hodge had made a deal with the demon N’Astirh to become immortal, so when Mr. Worhtington III cut off his head, he survived and – like any normal person would do – had it attached to a giant cybernetic spider-snake body. This series ended with Hodge being beheaded yet again and then buried alive by Rictor. Naturally, he came back a couple of years later. 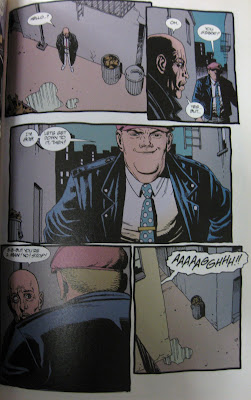 Preacher was a comic that was full of mind-blowing moments of unadulterated horror. Things were depicted over the course of Garth Ennis and Steve Dillon’s epic series that warped me for life – Arseface, incest, Jesus’ ancestor being an inbred simpleton. But the series’ main antagonist getting butt-raped by a male sexual investigator was just too much. As a male, that is a particularly terrifying idea and one that created some small amount of sympathy for a guy that had historically been shown to be a giant douchebag. Of course, later on we find out he liked it. 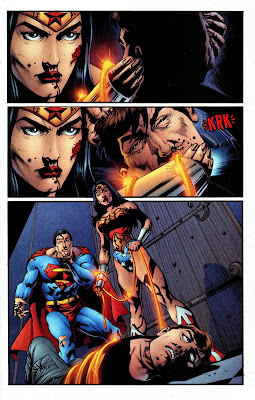 Yeah, Maxwell Lord may be back now; but that doesn’t change the fact that everyone’s favorite Amazonian princess made the conscious decision to murder him in cold blood. I loved it and felt she did what had to be done, but it was a powerful and moving event. Particularly interesting was Batman’s reaction. 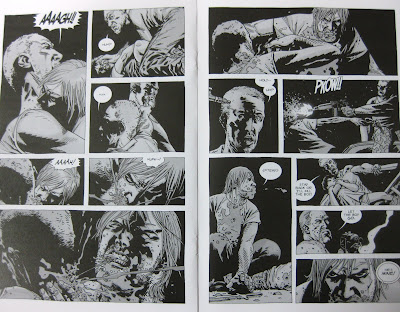 While Robert Kirkman’s The Walking Dead is a visceral and gritty comic book, it is almost never gratuitous. One of the more controversial events in the entire series is the depiction of the attempted rape of the main character’s ten-year-old son by one of a wandering band of robbers. In one of the most tense situations I have ever seen in comics, we see the threat, Rick’s growing horror, his escape from his captor and his brutal – yet very human – assault on his son’s would-be attacker. Having no other option, he literally tears the man’s throat out with his teeth. While his son watches. 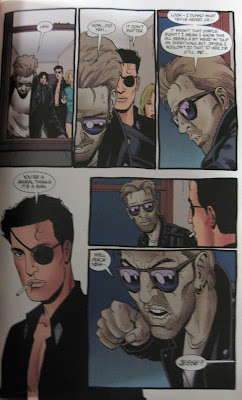 I really didn’t want to pick more than one moment from any single series, but this one almost literally broke my heart. Ennis set us all up to love the alcoholic shitbag vampire and believe that he was our hero – Jesse Custer’s – best friend in the whole world. And then he shit all over us.

3 – Bruce Wayne takes the mantle of the bat back from Jean Paul-Valley
Batman: Legends of the Dark Knight #63 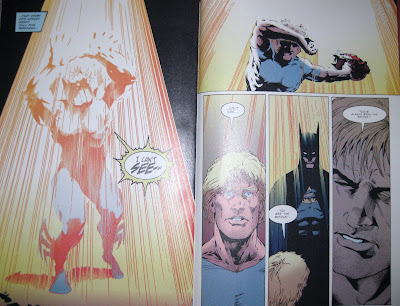 This is a moment that was not unexpected or particularly shocking. It gets a “Holy shit” simply out of sheer awesomeness and anticipation. You might think that the catalyst that led to this event – Bane breaking Bruce Wayne’s back – would make this list, but we all knew that was coming. DC hyped it for months before it actually happened. We just didn’t necessarily believe them. And then it happened. For real, yo. Bruce Wayne exited stage left and chose the vigilante Azrael – Jean Paul-Valley – as his replacement. Over time, it became more and more apparent that Valley wasn’t going to last. He was becoming less Batman-like with each passing day and more douche-like. The new Batman was becoming more violent and vindictive, and the extended Bat-Family were starting to get really sick of his shit.

Just as things were getting their ugliest and Valley was going over the deep end, the real Batman returned and out-fought, outsmarted and out-classed Valley in an epic confrontation that raged throughout all of Wayne Manor and the Batcave, finally ending when Bruce Wayne used Valley's own overly-technological suit against him. I was literally exhausted after reading this issue. 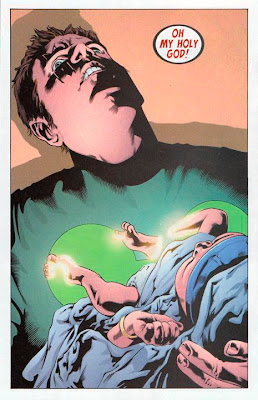 When built up in just the right way, a comic book birth can be an excellent storytelling event. Siryn’s relationship with Multiple Man had been evolving in the pages of Peter David’s signature series (to me, anyway) for quite some time. One thing led to another and Sean Cassidy’s little girl ended up preggers. The sort-of-couple decided to stick together and do the parent thing. The wee lad was born, and when Madrox stepped forward and held his son for the first time – he absorbed him like one of his duplicates. The center of Theresa Cassidy’s life for the past nine months was gone in an instant. It later turned out that the baby was somehow a dupe, but it really doesn’t change anything. That girl still lost her child.

1 – Joker shows Jim Gordon nude picture of his daughter, whom Joker had just shot through the spine
Batman: The Killing Joke 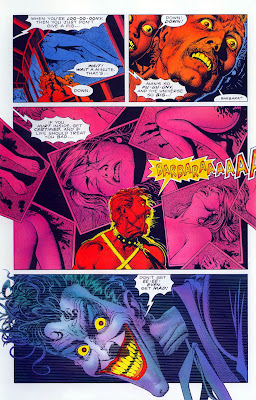 Yes, it was fucked up that Joker shot Barbara Gordon. The part that really made me ill the first time I read it, though (and still does to this day), is the scene where James Gordon is tied up nude and accompanied by midgets in bondage gear through an amusement park ride featuring naked pictures of his daughter on the floor of their home, writhing in pain from the bullet wound that has severed her spine. This is also a major event because it appears to have broken comics’ golden rule that nothing ever really changes. Barbara Gordon is in a wheelchair to this day. In a world where nobody stays dead or injured for long, Alan Moore and Brian Bolland’s collaborative altering of Barbara Gordon’s life has gone untouched.

We have a lot of comic book writers today that tell shocking stories and depict graphic events. Much the same way that many horror movies of today resort to using graphic images to scare you as opposed to storytelling. Don’t get me wrong, I love that stuff. But the events of the Killing Joke are so much more real and terrifying than any number of absurd mutilations or drawn-out dismemberments. There is art to both methods, but I’m afraid the more subtle horror Moore and Bolland display with this legendary piece is falling by the wayside. We’re all immune to graphic violence and torture porn at this point, but I can’t imagine such brutal assaults on the soul will ever be unaffecting. People get shot in comics all the time, even back in the 80’s. I still can’t believe where this book went afterwards, though.
Posted by Phantom Troublemaker at 1:00:00 PM