He-Man Versus Superman: The Comic Book 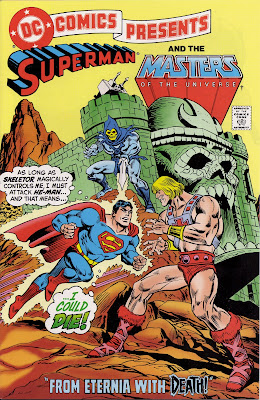 This was originally part of yesterday's article since it is included with the set, but I liked this review so much I thought I could get away with splitting them up and making two days' worth of content. Plus, it works for my new "Comics on Wednesday" thing.

This thing is crazy as hell and doesn’t make a lick of sense.


Prince Adam is strong as fuck, picking up training robots and tying weights in knots and stuff, but nobody knows he’s He-Man. I guess because nobody on Eternia believes He-Man would ever wear fuchsia suspender panties with a blue pirate shirt. Thankfully, Orko is nowhere to be found in this comic. 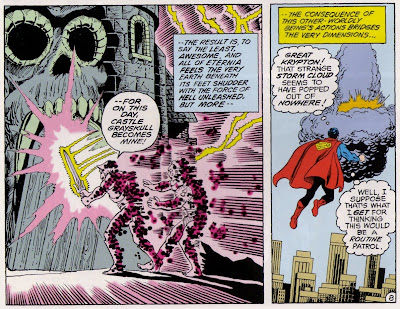 Superman – on a routine patrol through Metropolis – spots a bizarre cloud in the sky and just flies right into it without being cautious or anything. I mean, he’s Superman, right? Fuck that cloud! Except that this magical cloud was created by Skeletor whacking the gate of Castle Greyskull with his half of the Power Sword. Clearly Skeletor should have known that a magic cloud that bridges dimensions and kidnaps flying men in red under(over)pants would result from his thoughtless deed.

Did I mention that the cloud is magic? Good. Because the comic does, too. In one of eight-hundred-and sixty-two references to Superman’s vulnerability to magic.

Skeletor assumes that Supes is some sort of defender sent by Grayskull to whoop his ass, then Superman is surprised when Skeletor tries to slice him open with the Power Sword: 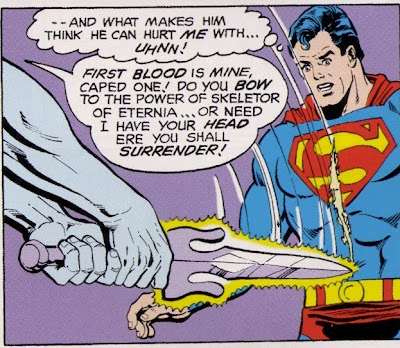 I can’t decide if this is supreme arrogance or abject ignorance on Superman’s part. He doesn’t know why anybody would think a sword would work on him. Hey, Kal-El; sorry to burst your bubble, champ, but maybe not everybody in the universe has heard of you. Or maybe there’s some kryptonite in that sword. Or maybe it’s made of some crazy new metal that can cut your face off. Did you ever think of that, you cocky asshole? I mean, you did just get straight up jacked by a fucking cloud – maybe a little caution would be in order after that?

Anyway, Skeletor figures out that this new guy is susceptible to magic (since Skeletor is roughly eleventy-billion times smarter than Superman, which still only qualifies him as not-quite-a-moron) and blasts the fuck out of him.

Meanwhile, Prince Adam, dressed like a reject from a Madonna video (or for you younger folks a Lady Gaga video) is starting shit in a pub with one of the local shitkickers. Like, really provoking this guy. I like to think this is how Adam spends his free time. He goes to random pubs, finds some sorry working class slob, starts some shit, lures the guy outside into some alley, then turns into He-Man and fucking pulverizes him.

That’s kind of what this comic leads me to believe, anyway.

Luckily for Mr. Blue-Collar Eternian, something signals Prince Douchebag that trouble is afoot. He meets up with the sorceress (who looks exactly like Teela and lives in a cave like some kind of homeless person) and she tells him that Skeletor is attacking Castle Greyskull. Again. Adam sighs, turns himself into He-Man and Cringer into Battle Cat and takes off.

He-Man arrives as Superman is getting blasted out of the air. They decide to have a Super-Strong-Dude Team-Up and take out Skeletor, but Skeletor uses his MAGIC Power Sword to take control of Superman and make him fight He-Man for like, two panels. 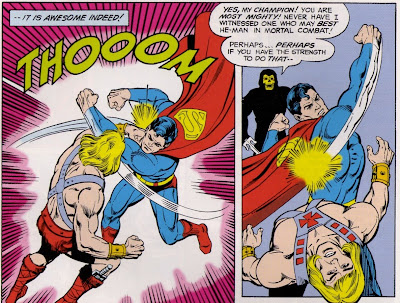 Then Superman uses his Silver Age Super “turn the ground into some kind of restraining device” Vision to trap Skeletor before the Master of Evil can make him bust into Castle Grayskull.

Skeletor breaks free of this unlikely confinement, but before he can take over Superman’s weak and feeble brain again, the Last Kryptonian snatches him up into the air, where Skeletor promptly vanishes.

Oh yeah, Beast-Man and Man-At-Arms are in this too. They do stuff.

Study question: Does Eternia have the exact same yellow sun as Earth, or what?