I'm Back, Having Overcome Insurmountable... Never Mind, I'm Just Back 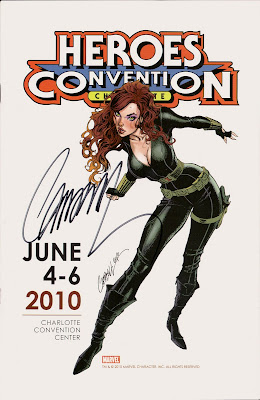 As discouraged as I am by the loss of the contents of my thumb drive, I feel very strongly that I need to go ahead and get back on the horse before I lose my motivation to write entirely. Actually, I may not have lost everything. Well, I didn’t lose everything – all of my posted pieces can obviously be copied and pasted. What I mean is that as I write this on Friday night Jeffistopheles now has the offending (or offended) flash drive and thinks he can get everything off of it. I sure hope so. There were ten or so unposted toy reviews (the one about the TRU-Exclusive Force Unleashed sets breaks my heart because I really liked it), the middle part of the Heroes Convention piece (which I am definitely not going to try and rewrite) and I don’t even know how many works-in-progress.

I’ll go ahead and tell you that the world isn’t missing out on any great adventures with the Heroes thing. We had fun there, but it just isn’t the same atmosphere as Dragon*Con. It’s an actual, for-real comic book convention. While that is awesome in its own way and draws a much more extensive guest list as far as comic creators go, Heroes just wasn’t as… entertaining. Maybe because it was Sunday, maybe because we weren’t there to party – I don’t know. Things just seemed a lot stiffer and less wacky. Don’t get me wrong – I plan on going next year at least for Friday just to catch all the artists who don’t do Dragon*Con and likely won’t have anything to do with Wizard World (you’d be surprised at how many creators are still sore over the 2005 fiasco).


It was pretty cool being there on what I’m guessing was a less busy day. I’ve been following a fantastic blog called ComicTwart (right here on Blogspot, no less!), and got to speak with two of my favorite contributing artists – Francesco Francavilla and Tom Fowler. Both were very pleasant (Francavilla’s wife especially so – super-nice lady) and had some pretty cool prints available. 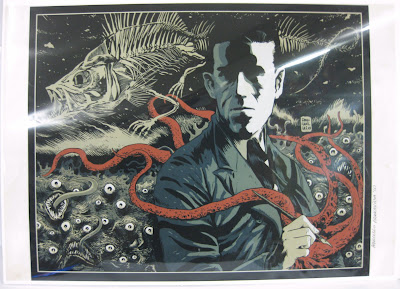 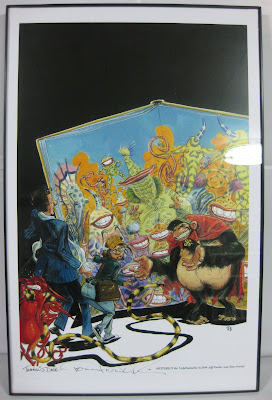 Fowler even had some original pieces from his ComicTwart contributions (including a kick-ass John Carter piece), but he was such a nice guy I didn’t want to deal with the whole process of asking about something that is too expensive and then having to come up with a diplomatic way of turning it down. You fellow con-goers know what I’m talking about. I was on a pretty limited budget since this was an unplanned visit. I still managed to blow most of what I had set aside, though. I will never claim to be a wise or thrifty nerd.

I also got to speak to Tom Feister. He has done some of my favorite GI Joe covers ever, most notably the first five issues of IDW’s Origins series. I bought prints of all five last year at Dragon*Con, but they all got ruined in the flood. They were sitting on the floor, framed, ready to be hung. 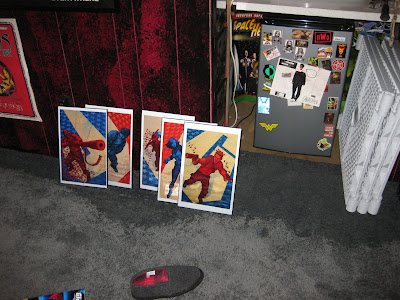 I tracked down his e-mail address and sent him a message and pictures of the damage. He responded that he lived in the area, as well, and had gotten some damage. He’s been really cool about replacing the prints, but the time just hasn’t worked out for us to meet up yet. He invited me to the studio he works out of, but that seems like imposing to me. I don’t want to interrupt this guy’s life. We spoke briefly and got updated on our flood recovery. He didn’t have all five prints, but said he would pull some aside to have at Dragon*Con. I think he felt bad for not having any there, but I told him that this had been a last-minute plan for us.

While it was really cool talking to the ComicTwart guys and a few other artists, and Lil’ Troublemaker got some cool freebies; the big high point for me was the presence of J. Scott Campbell. I cannot explain why I like this guy’s art so much. I mean, everybody should like Danger Girl – it’s basically James Bond with titties. That’s probably too dismissive of a great comic that utilized and mocked every aspect of super-spy media simultaneously; but come-on, that’s the draw. Just look at the covers: 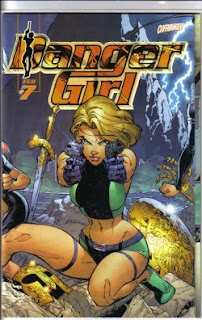 It’s once those images sold you the book that you got into it and found out how fun and clever it was.

What I’m talking about is Campbell’s style. It should by all accounts be waaaaay too anime-influenced for my liking. But I love the guy’s stuff. Actually, that’s not entirely true. I really can’t stand the covers he has done for the GI Joe Classic trades from IDW. I don’t know what the problem is, but they bug the crap out of me and this is the first time I’ve actually said anything about it. Other than those, though, I am a complete sucker for Campbell’s artwork. I don’t even have any particular like for Black Cat and I bought the print he was offering: 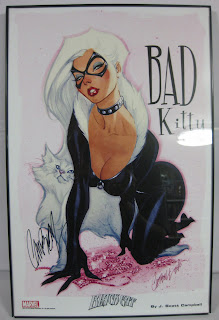 I really wanted the one of Black Widow that he did for the show, but apparently Marvel nixed that at literally the last minute. The people who run the con were ready to go to press for prints, t-shirts, etc. when the word came down that Marvel was not going to let them use that image for anything other than promotion. Dicks. So I bought a Black Cat because I really don’t give a shit about Mary Jane Watson no-longer-Parker and you can’t frame a sketch book (which, by the way, is by far the nicest sketch book I’ve gotten from a convention).

And this brings me to another point. I spent forty bucks on a print and a sketch book (both of which I feel were worth it) and had Campbell sign those, the convention booklet (I really had to have that Black Widow signed) and the Danger Girl tattoo on my arm. Four items is brutally excessive for me. At that point I feel like I am a nuisance and cutting into other people’s time; but considering one of those items was a permanent, life-long expression of my admiration for one of the man’s intellectual properties I really didn’t feel it was a big deal. Campbell was certainly flattered and impressed. In summary: I spent forty bucks on the guy because I appreciate his work and his time. Almost every other dickbag in that line had a huge stack of comics that that man sat there and signed with a smile on his face. And you know what? None of them spent a dime. Those motherfuckers walked right by his swag, plopped down a giant stack of comics that this man was going to single-handedly increase the value of, and with barely a thank-you walked off with their fucking rolling suitcases full of soon-to-be eBay fodder. And you can’t tell me that these jackholes really needed to have an entire run of Gen13 autographed for their lives to be complete. Or can you? Is that a thing? If I hadn’t lost them in the flood, I would have brought the first issues of that and Danger Girl and been done with it. I just can’t imagine needing a signed run of anything for personal reasons. I really wanted to punch those fuckers. And you know what else? Even if they did get those huge stacks (I’m talking like over forty books, here) signed just to keep for themselves, they still owed it to the man to shell out for something .

Sorry. I didn’t mean to go off like that, that’s just one of those things that really gets to me.

So anyway, we were travelling to the convention from Wilmington on the way to Atlanta. We didn’t even get to Charlotte until about 2:00 and things were scheduled to end at six. We didn’t have enough time to see everybody we wanted to, but some of them will be at Wizard World and Dragon*Con.

On the toy front, Heroes Con has to be considered a fail. I think that’s mostly because it was Sunday. I was looking for Trap-Jaw, Robin and Lobo; as well as my usual list of Marvel figures I missed. I came away with Timothy Dalton’s character from Doctor Who. 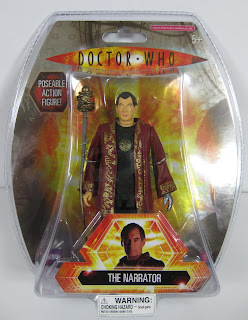 That’s great and all, but I was surprised that was all I could find. One guy did have a couple of Marvel figures I really want – Rogue and Ms. Marvel – but they were loose and he wanted more than I thought was reasonable for loose figures. I’ve still never even seen an Ultimate Iceman from the same series as that Rogue. Then again, with the drizzling shitstorm that was Ultimatum, I’m not sure I care as much as I used to.

On a happier note, we finally found a Wonder Woman for Lil’ Troublemaker. You’d be surprised how few figures there are of comics’ #1 lady.

As six o’clock drew near, we gathered up our swag (and our son) and headed for the door. On the way out I grabbed a Dragon*Con flier that announced Stan Lee as a guest. I thought that would be quite a big announcement for the ol’ Facebook page, but somebody beat me to it (damn you, Hornsby!). 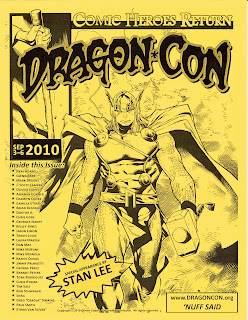 Campbell said he would be there, so hopefully I can get the sketch I wanted. I’m just not sure how much I’m willing to spend. I’m certain his asking price will be just above that amount. I almost shit my pants when I got a quote from Daniel Brereton last year. I’m not saying those guys’ talents aren’t worth it, I personally just can’t justify spending a huge sum of money for a sketch.

If anybody was curious, you can buy those 11x17 frames at Walmart for four bucks. They fit most con prints perfectly.

Wow. I didn’t mean for that to turn into the final day of our trip, but it sure did. Come back tomorrow for a review of the elusive He-Man/Superman 2-pack that I managed to find at a Toys R Us in Wilmington. He-Man has a pink belt! Awesome!

Also, on a more discouraging note, we still haven’t been able to find this: