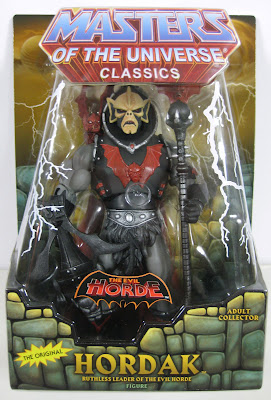 Here we go again with another figure from the toy line I never intended to collect.


Hordak was the first figure Mattel offered that gave me pause. I never had the original figure as a kid, but always dug his design. I’m just a sucker for toys with big ol’ skull heads. When I saw Matty was going to be redoing him in the new style, I briefly considered it before deciding that I didn’t want to start collecting a new line and that it was priced somewhat beyond what I consider to be reasonable.

Then that damned Scareglow came out and I got hooked.

Mattel has given almost all of the Masters of the Universe Classics releases thus far a second run (with the exception of Scareglow – am I the only one who loves him?) due to near-instantaneous sell-outs. Hordak was offered again on the 4-19 sale, so I ordered him.

I have developed a new strategy for these things. A lot of people complain about the ridiculously fast sell-outs, but I think Mattel is handling this brilliantly. They have created an artificial demand for their product while supplying fair amounts later on. If something sells out quickly, you are going to have another opportunity to get it roughly six months down the road. That’s why I’m not really sweating missing out on Trap-Jaw in March, and didn’t even bother with Evil-Lyn in April. Mattel has already confirmed a second run of Trap-Jaw – likely in September – and if I decide I want an Evil-Lyn I’ll get her in her inevitable second run.

Here’s the key: patience. First runs are frustrating and tend to sell out in under ten minutes (Evil-Lyn went in about seven); second runs hang around for a few days before they sell out because the hardcore nuts either got the figure the first time or paid way too much on the secondary market (up to sixty bucks!). So I’m not sweating them anymore. If there is a first run character I want that hangs around for a day I’ll go ahead and order it because that likely means Mattel won’t be making more any time soon. Otherwise, I’ll wait. I have a feeling Optikk is going to be one that lingers past that first couple of hours. He’s cool and all, but I don’t think he’s got quite the same appeal as most of the others.

But for now, here’s Hordak!

First Glance: This guy really fills up the packaging. I dig his design, but I’d like to see a re-imagining someday with a little more color detail. However, since this line is about updates rather than reboots (like the frustrating 2002 line), ol’ Hordie looks pretty slick. As Angry Matt pointed out – “That guy really has a gargoyle thing.” 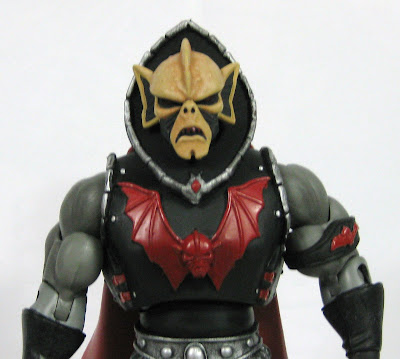 Sculpt: I think Hordak has more original parts than anybody I’ve seen so far. I haven’t collected the whole line so I’m not positive; but I believe in addition to the unique head sculpt he is sporting new forearms, torso, chest and calves. Not to mention his fantastic cape/cowl combo. Everything looks just as great as we’ve come to expect from the MOTU Classics line. 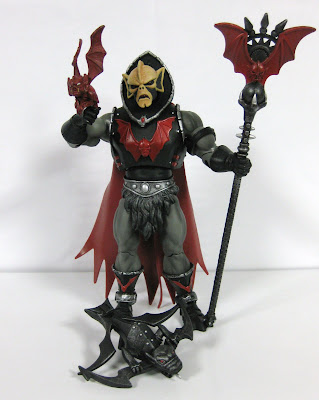 Design: All the colors look like they’re supposed to. I mentioned above that I’d like a bit more detail in the paint, and I think Hordak’s head would benefit the most from this. It looks all creepy and skully and everything, but a little highlighting would go a long way toward making him look less… Dollar Tree-ish. The only real flaw here is a red paint smear on the back of his cowl that isn’t a production flaw but a factory error. It’s bugging the shit out of me, but I’m afraid to try and scratch it off. At least it’s on the back. 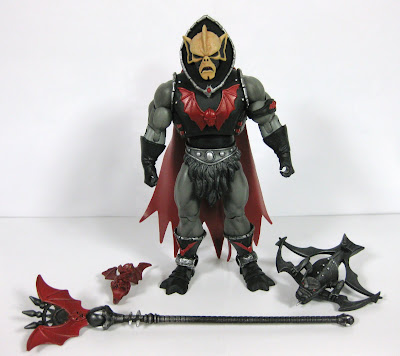 Accessories: Hordak comes packed with a gargoyle staff, a gargoyle crossbow and – surprise! – a gargoyle. As cool as they are conceptually, these accessories represent the first major issues I’ve had with the MOTU Classics line.

Let’s get the pet gargoyle out of the way first. It is well sculpted and detailed, but is kind of awkward to position on Hordak. I think it is supposed to sit on his wrist, but there is no way to do this without it looking kind of weird. As you can see in the pictures, I went with perching it on his fingers like a parakeet or something. I think this works. 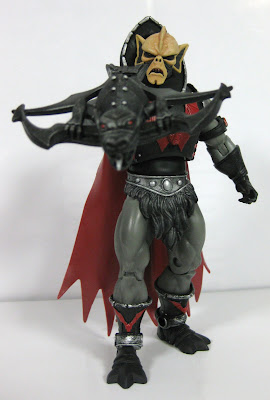 The crossbow and the staff are the real problems. The crossbow looks a thousand times cooler than the one the original Hordak cam with, as it actually has an arrow head in the mouth as opposed to looking like a melee weapon you would just sort of thrust at somebody. This would be great if Hordak could actually, you know, hold the fucking thing. Unfortunately, his hand is sculpted too open to do so and the crossbow is too heavy to let you get away with just kind of sitting it there.

The staff really pisses me off, and it is the victim of my biggest complaint against almost every single fucking toy line that is in production today, from Star Wars to Marvel Legends to DC Universe Classics. Toy companies absolutely, positively need to take just a fucking second and actually look at their packaging before it goes into production to make sure that it is not going to fuck up the toy that is inside! FUCK! I am so fucking sick of getting a new figure and seeing that it has a mashed-up head or a twisted hand or – this is the most common affliction, to the point where I see it in about sixty percent of the figures I buy – a leg that is bowed out at the knee joint and won’t permit the figure to stand properly. This shit is absolutely unacceptable! And yet we continue to buy because what choice do we have?

If you haven’t guessed by now, Hordak’s staff is mis-shaped due to the way it was packed. FAIL! 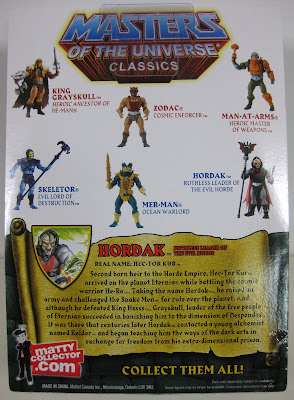 Packaging: The standard MOTU Classic blister that you open and throw away. It looks nice, but as an opener; I really don’t care unless it is resealable. In this instance, though, it fails. See above. 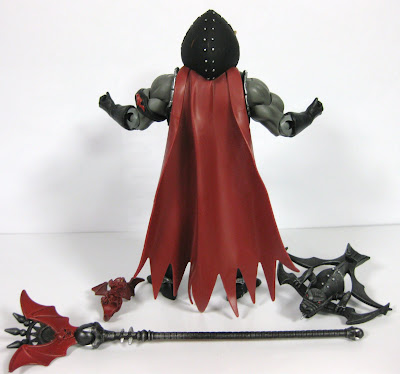 Overall: Hordak looks pretty magnificent once you get him set up next to your other Masters of the Universe figures, but I am kind of dissatisfied with the little problems he has. I’m not sorry I got him or anything and probably wouldn’t even categorize this one as a let-down; it’s just disappointing to have so many minor issues with one figure.

Hordak is sold out on MattyCollector.com, but you can still snag one from BigBadToyStore or get ripped off by the douchebags on eBay. Hey, he’s Hordak. If you want one, you should get him.
Posted by Phantom Troublemaker at 3:44:00 PM