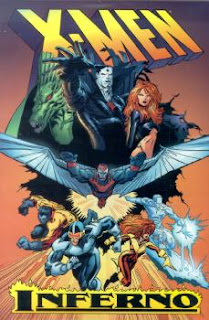 I first started reading Uncanny X-Men somewhere around issue 230. I don’t remember where I got the first issue I bought or what drew me to it, I just know that the Brood story is what hooked me. As a matter of fact, the cover depicting Wolverine infected with a Brood is one of my favorites of all time. I even bought a statue of it, and I’m not a big statue guy.
The next major story arc was a BIG one. It crossed over into the other X-titles – something that was much less common back then, therefore a much bigger deal – and even showed up in Amazing Spider-Man and a few other non-mutant books. It’s name was Inferno and it was a motherfucker. Inferno was probably the biggest factor in my decision to start collecting comic books regularly.

Chris Claremont was the writer on Uncanny X-Men for a long, long time. His reputation nowadays is maybe not so great, but he is my favorite comic writer of all time simply for the fact that his entire run on Uncanny is one long, continuous arc where he made payoff after payoff for every event that took place. There are very few titles that have had as strong and consistent a continuity as Claremont’s run on Uncanny X-Men. Preacher, Sandman and Ultimate Spider-Man are among the few that come to mind. You’ll notice those titles all had a single writer for their entire runs. I think it is incredibly rare to see the same writer for more than fifty issues of a mainstream comic and I think many of our modern titles suffer because of that.

Marvel recently released a hardcover edition collecting all of the primary titles involved with Inferno. There was no question that I was going to buy it, and since I had never read the story in its entirety – only the Uncanny and X-Factor stuff, I thought it would be cool to put my thoughts out there about how well it has held up and why I loved it so much originally. 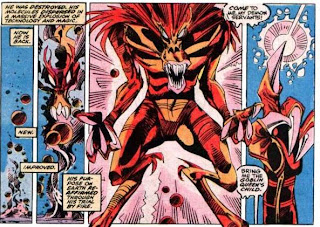 Inferno encompassed Uncanny X-Men, X-Factor, New Mutants and a mini-series called X-Terminators and combined the writing talents of Claremont and Louise Simonson, along with pencilers Marc Silvestri, Walt Simonson, Bret Blevins and whoever penciled X-Terminators. Each title had its own portion of the overall story to tell, but as events progressed the individual stories became more closely woven together until the final portions were leading directly into one another. 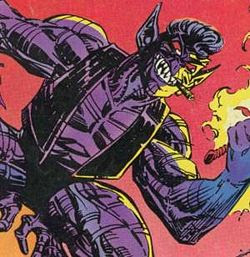 The story itself is still great. It basically boils down to your classic love triangle, but with mutants, demons, evil geneticists and baby sacrifices. Scott Summers married Madelyne Pryor after Jean Grey died. Jean Grey came back (of course) and Scott just kind of dumped Maddie and their newborn son, Nathan Christopher Charles Summers (Cable); who he obviously hated anyway or he wouldn’t have burdened him with such an unwieldy name. Cyclops’ douchebaggery pretty much sets off apocalypse (the event, not the villain) and it’s up to Marvel’s Merry Mutants to stop it. This is just the central storyline, there are also extremely significant events involving Magick, Angel, Havok and a certain slimy motherfucker named Cameron Hodge; one of my personal favorite X-Men antagonists. We also get the lead-in to a new group of mutants joining the New Mutants in the form of the four-issue limited series, X-Terminators. 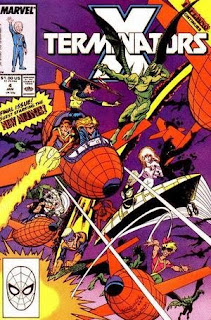 X-Terminators is relatively awful. I had not read this mini-series until now, so at least I wasn’t re-reading crap. I’m not sure if it was focused towards a younger demographic than the normal X-titles, but it sure came off that way; which makes no sense given that you would have no idea what the fuck was going on if you read X-Terminators by itself. The title revolves around younger recent introductions to the X-books. Rusty, Skids, Boom-Boom, Rictor and even younger former Morlocks Artie and Leech. We are also introduced to an annoying little deus ex machina named Taki who has a technology-based power. They should have just used Forge in this suckass’ role. Overall, X-Terminators is juvenile and features sub-standard art, especially when compared with Walt Simonson, who was at his peak on X-Factor; and Marc Silvestri, who was constantly setting new standards of cool over in Uncanny X-Men. I get the necessity of setting these characters apart before having them join the New Mutants, but man, X-Terminators is just painful to read. It isn’t strictly necessary to the overall Inferno story, but it is a good idea for a subplot. It could have been very good if it had been done differently. 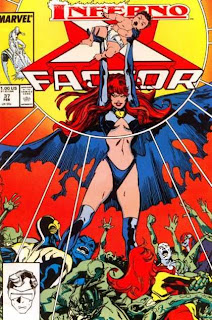 The other portions of Inferno fall in line with what you expect from the respective titles. The only real negative other than X-Terminators is just the storytelling style of the late 80’s. Jeffistopheles and I were recently discussing older comics and he surprised me by saying he didn’t ever go back and re-read anything. I’ve got a decent little collection, and from time to time I’ll read old GI Joe, Claremont X-Men, Batman or various other late-80’s/early 90’s titles. Jeffistopheles’ reason was not a bad one, though. We’ve been spoiled by intelligent comics lately. Today, if Wolverine is fighting say, Pyro, we might get a cool splash panel with two dynamic characters facing off over a highly detailed background and a couple of word balloons explaining the motivation for the fight or maybe even just some menacing words. It’s just a given that the readers are familiar with the characters and their abilities, and have at least a basic knowledge of the story that got us to this point. In 1987, however, you would get tiny versions of Wolvie and Pyro on a plain green square surrounded by word balloons stating “Now I will burn you by using my mutant ability to control the flames produced by these devices on my wrists that were designed by a scientist in Australia – which is where I come from – to produce flames. I will do this because many years ago, I joined Magneto – who has the powers of a magnet – and the Brotherhood of Evil Mutants in a quest to ensure mutants eventual dominion over Earth and the weaker homo-sapiens who hate and fear us because we are mutants!” 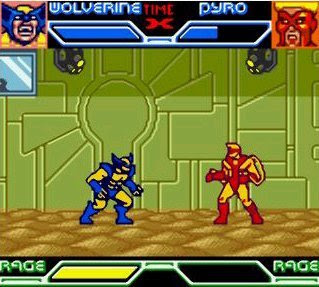 “Hah! Your flames may burn away my flesh, but I am the best there is at what I do and what I do ain’t pretty but I do have a mutant healing factor that will heal me and then I will slice your nether regions apart because I am one of the X-Men, the students of Professor Charles Xavier, who had a dream of mutants and humans coexisting peacefully so I will beat the fuck out of you now! Plus, my memory is all messed up! Bub!”

Or something to that effect. And you would get this EVERY SINGLE ISSUE. Comic companies apparently used to feel the need to contain the entire backstory of each title within the dialogue, as well as have each character explain their powers and history at least once per issue. This was kind of irritating back then, now that we’re used to better presentation and storytelling it’s just plain insulting. So Jeff has a point.

I can overlook that stuff in favor of a good story, though. And the bottom line is that Inferno is a good story. Really good. 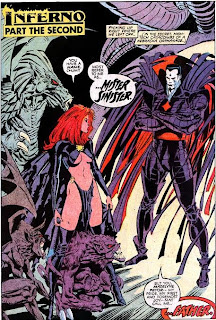 Unless you are a fan of the story, I can’t really recommend shelling out seventy-five bucks for this hardcover volume, but you can probably track down an old trade or just wait for this one to get the paperback treatment. Either way, though, Inferno is a must-read.

4 out of 5 Differing Interpretations of S’ym

The follow-up, X-Infernus was pretty awesome, too and led directly into the great new New Mutants series. And I'll usually take any opportunity I can to post this picture because it is fucking rad: 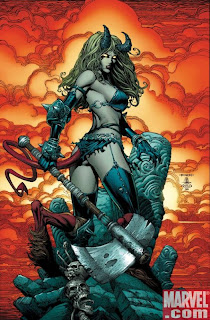 Until next time, stay creepy