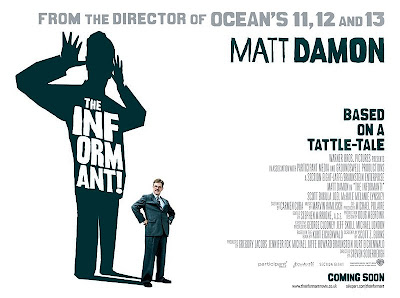 This review may or may not contain mild spoilers about this movie. Proceed at your own risk, but remember – I’m the good guy.

So there.
This was almost another one of those Netflix rentals that sat around for weeks clogging up our queue. You know how every once in a while you get a movie and by the time it comes you’re just not as jazzed about seeing it as you were when you added it, so it sits there on top of the entertainment center for a week. Then you remember it’s up there, but it still takes another week or two to work up to watching the damned thing; all the while knowing there are other movies that you can’t get until you send this one back, but you don’t want to just return it without watching it because that would be like cheating or something.Okay, so The Informant! was totally one of those movies. But we finally got around to watching it this past weekend (well, I did – Mrs. Troublemaker fell asleep. Consider that her rating.) and it went back Monday. Was it worth my time? Find out… NEXT!

The Informant! is the story of a few years of the life of a biochemist-turned-executive-turned-F.B.I.-informant named Mark Whitacre. Stephen Soderbergh directed and it stars Matt Damon as Whitacre; along with Scott Bakula, Joel McHale, Tom Papa and various and sundry other character actors and comics. You’ll notice Patton Oswalt, Paul F. Thompkins, the Smothers Brothers and more.

Whitacre is an executive who is handling a crisis regarding the product of AMD – a food processing corporation. Events transpire that require government involvement in the form of Scott Bakula’s F.B.I. agent. And that’s where things start to get a little weird. As the narrative goes on, Whitacre becomes progressively more paranoid and deluded until we get to the big climax. If you watch this one, hang in there because the big revelation is hilarious and rewarding; and a new character – Whitacre’s lawyer – is even introduced to share in the audience’s incredulity. That’s right - things get so ridiculous that the narrative requires a new straight man to level it all out.

Matt Damon is terrific in the lead role. The turn his character takes over the course of the movie is surprising and subtle, and Damon handles it incredibly well. You really feel for his poor schlub in the beginning, but by the end… well, you’ll just have to see. Throughout the movie we get some interior monologues from Whitacre that really flesh the character out and help illustrate how his brain works in a way that no amount of Acting! on Damon’s part could. 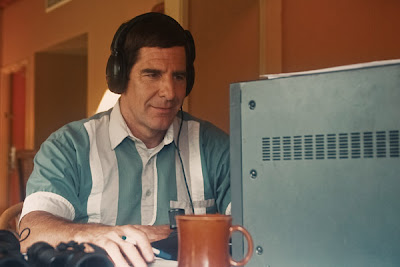 I suppose I would consider myself a Scott Bakula fan. If the guy showed up at Dragon*Con I would definitely be looking for an autographed something or other. I was an avid follower of Quantum Leap when it first aired, I thought he was great in Lord of Illusions and he is one of those guys that I see as a reason to watch something. Hell, I’ve even endured a few episodes of Enterprise based mostly on the level of Bakula involved. If you like Bakula, you will be happy with him in The Informant! as the F.B.I. agent who does his best to pursue the truth and what is right as he sees it. He is later joined by a subdued but effective Joel McHale. I like the guy, but I’m not as familiar with him as the Missus – an avid Talk Soup watcher.

Also of note are Tom Papa as the son of a big AMD executive and Melanie Lynsky as Whitacre’s wife. These are both subtly great performances that show how secondary characters can really tie the fucking room together – so to speak. Papa plays his comparatively minor role with an irresponsible glee. I hadn’t even heard of the guy until Rob Zombie’s El Superbeasto feature, but having since seen his stand-up and now his performance here; I’m ready for more of Papa.

Lynsky – who I am completely unfamiliar with – has one of the most powerful scenes in the movie as Whitacre’s blindly supportive wife. I’m not going to get spoilery, but it is a big moment of revelation. She actually has two critical moments, but the impact of the first isn’t apparent until later in the narrative. 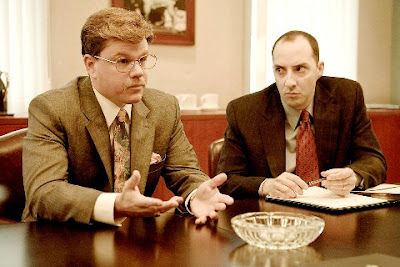 One last actor I would like to mention – out of many great performers – is Tony Hale. You may know him as Buster from Arrested Development, but in The Informant! he plays Mark Whitacre’s put-upon lawyer. If there is anybody in the movie you really feel for and identify with, it’s him. His facial expressions alone are worth the viewing.

Marvin Hamlisch provides a whimsical score to the movie, featuring some loopy, James Bond-ish pieces and a heaping helping of seventies game show style instrumentals. Which brings me to my only real complaint about The Informant!

The movie takes place in the early nineties, but for some reason Soderbergh has chosen an extremely seventies-style presentation, from the credits to the title cards to the music. All of these things are well done – particularly the music, which I am planning to purchase as soon as I can find it – but they are very disorienting for a story that starts in 1992. The movie is even shot in a style evocative of seventies dramas. It doesn’t spoil the movie or anything, I just found these things to be somewhat distracting and odd choices.

Overall The Informant! is a fun experience. I’m not going to recommend you run out and buy it or anything, but you should definitely check it out when it hits cable. One viewing should really be enough.