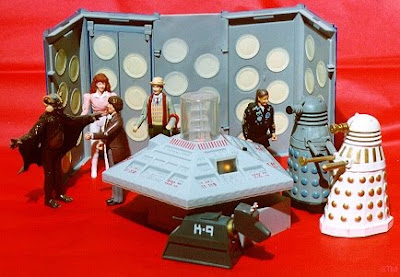 As befits a dork of my particular interests, I am ending this week of Doctor Who celebration with an article about toys. Enjoy.When I was a kid, I literally would have chewed my best friend’s foot off (sorry, Jon) to get my grubby little hands on some Doctor Who toys. Now, I don’t know why anybody would have made that demand of me to get those little plastic figures; but they would undoubtedly have been British because the United Kingdom is the only place you could get the damned things. You must understand - back in the eighties, not only was there no eBay; there was no fucking internet. There was no practical and inexpensive way to get foreign toys in America. Hell, I don’t even know how I knew they existed. But I knew. And it tormented me.


Eventually this magical, filthy thing called the internet did come to be and we had unprecedented access to the wares of the world. The problem was, time had passed and the value of those toys had shot up in direct proportion to the new worldwide accessibility and demand. The original Doctor Who toys produced by Dapol had ceased production long before internet usage became widespread, so the relatively small supply in the U.K. was going for a premium. One single figure of Tom Baker’s fourth Doctor would go for around sixty bucks – loose, no less! I don’t know about you, but I didn’t have sixty bucks to throw around on one used toy when I was in my early twenties. Hell, I wouldn’t do it now (not for a single, loose 3 ¾” figure, anyway). So still, no Doctor Who toys. 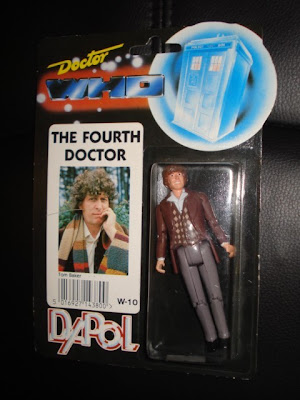 The relaunch of the show in 2005 brought a ray of hope, especially once news broke that the Sci-Fi Channel was going to broadcast it. Not only was there a good chance new toys would show up, they might even hit America! The toy marketplace is more advanced and diverse now than ever before. There is almost literally no toy currently produced on this planet that you can’t get your hands on for a relatively decent price. Even if new Doctor Who toys didn’t see American distribution, somebody was bound to import them. Little did I know that somebody would end up being my parents.

For reasons I completely understand, my parents have never really gotten my toy habit. It’s okay. Collecting action figures of comic book heroes, movie monsters and robots isn’t exactly standard adult male behavior. So I don’t get baseball or NASCAR. Sue me. In the same way that your average grown person doesn’t get toy collecting; I don’t understand devoting vast portions of your ever-deteriorating brain to the memorization of sports statistics from 1972. Or watching people go left. Whatever. To each their own. I accept my hobby as the oddity it is perceived as, I don’t talk about it at work or anything (God forbid).

So anyway, my parents – who travel a good bit (and good for them) – came back from the United Kingdom a few years ago with gifts in tow, as is their wont. They brought Mrs. Troublemaker this pretty Irish doll to go in her ever-expanding doll case. They brought Otis – our boxer – a shirt (that he wasted no time in devouring), and they brought me… DOCTOR WHO TOYS! I thought my head was going to explode. I can’t honestly say my folks have ever discouraged my hobby, but this support was extremely unusual. I still think it had something to do with them approving so strongly of my choice of wife. 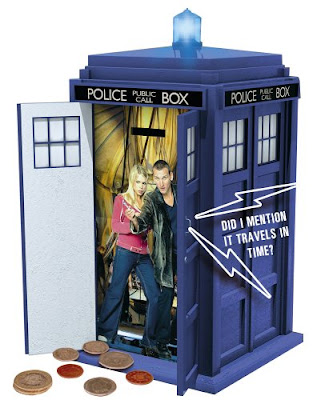 Contained in a plastic bag from a very specific London toy store (I can’t remember which one – I saved the bag but we lost it in the flood last year) were a TARDIS electronic bank and my first-ever figure of the Doctor. I was absolutely fucking speechless. The bank is much cooler than any bank you’ve ever seen. Not only does it light up and produce phrases from the show, it is scaled to work with the figures, so it doubles as a sort of playset. Granted, you can’t put anything in it (except money), but it sure does look great sitting behind the figures. The figure of the Doctor was something else entirely. You see, Christopher Eccleston was still our Doctor in the U.S., but across the pond they had already been introduced to the tenth Doctor, one David Tennant. And this figure was him. In a moment of toy awesomeness unrivaled even by the Star Wars Episode II Sneak Peek Jango Fett, I had a figure of a character who – by United States standards – didn’t even exist yet. I immediately jumped up to go put this trophy in my toy room, because it’s unseemly to have an erection in front of your parents.

Since that wondrous day I have greatly increased my Doctor Who collection. Look at all those fucking Daleks! Not only has the line found U.S. distribution, but several of my favorite online toy stores are importing items directly for very reasonable prices. The primary line has been so successful that Underground Toys – the licensor – is now dipping into that treasure trove of collector’s items: nostalgia. That’s right - with their Doctor Who Classics line, Underground is revisiting the original series and has already produced figures of the first seven Doctors; old-school nemeses such as the Zygons, the Robots of Death and the Sea Devils; and classic versions of Cybermen and Daleks. 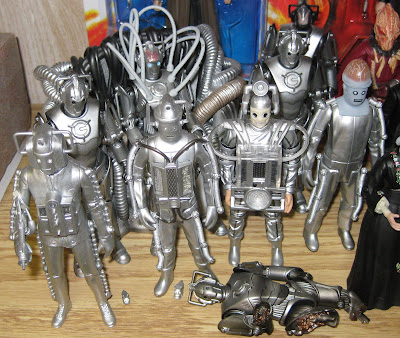 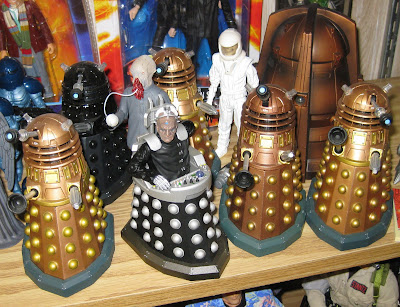 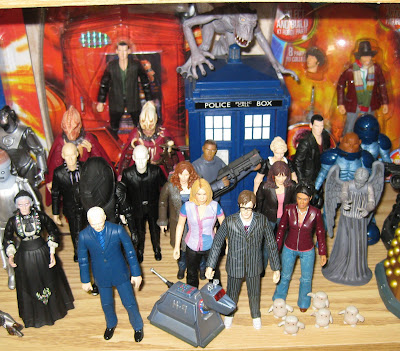 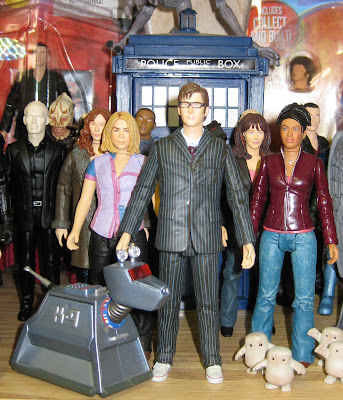 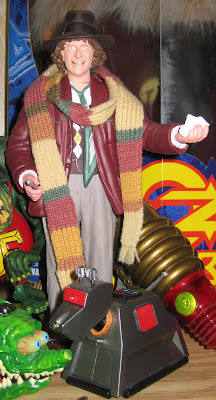 Doctor Who Link of the Day:
BigBadToyStore.com 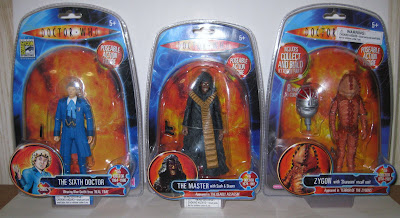 These came yesterday, so I thought I'd throw some pictures on here. It's that damned sixth Doctor in his less loony blue attire as seen in Real Time, the decomposing Master from The Deadly Assassin and a Zygon from the first regular Doctor Who serial I ever saw - Terror of the Zygons. 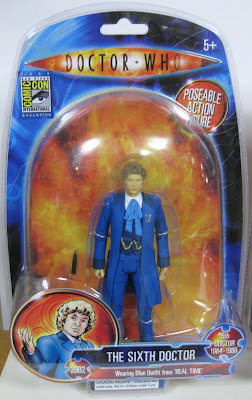 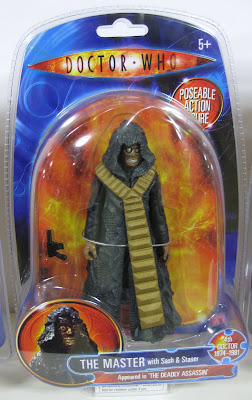 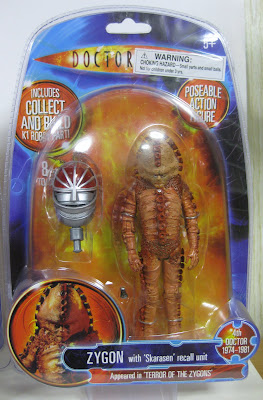 Posted by Phantom Troublemaker at 2:39:00 PM