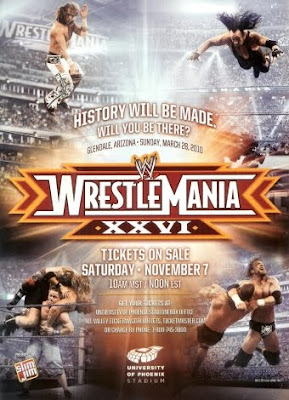 I hope I can make this more exciting than I think it’s going to be. If not, I apologize in advance. You can get a better version over at Dork Droppings, where Gnoll and I did a podcast about the event. Extra-special guest the Midnight Rider showed up to provide some unique insight, as well.

I honestly don’t pay attention to wrestling like I used to. I know what’s going on for the most part, but I tend to watch the shows while I’m doing something else. Like posting things on the internet. NXT is pretty much the only one that I will actually sit down and devote my full attention to. We’ll see how long that lasts.

Anyway, having said all of that, I do believe I am more excited for this year’s WrestleMania than I have been in a while. Possible since XVII. WWE, while not necessarily doing a great job at storytelling, has managed to create some intriguing matchups that have a whole lot more interesting buildup than any ‘Mania in recent memory. With nine can’t-miss matches announced so far, this is the most packed one, as well. Let’s take a look after the jump.

Jack Swagger, because it’s high time to give this guy another shot.

CM Punk goes over because that provides more intriguing story possibilities. Now the hair versus mask match that everyone thought this would be can happen at Backlash or, better yet, after months of Rey torture at SummerSlam.

R-Truth and Morrison win, because Miz and Big show are a great tag team and – as we all know – WWE hates great tag teams. Show turns face and feuds with Miz until the Draft, when Show goes to SmackDown and turns heel again.

Randy Orton wins against his jilted former lovers. He takes his recently discovered babyface cred and drops it in the shower, heeling again after weathering what will come to be known as the Summer of Silence.

HHH wins. I guess. I dunno.

Mr. McMahon is a natural born dickhead and Bret has had to perform some kind of dickheaded chicanery to get a leg up (HA!) on him. Vince has guaranteed Bret will get screwed, but Hart will get the feel-good victory. This will happen either before or after Bret’s saucy young relatives show up to beat the fuck out of him, making them the biggest heels since Edge until WWE fucks it up.

Cena wins. Batista gets his rematch at Backlash unless he injures himself. Again.

‘Taker has to go over. The big guy deserves to retire with that streak intact. Besides, this is pro wrestling. Michaels will be unretired by SummerSlam. This will be the best match on the card, likely the best this year, unless TNA dishes up that Nasty Boyz versus X-Pac and Scott Hall dream match we’ve all been clamoring for. HA!

Jericho wins and retains. I still have faith that the mega-talented Edge can find his babyface hat and wear it well. He just needs time and motivation – like a disappointing loss to the Ayatollah to set a fire under him.

I believe I made slightly different predictions on the podcast, going a little heel-heavy for ‘Mania; which traditionally has more happy endings than an Asian spa. I’ll stick with the ones I’ve written here unless I change my mind.

Posted by Phantom Troublemaker at 2:49:00 PM