I like to make fun of Aquaman just as much as the next guy. One of my favorite comedy sketches ever is the one from The State that has each Justice League member going off to fight some major disaster and ends with, “Aquaman! Go… talk to some fish! Bwahahahahaha!”
I don’t hate Aquaman, though; especially given the fact that he is almost as awesome as Batman in The Brave and the Bold. It’s kind of like how in The Adventures of Briscoe County, Jr. you had Julius Carrey (God rest his soul) as the absolutely kickass Lord Bowler. If he had been paired up with anybody other than Bruce Campbell, he would have easily been the most awesome thing on an awesome show. Unfortunately for Mr. Carrey, nobody out-awesomes The Chin. Just so with Aquaman and Batman.
So anyway, while I derive no specific gratification from the fact that there is an action figure of dead Arthur Curry; it’s a Black Lantern and I had to have it.
This brings me to a point I’d like to make about the genius of the marketing potential behind Blackest Night. DC has set the stage to make ass-tons of money with this thing. This one saga has almost instantaneously generated literally hundreds of new character concepts that can be adapted into action figure form, many of which even casual fans will want to have. First you have the Black Lanterns themselves, which can supply new toys for years to come. Next you have six – count ‘em, six! – new Corps full of varying Lanterns to produce to accompany the coming years of dead guys. Lastly you’ve got the [SPOILER ALERT!] Lantern versions of Lex Luthor, Mera, Scarecrow, Atom, Flash and Wonder Woman; not to mention the Blackest Night-style regular versions of those characters, two of which would be simple repaints with some minor retooling for rings(Luthor and Flash). They could even do some mid-transformation variants on the cheap. And don’t overlook the fact that while DC Direct will certainly produce a ton of these things, Mattel is sure to dip into that honeypot at some point as well for their DC Universe Classics line. Well played, Distinguished Competition. 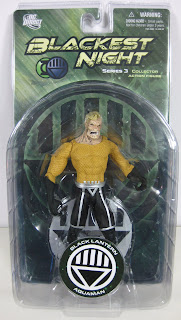 First Glance: Aquaman definitely stands apart from the other Black Lanterns offered so far, and I can’t say whether that’s good or not. While Martian Manhunter and Superman Prime are more subdued and mostly black, Mr. Curry sports a dulled-down version of his traditional scaly orange shirt. It looks really great, but makes him seem a bit less sinister. His fugly, rotten face pretty much makes up for it, though. 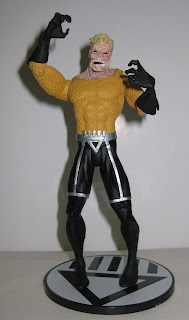 Sculpt: Nobody is better than the folks at DC Direct for creating artist-specific versions of comic book characters. Dead Arthur Curry looks just like Ivan Reis drew him. He has limited articulation to preserve the aesthetics of the sculpt – standard knees, hips and elbows with ball-jointed shoulders and neck. He is, like the other Black Lanterns, posed in what I like to refer to (as of right now since I just came up with it) as puppet zombie style. I will say that I’m not all that crazy about how they posed his arms. You can’t really do too much with them and if you raise one it just looks like he’s waving, which is inappropriate. Larfleeze had similar issues in that he couldn’t clutch his power battery quite like he did in the comics, or squat for that matter. I used to have a more of problem with DC Direct’s lack of articulation, but now that we have Mattel’s excellent DCUC line it doesn’t matter as much. DCD can make the more complex artistic interpretations ( not to mention characters that can’t be made from farmed parts like Larfleeze and Kryb) and Mattel can produce the super-articulated, generic crowd-pleasers. The awesome thing is the scales pretty much match, so they can all hang out. 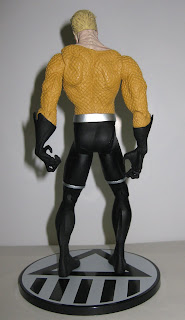 Design: Just like the sculpt, the deco accurately represents what we saw in the comics. His shirt really does look awesome.
Accessories: Just the standard Black Lantern logo stand. 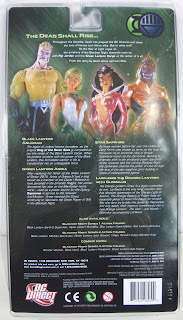 Packaging: The standard DC Direct “get your scissors and try not to cut yourself on the edges” packaging. I really fucking hate this kind of package. I get that with heavier figures like these the regular old blister-card may not suffice, but I’ve hated these clamshells ever since McFarlane started using them for the second Spawn series. 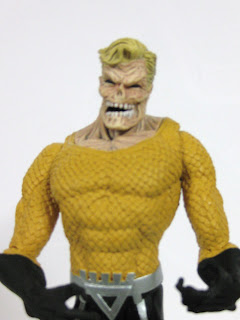 Overall: If anybody is collecting Black Lanterns and wants to skip one, it’s probably going to be the (former) King of Atlantis. I think he’s pretty creepy and great, but he really does kind of stick out amongst the current and future releases. If you’re buying them all no matter what, he’s well worth it. If you’re pinching pennies and aren’t sure, you can probably take a pass on this one. He just isn’t that exciting.
3 out of 5 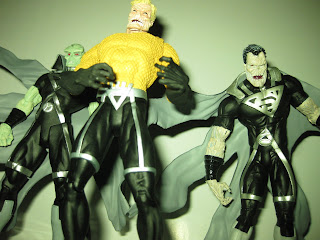 Until next time, stay creepy!
-Phantom
Posted by Phantom Troublemaker at 3:21:00 PM