I've been suffering from bronchitis for the past week, so I have been a bad blog host. You'd think being sick was a poor excuse for not sitting in front of the computer and writing, but remember: I do most of my writing at work. I was definitely too ill to be there. So here is a pair of reviews I wrote a couple of weeks ago. I'll have more good stuff this week and a whole lot of really good stuff after the weekend.

I can make no real connection between these two movies other than we watched both of them in the past week. One was fucking awesome and the other was so bland it’s actually going to be a challenge to write about it. 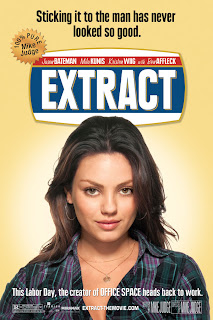 The plot revolves around Jason Bateman’s character, a moderately successful guy who runs a factory that produces extract. That is where the name of the movie comes from. You might think there is some kind of clever double-meaning there, but you’d be wrong. It is exactly as it appears, which is sort of the problem with the whole movie. Everything unfolds in the blandest way possible – from the main character’s experiences with drugs to his brief dalliance (I have never, ever used that word before) with a con artist played by the lovely Mila Kunis.

Bateman’s character is frustrated by his life. His wife won’t have sex with him, his job is dull and irritating and he has a neighbor – played by David Koechner - that is so unconsciously overly solicitous that it surpasses being funny and gets to the point where you just want to see the guy dismembered messily.

The action really picks up – or should have – when one of the workers in Bateman’s factory loses one or more of his testicles to an accident. This could have been played for cheap laughs, and by all means should have been. The guy is a company man and is happy with his disability until Kunis’ character comes slutting around to convince him to sue for millions. I would say antics ensue, but that might give you the impression that entertaining things happened; so I won’t.

Ben Affleck is in the movie playing a guy that is seemingly Bateman’s only friend. He works in a hotel bar and is kind of an irresponsible shitbag. Affleck steers Bateman towards the wrong decisions that ultimately lead us to the end of the movie. He does get the funniest moment in the whole film, though. If you decide to watch this one (don’t), it’s when Bateman and Affleck are smoking weed with this douche in an Affliction shirt (Is it necessary that I identify that guy as a douche? Doesn’t the mere presence of the shirt speak for itself?) and Kunis walks in.

Also of note amongst the cast are J.K. Simmons as Bateman’s factory manager and Kristen Wiig as Bateman’s wife. Simmons doesn’t have much to do here, but does it well. Wiig, on the other hand, is unlikable from the start. I don’t know if it is her or if you are really supposed to dislike Bateman’s wife as much as I did, but I’m pretty sure I’ve never really liked her in anything.

Extract is kind of like the equivalent of a Lifetime Original Movie for guys, except that if it was really a movie for guys it would have had explosions, titties and at the very least interesting things going on. This movie is dull and uninteresting and I recommend you avoid it. Sorry, Mike Judge. Every once in a while I have to remind myself that you are responsible not only for awesome stuff, but also for King of the Hill. Nobody can be great all the time.

1 out of 5 Ginourmous Bong Hits 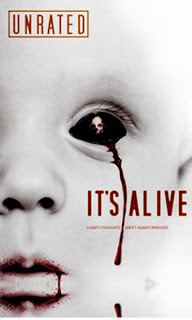 You might say that Larry Cohen’s 1974 masterpiece of horror didn’t really need to be remade. To this I say, “Shut your fucking dirty piehole!” If some genius hadn’t decided to make this movie, we would have been robbed of an absolute laff riot!

It’s Alive is one of the most entertaining movies I’ve seen in months. From the horrible acting to the wretched special effects to the insane plot, Mrs. Troublemaker and I were laughing the whole way through. Granted, the plot does follow the original fairly closely. The entertainment comes more from how the characters in the movie react to the events that take place – In ways that no human being ever would. I’m serious, It’s Alive is absurdist humor at its best. The only thing keeping it from descending to Boll-like levels of awful is the fact that the story is fairly linear and coherent.

The players in this feature include Bijou Phillips as the mother, James Murray as the father, Raphael Coleman as the crippled and entirely extraneous uncle, Owen Teale as a fantastically ridiculous policeman investigating the shenanigans and Skye Bennet as the mother’s bitchy-to-the-point-of-evil college roommate/best friend.

Our story begins with Phillips leaving school so she can have her baby. Her bitchy roommate is giving her shit about how she won’t come back to finish school and is making a mistake. I want to go ahead and point out that if a blind person were to watch this movie, they would undoubtedly wonder why an eight-year-old had been cast as the mother. Bijou Phillips has the most irritating, whiny little voice I have ever heard. Every word out of her mouth makes you wince at first. I say at first because eventually you kind of start enjoying it as just another hilarious thing about the movie. Seriously, you’ll get to the point where she can’t deliver a single line without making you chuckle.

So anyway, Phillips leaves school and arrives at her husband/boyfriend’s house (I don’t think they ever really make it clear if they are living in sin or not). Her spineless pussy of a male life-partner is played by James Murray, a guy who looked familiar but I couldn’t place. His younger brother – who is confined to a wheelchair and contributes absolutely nothing to the movie other than ten minutes of not-awesome-things-happening - is played by Raphael Coleman, a guy who looked extremely ugly but I couldn’t place. On second thought, I guess the brother’s purpose was to make Phillips’ character seem less irritating by comparison. It works. You won’t have been around Uncle Wheelchair for five minutes before you’re longing for Mom to have a lengthy monologue.

Not long after we are introduced to the house that will be the setting for most of the rest of the movie, Mom goes into labor. Three months early! It turns out Baby has doubled in size in the past couple of weeks – a fact which nobody seems overly concerned about – but the Worst Doctor in the World is there to deliver! The actor playing the Worst Doctor in the World was obviously hired more for the fact that when you put a breath mask on him he sort of looked like Mark Harmon than for his acting skills. The crack medical staff decides to perform a cesarean section on Mom, which leads to everybody in the delivery room being brutally slaughtered. This does not include Dad, since he was made to wait outside for some reason. What is this, 1950? They might as well have had the guy pacing and smoking a cigar. We don’t actually get to see the slaughter, we just see what an orderly stumbles across afterwards; as if there is some kind of doubt amongst the audience as to who did it.
The movie starts to get hilarious immediately. For some reason, the police bring K-9 units to search the hospital, despite having no traces of what to look for. Seriously, do these dogs smell evil or something? And if they do, they really suck at it because they never go after Baby. Sgt. Pecker of the Asshole P.D. shows up at this point to ask Mom if she remembers anything, despite the fact it has been made clear she was fully anesthetized through the whole slaughter.

Mom and Dad get back home in short order to start their life of domestic tranquility. What follows is an inconceivable mess of people behaving in strange ways, unsatisfying acts of violence and Uncle Wheelchair being entirely uninteresting. No less than six minutes of this movie takes place at Uncle Wheelchair’s school, where he interacts awkwardly with some little British girl who wins the Oscar for most inconsequential role in a movie ever.

I don’t want to spoil any of the pleasures of It’s Alive, but I will give you some of the more noteworthy events:

It’s Alive needs to be played at your next drunken gathering. I guarantee a good fucking time. The director of the original will tell you not to watch this one and watch his instead, but I say fuck him. Watch ‘em both!

In case you are unfamiliar with my rating system, I give what I call “Bizarro Scores” to movies that are horrible but have succeeded in entertaining me. For instance, The Room is one of the worst movies ever made; but it entertained me just as much as The Hangover. I can’t very well give them both a “4 out of 5”, so The Room would get a “Bizarro 4 out of 5”. Get it? Therefore, It’s Alive gets:

Bizarro 3 out of 5 Nipple Punctures

Until next time, stay creepy
- Phantom

Posted by Phantom Troublemaker at 6:52:00 AM