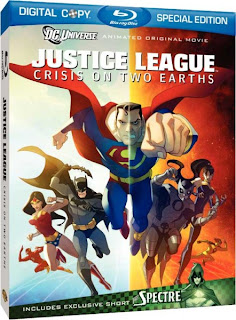 DC has been straight up kicking ass with their direct-to-home-format animated releases. Granted, I absolutely hated Gotham Knights; but everything else has been a minimum of pretty great.

Crisis On Two Earths is the best so far, but there are still a few things I don’t like about it. I’m going to go ahead and get those out of the way so we can get on with the good stuff.

First, I really strongly wish DC would just get a regular stable of voice actors for these features. Like, I don’t know, the same people from the Justice League cartoon, maybe? I understand the perceived need to stick “names” on the front of the box like Mark Harmon and Felicity (who actually did a great job as Wonder Woman). I get marketing. I just hate having to spend the first ten minutes of every fucking new feature having to adjust to new voices from familiar characters.

A Very Special Message for DC: KEVIN CONROY IS BATMAN. PERIOD. More so than Michael Keaton or Christian Bale or Adam West or certainly William Baldwin. If they could have dubbed Conroy’s voice into Dark Knight instead of using Bale’s silly Bea Arthur imitation it would have been the greatest movie of all time.

Also, Tim Daly is the best Superman, but to a much lesser extent. 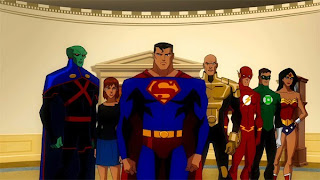 I am a little torn on the next thing I perceive as a negative: the animation style. On the one hand, I would love to see a standard adopted. Not necessarily Justice League style, but something consistent. On the other hand, I respect DC’s decision to adapt the artist’s style from specific stories like New Frontier and Public Enemies (though I personally can’t stand Ed McGuiness’ artwork, it translated very well to animation). Having said that, Crisis was not adapting any particular story. It was more an amalgamation of some older JLA stories, Grant Morrison’s awesome Earth 2 graphic novel and the story originally intended to bridge Justice League and Justice League: Unlimited. As such, I think the JLU style should have been used here. What we got isn’t bad, it just isn’t good enough to justify a departure. I think stories that could be perceived as “in continuity” with the rest of the DC Animated universe that are not adapting specific stories should have a consistent animation style and voice cast. Crisis, Green Lantern and Wonder Woman could all have benefitted from this. They’re just different enough to bother me. I especially wasn’t crazy about Christopher Meloni as Hal Jordan. I like the guy, but he wasn’t a particularly good Hal.

Okay, now that all of that is out of the way we can discuss the awesome. And there is a lot of it, especially if you get the Blu-Ray release. 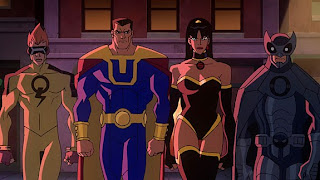 The story - adapted by the always-awesome Dwayne McDuffie - is tremendous. A heroic Lex Luthor from an alternate dimension enlists our dimension’s Justice League to help stop their evil analogues, the Crime Syndicate. The Crime Syndicate pretty much runs things over there and has eliminated the Luthor-led version of that dimension’s Justice League. But even the Syndicate itself isn’t aware of the ultimate threat posed by one of its members, Owlman (Batman’s evil counterpart). Owlman is pretty much a giant super-douche, but I guarantee you’ll hate his girlfriend, Superwoman. She is a mega-giant-super-douche-bitch-supreme. These two characters are probably portrayed more strongly than any others in the feature – and that’s really saying something because the characterizations in Crisis are particularly strong, especially after the ultra-fight-heavy Public Enemies.

In addition to the primary story, there are some nice sub-plots such as Martian Manhunter’s romantic life and the fact that the Justice League can’t get shit done without Batman. There is also a very cool sequence where Batman saves Flash’s life in a very Batman-esque manner. It was my personal favorite moment of the film, because I picked up on what was happening.

The animation is very good. I don’t love it, but I can’t really say anything bad about it, either. It is very consistent and far superior to most cartoons you would see on regular TV.

Aside from Batman and Superman, the voice cast ranges from very good to outstanding. Chris Noth as Lex Luthor and Jonathan Adams as J’onn J’onzz supply the most notable very good, while James Woods and Gina Torres are outstanding as Owlman and Superwoman; respectively. Also of note was Bruce Davison as United States President Slade Wilson(!) on the alternate earth. 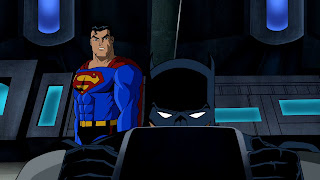 Overall, this is a must –have. Crisis On Two Earths is my favorite offering of these new DC Animated projects so far, and that is really saying something. The only thing that kept the feature from a perfect score is what I felt was weak casting for the Dark Knight and the Big Blue Boy Scout. As such, Justice League: Crisis On Two Earths gets:

4 out of 5 Totally Off-The-Wall Cameos

If a spectacular and engaging animated feature film isn’t enough to moisten your nerd-panties, then the extras on the Blu-Ray should just about do it.

In addition to the film you get:

*An animated Spectre short film written by Steve fucking Niles! Do I even need to tell you that it’s awesome? 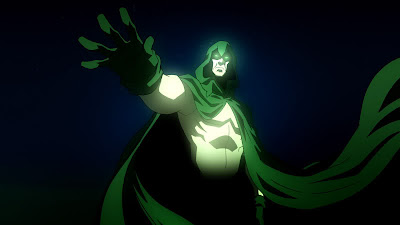 *Four – count ‘em, four! – pertinent episodes of the Justice League cartoon. Granted, many of us already had these; but it’s cool to have them directly available with this feature.

*The unaired pilot for the planned (and abandoned) Aquaman live-action show from a few years ago. I remember hearing about this, but I didn’t realize they had actually filmed it. I haven’t watched this one yet.

*Your normal assortment of trailers and plugs for other DC/Warner productions.*Plus what I consider to be the Amazing Icing on the Awesome Cake: 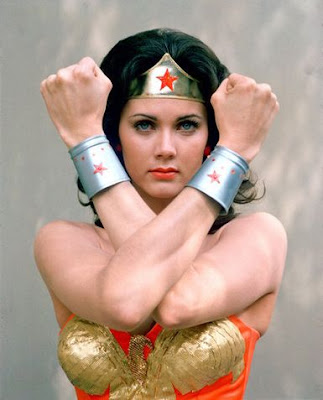 If you can get this one on Blu-Ray, do it. If not, I still recommend you watch the movie as soon as you can. The Blu-Ray release scores a

5 out of 5 Gruesome Acts Of Vengeance

Until next time, stay creepy
-Phantom
Posted by Phantom Troublemaker at 2:20:00 PM