This was my very first post on my MySpace blog. It's kind of funny, because I just re-watched the movie with Mrs. Troublemaker on Saturday night. I wanted to see if it was as bad as I initially thought, and my wife had never actually seen it. It turns out I was too kind in my review and Mrs. Troublemaker still hasn't seen about seventy-five percent of the movie.
And doesn't want to.

According to her, "That fucking sucked. And it wasn't even Indiana Jones."

Indiana Jones & The Close Encounters of the E.T. Kind
By The Phantom Troublemaker 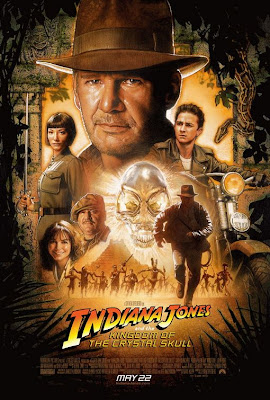 This review contains SPOILERS! Do not read it if you don't want to know the secrets of sucking that this film contains!

If you decided to check this out, bear with me. I have never written a review before, and am not entirely sure it's a good idea. This is severely stream-of-consciousness, so the format and the flow may be a little shaky at times.

I've waited a couple of weeks to write this because I really wanted to let the movie sink in. I love the character of Indiana Jones and have thoroughly enjoyed most of his adventures. I just could not enjoy this one. I thought about going to see it again, just to be sure, but I decided that my first impression was right.

Many things about this movie are awesome. Parts of it even recapture the magic feel of the first three movies. The jungle chase scene is almost perfect in tone, matching the fun and edge-of-your-seat feeling of the mine car chase in Temple of Doom. The cemetery fight with the skull-face guys is also well-done, giving Indy a chance to show that age and cunning are assets he can put to good use.

The problems that I have with the movie are huge and invasive, but if only one of them existed I might have been able to overlook it. Together, though, they were insurmountable. There were also a few nagging little issues, but that is to be expected with any film of this undertaking. Nobody's perfect.

The first problem is the story. Know in advance that aliens freak me out. To this day I maintain that E.T. (which I saw when I was 7) scared me more than any movie I have ever seen. I can't even watch Communion or Fire in the Sky. Regardless of that phobia, I feel that I am judging the story on it's merits and how it fits in to the Indiana Jones mythos, not my irrational (hopefully) fear of grays. I really just don't think an alien story works. Logically, I get where it can be justified. I personally believe in alien life forms as much as I believe in God, so a story where an ancient civilization worships aliens is not ridiculous to me. It would probably make a great non-Indy movie. I've read other reviews where it was suggested that seeing the alien at the end was going too far and that if that had been cut all would be well. I disagree. The alien thing just doesn't work for me. The other movies were about religion and mysticism, not technology. The other movies made me contemplate faith and man's place in the grand scheme. This one just made me think about how much I hate inappropriate CGI.

Which brings me to problem number two. Everything looked fake as crap! From the start of the movie where we are in front of the warehouse (which was an awesome plot point and great to see) meeting Cate Blanchett's great villainess to the campsite to the marketplace to the cemetery. It all looks fake and jarring and it throws you right out of the movie. I wish that this could have been shot completely on locations. If you look at the first three movies, they are epic in scale and locale. Every shot is real and every location feels real. You just lose yourself in the photography. Here, though, you feel like you are on the back lot from the end of Pee-Wee's Big Adventure. I hated the CGI monkeys, but thought the ants were pretty cool. The part where Blanchett crushes one between her knees is priceless.

Which segues into my closing remarks. Cate Blanchett, Harrison Ford and Shia Lebouf were tremendous. I really liked the Beowulf guy (I am at work and can't remember his name – Ray Winstead or something) as the back-and-forth traitor. My only issue cast-wise was Karen Allen. I don't want to pick on her, but she came across as someone who was an actress about twenty years ago but dropped it to be a mom. Which is apparently pretty much the case. I have no problem with Indy having a son or getting married and I loved the scene with him grabbing the hat back from Mutt. Unfortunately, the good in this movie just couldn't overwhelm the lame. After basically just abandoning Marion and his unborn son Indy can just sort of laugh it off after the UFO goes back to the "spaces between the spaces"(Leave the extra-dimensional adventures to Buckaroo Banzai, please)? Also, why did the University just hire Indy back? All of the awesome was moments or scenes, while the suck-ass was consistent and present throughout. After it was over, I called my wife and had to voice an opinion that seriously hurt me. Honestly, I felt that churning twist of the gut that is almost the exact opposite of the nerd-chills you get every time you hear the opening chords of the Star Wars theme as I uttered the dreaded words into my cell phone – "That was fucking awful." Maybe it really wasn't that bad, but lord it wasn't good.

Notice I referred to myself as "The" Phantom Troublemaker then. I don't know when or why I changed it. Maybe I should go back to that...

Until next time, stay creepy
-Phantom
Posted by Phantom Troublemaker at 5:45:00 PM